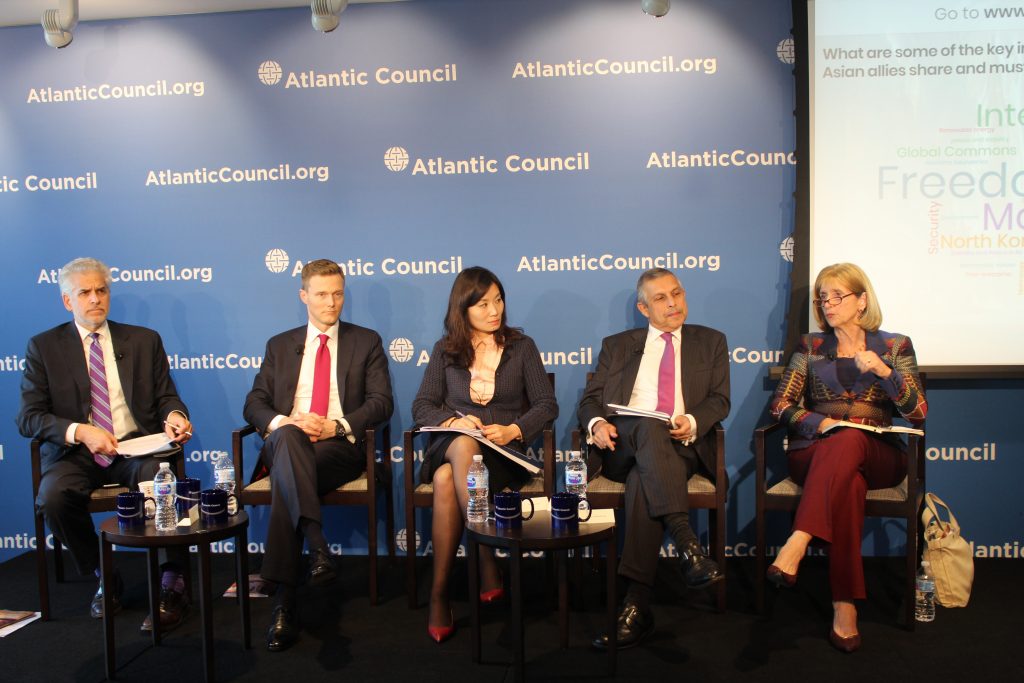 (from left) Barry Pavel, Atlantic Council senior vice president, Arnold Kanter chair, and director of the Brent Scowcroft Center on International Security, moderates a panel discussion with Matthew Kroenig and Miyeon Oh, senior fellows in the Scowcroft Center, Ashok Kumar Mirpuri, Singapore’s ambassador to the United States, and Paula Dobriansky, a senior fellow in Harvard University’s Future of Diplomacy Project, as they lay out a strategy for US engagement in Asia. (Atlantic Council)

The United States should update, revitalize, and defend the rules-based international order while considering “hard-headed” engagement with China, according to the latest in a series of Atlantic Council strategy papers.

This “is not a strategy designed in Washington to be imposed on the region,” said Matthew Kroenig, a nonresident senior fellow in the Atlantic Council’s Brent Scowcroft Center on International Security.

Kroenig, along with Miyeon Oh, a senior fellow in the Scowcroft Center, is the author of A Strategy of the Trans-Pacific Century: Final Report of the Atlantic Council’s Asia-Pacific Strategy Task Force.

The paper outlines a strategy based on five pillars—the United States should strengthen security partnerships with its traditional allies and partners in Asia, practice hard-headed engagement with China, update the economic architecture, develop new partnerships to address emerging issues, and promote good governance, the rule of law, democracy, and human rights.

Kroenig said that while the first two pillars are vital for getting the US strategy in Asia right, it is equally essential to strike the right balance between them. “You need to make the traditional allies feel secure… but you have to do that without making China feel that you are containing it,” he said.

Kroenig and Oh participated in a panel discussion with Ashok Kumar Mirpuri, Singapore’s ambassador to the United States, and Paula Dobriansky, a senior fellow in Harvard University’s Future of Diplomacy Project, at the Atlantic Council in Washington on October 19. Barry Pavel, senior vice president, Arnold Kanter Chair, and director of the Scowcroft Center, moderated the discussion.

The launch of A Strategy of the Trans-Pacific Century comes on the eve of US President Donald J. Trump’s first trip to Asia as president. Trump will travel to Japan, South Korea, China, Vietnam, and the Philippines from November 3-14. While in Asia, he will meet Chinese President Xi Jinping, Japanese Prime Minister Shinzo Abe, Philippine President Rodrigo Duterte, and Vietnamese President Tran Dai Quang.

The paper’s launch also coincides with the weeklong National Congress of China’s Communist Party, currently underway in Beijing. Xi has made no bones about China’s ambition to embrace a larger role on the world stage. Speaking at the national congress on October 18, he said China has entered a “new era” and that it “should take center stage in the world.”

US-China relations have been tested by the North Korean nuclear crisis [China is the main supporter of Kim Jong-un’s regime], the trade imbalance between the two countries, and China’s territorial claims in the South China Sea. China has vowed to protect these claims using military force. Brunei, Malaysia, the Philippines, Taiwan, and Vietnam also assert sovereign rights over the resource-rich sea, which has key maritime routes.

In their paper, Kroenig and Oh paint two possible scenarios for the future. In the first scenario, the US-led rules-based international system has collapsed and China exploits this development by reordering the region to suit its interests. There would, as a result, be less international trade and investment and a rise of authoritarianism. “Unfortunately, there are currently indications that this future is at least plausible,” Kroenig and Oh write.

In the second scenario, the US-led, rules-based international order is intact but updated to reflect changed circumstances and the weight of emerging powers. “The United States and China compete… but they also come to a common understanding on major issues of strategic stability in the Asian security order,” the paper’s authors write. “They avoid outright conflict, and other states in the region are free to enjoy strong economic relations with both powers.”

This second future will only be possible “if the United States continues to think strategically about how best to adjust the international architecture to account for changing political and economic circumstances,” the authors added.

In her remarks, Oh emphasized strengthening the trans-Atlantic-Pacific partnership. “We believe that US allies in Europe and Asia are facing similar challenges… and they will be most effective at reaching a solution if they can bring their combined effort to solve these problems,” she said.

Trump has advocated an America First policy that highlights bilateral engagement at the cost of multilateral deals, and so his decision on the TPP came as no surprise to Mirpuri.

Mirpuri said that in Southeast Asia, free trade agreements are understood in terms of not only their economic value, but also their strategic benefits.

Mirpuri, noting that the world order is changing, said “business as usual is not going to work in this new order.”

Oh said an important question to be asked is: “How can we place America First within the open trading system?”

The US’ Role in Asia

The Singaporean envoy credited Trump and his administration with giving adequate attention to the United States’ Asian allies and partners. Even before he took office, Trump met Japanese Prime Minister Shinzo Abe; he has also met the leaders of South Korea, Vietnam, Malaysia, Thailand. Trump will also meet Singapore’s prime minister, Lee Hsien Loong, on October 23. Senior members of Trump’s cabinet have been similarly engaged with and undertaken trips to Asia.

Oh said a key question on the minds of leaders in Asia is whether the United States will be able to sustain its longstanding role as a security provider in the region while promoting the idea of America First. “The region needs a strong reassurance from the United States,” she added.

Xi, who is expected to be confirmed to a second five-year term at the end of the national congress on October 23, has initiated the Belt and Road Initiative (BRI). This ambitious project involves China spending roughly $150 billion a year on building infrastructure in the sixty-eight countries that have signed up to the BRI.

The United States has, so far, been cool to the idea.

Oh noted that the US Congress has not held a single hearing on the BRI. However, she said, there are now calls coming from within the United States to reconsider this indifference toward a significant initiative. “People are trying to think differently,” she said.

“Countries like Singapore and the rest of Southeast Asia, we operate in the space between US-China relations,” said Mirpuri. “When that space narrows we get squeezed, when that space broadens we have a lot more ability to operate.”

Dobriansky, too, alluded to the importance of China’s relationship with the United States and the region. “In getting it right there has to be a balance,” including addressing head on any challenges in the relationship, she said.

Despite this friction, China, in part due to its dominant presence in the region, is the main trading partner for most Southeast Asian countries. “We have seen a huge amount of benefit in our economic cooperation with the Chinese,” Mirpuri said of Singapore’s economic relationship with China.

Ashish Kumar Sen is the deputy director of communications at the Atlantic Council. Follow him on Twitter @AshishSen.