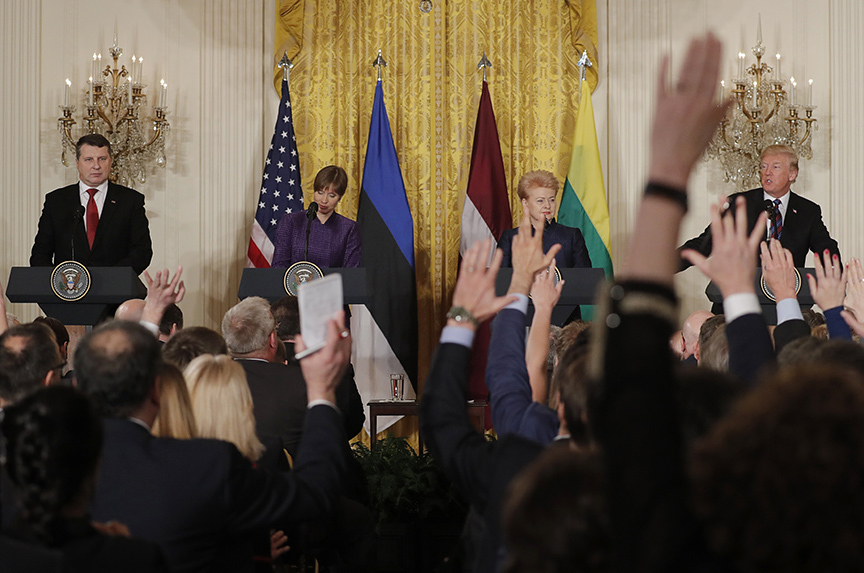 Since regaining independence, the Baltic states have transformed themselves into some of Europe’s most dynamic economies with some of the fastest growth rates in Europe. Baltic societies are highly digitized and connected to the outside world. They are also committed to democratic values of openness, human rights, and rule of law.

Today, these accomplishments face a new test emerging from a Kremlin intent on sowing division and mistrust, undermining our democratic societies, and intimidating our allies.

The Baltic nations have transformed from captive nations to frontline allies. I believe that we are entering a historic window of opportunity in which we have the possibility and perhaps the responsibility to consolidate the US-Baltic partnership and the security of our alliance.

The first window of opportunity

The remarkable achievements of the Baltic states today were not a given.

In the 1990s, a historic window of opportunity opened and the peoples of the Baltic states acted. They regained their independence in 1991 and rebuilt their democracies, their economies, and their institutions overcoming the scars of nearly five decades of Soviet occupation and communism.

Their success at home transformed how we thought about them as part of our own community. As these nations thrived, their own aspirations to join the institutions of the West grew and what was once inconceivable became compelling.

In Prague in 2002, NATO invited the Baltic nations and four other states to join the Alliance. In essence, the Baltic states brought to life the vision of a Europe whole, free and at peace.

Their success transformed what was a vulnerable area of potential insecurity into one of stability. Indeed, their membership in NATO increased predictability on Russia’s Western border. We avoided the emergence of a grey zone. And thank goodness we acted. Imagine if we had not.

There have been bumps in the road, of course, such as the Euro crisis that hit the Baltic republics hard. But through determination, political leadership, and hard choices the Baltic states recuperated much faster than other regions of Europe.

These achievements should stand as a testament to the grit and determination of the Baltic states to achieve something of lasting value for their nations. But it also speaks to the transformative power of NATO and the EU as communities of like-minded nations.

As the Baltic republics continued to work on improving their own societies and integrating into Europe and the transatlantic community, they also joined US efforts to tackle difficult security challenges around the world.

Latvians, Lithuanians, and Estonians have all fought and died alongside American and other allies in Iraq and Afghanistan. They all played a role in the counter-ISIS coalition.

The Baltic states took on leading roles in the efforts under the EU’s Eastern Partnership to help other nations in Europe’s east integrate with Europe.

A revanchist Russia threatens to undermine these accomplishments. We see the challenge emanating from the Kremlin in the buildup of Russian conventional forces across the border, in the return to nuclear saber-rattling, in military exercises like Zapad which simulate an attack across the NATO border, and in Moscow’s disregard of arms control, including the Conventional Armed Forces in Europe (CFE) treaty and the Intermediate-Range Nuclear Forces (INF) treaty.

The Baltic region today is marred by dangerous brinkmanship, as Russian forces taunt US and allied militaries with provocative maneuvers—such as flying within 50 feet of our aircraft, buzzing the USS Donald Cook, consistently violating Baltic air space and sea lanes.

All of us are very focused on the latest Russian provocation. Just last month, a former Russian spy, Sergei Skripal, and his daughter, Yulia, were attacked with the Russian-produced nerve agent Novichok in Salisbury in the United Kingdom.

We hear an eerie echo of the Cold War in the round of tit-for-tat diplomatic expulsions between East and West that followed the poisoning of the Skripals.

Yet we recognize that this attack is not unique. Unfortunately, it is emblematic of a broader pattern of provocative, outrageous acts: the kidnapping of an intelligence official at the border; cyberattacks, the latest in conjunction with the Zapad exercise; the most recent announcement of a new missile tests in the Baltic Sea.

We almost expect outrageous behavior by the Russian Federation. We risk becoming immune to the news of the next provocation. This was a pattern I witnessed in the lead up to the war in Georgia, when we saw repeated outrageous Kremlin-orchestrated actions but failed to grasp where they might lead.

Today, we witness a hot war unfolding in eastern Ukraine. We don’t anticipate those scenarios in Baltic states. But the point is we cannot rule them out with Vladimir Putin in the Kremlin.

We must, therefore, recognize that, today, our Baltic allies are on the frontlines of freedom. They represent the northern stretch of a frontline of freedom extending from the Barents and Baltic Seas in the north to the Black Sea in the south.

Indeed, the United States and our alliance has responded.

NATO has mobilized. Allies are increasing their defense investments. They have deployed as part of NATO’s enhanced forward presence. We have better contingency planning. The Trump administration and Congress have backed and increased funding for the European Deterrence Initiative.

US President Donald J. Trump’s summit with the presidents of the three Baltic states—Kersti Kaljulaid of Estonia, Dalia Grybauskaitė of Lithuania, and Raimonds Vējonis of Latvia—at the White House on April 3 declared our “ironclad commitment to Article 5 of the Washington Treaty.” It provided the kind of political resolve so crucial to our efforts to ensure that no Russian leader or military official considers an assault on our allies as a remotely viable option.

Our decade-long body of work on the Baltic Sea region here at the Atlantic Council leads me to conclude there is more we can do.

We are on the cusp of another window of opportunity. We enjoy this window for action because of several factors:

So, in my view, the answer is not just another round of sanctions or tit-for-tat expulsions of Russian diplomats.

Our response needs to be more comprehensive, part of strategy on how to check Russian aggression.

In the joint statement that followed the US-Baltic summit, the leaders agreed to “explore new ideas and opportunities, including air defense, bilaterally and in NATO, to enhance deterrence across the region.”

To this end, we could take two additional measures:

US military forces should maintain a continuous, if rotational, presence in the Baltic states. This is not about the United States displacing other NATO allies, or removing responsibility from the Baltic states themselves. It’s not even about sending in tanks. But the US flag matters within any NATO deployment.

Second, we recognize that the Baltic states have primary responsibility for their defense and indeed they have stepped up their own commitments. All will reach the 2 percent of GDP spending target in 2018. Among the twenty-eight allies, in terms of defense expenditure as a share of GDP, Estonia ranks fourth, Latvia and Lithuania are eighth and ninth. Estonia has been above 2 percent since 2015, while Latvia and Lithuania have experienced annual increases in the range of 20 to 43 percent since 2015. Even so, by 2020, the three Baltic states will be spending around $2 billion on defense collectively.

The point is that their best response is not commensurate with the challenge we face. This is an issue of their size and scale. Therefore, we need to move beyond the current mindset in which we allocate $2 million in Foreign Military Financing, and $1 million in IMET—training and education—per Baltic nation.

We could use a combination of loans and grants to support larger scale investment in their own defense. Furthermore, we can use this approach to incentive joint planning and procurement among the three nations, as the US Senate has already attempted to do. These funds could be drawn from, or designated within, the generous plus up of the European Deterrence Initiative (EDI)—the bulk of which is spent on US forces in Germany, the Netherlands, Italy rather than the frontlines.

I recognize there are lots of details to address, but my point is these are not decisions of military planners or financial comptrollers alone. These are strategic, political, and even moral decisions.

These are ideas we want our community to consider, to vet, to debate, to dispute, and to advance.

And, of course, our effort is about far more than security and defense.  It’s why the White House summit had such an emphasis on our economic, energy and commercial ties.

The rationale behind the Atlantic Council’s own engagement in the Three Seas Initiative championed by our interim chairman, retired Gen. James L. Jones, Jr., is to ensure our economic and energy engagement is as strong as our political and military engagement.

It’s why our own energy work focuses on energy diversification of sources, supplies and routes.

And we’re proud to play our own part in strengthening civic ties between our populations through our work.

As Ambassador Catherine Bailey put it: “We can’t look back with any regrets in our support of our Baltic Allies.”