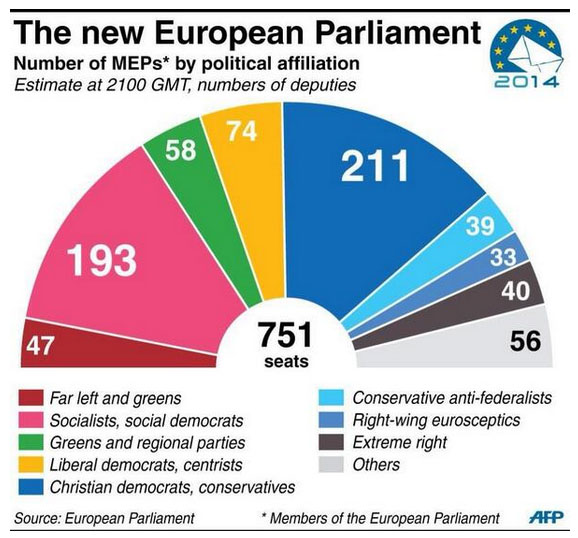 The establishment parties in the European Union are patting themselves on the back, claiming they have reversed the trend toward low participation and that the main parties have retained their dominance of the European Parliament. These facts are true – but barely. For former Luxembourg Prime MinisterJean-Claude Juncker to claim victory when his European Peoples’ Party has gone from 274 to 211 seats is misleading at best and self-delusional at worst.  The big story of this election is the dissatisfaction of voters with the European establishment.

The new European Parliament, more left & green than I would have guessed via @gillyarcht pic.twitter.com/bZkl2BEidD

There are a few bright spots. Italian Prime Minister Matteo Renzi, who has not faced an election since taking over from Enrico Lette in an intra-party coup, has come first with 29-32% — slightly more than Beppe Grillo’s 5-Star Movement, so Renzi will now have an enhanced mandate. Germany saw both an increase in turnout and a reaffirmation of Angela Merkel’s leadership with the CDU taking first. Prime Minister Donald Tusk narrowly beat back Law & Justice by 33 to 32 percent (estimated). And the far-right Geert Wilders Party for Freedom lost seats in the European Parliament, as moderate parties gained.

As for that uptick in voter participation, in 2009, turnout was 43% and initial estimates for 2014 are at 43.9%.  Hardly a clear reversal given that the change is not statistically significant.  And it is clear that even the modest turnout increase was due to voters coming out for the Euroskeptic and anti-establishment parties on the left and right.  In Britain, UKIP seems triumphant with 31.1% (preliminary results), and France’s Front National can claim 25%, in Italy and Denmark much the same.

So  what happens now? Juncker has said he is entitled to become president of the European Commission. But the member states have never agreed with the European Parliament’s argument that the party winning this election is entitled to claim that seat; indeed, British Prime Minister David Cameron has said he will veto Juncker. If Parliament persists in maintaining that the winning presidential candidate should head the Commission, it will only demonstrate how unwilling European political elites are to respond to the public. In theory, the Parliament’s initiative to put forward party candidates for Commission president was a good one, and should have generated transnational campaigns. Instead, all the major candidates were rather uninspiring, with little real differences between them. The voters reacted by voting elsewhere, altogether the three major party groups (EPP, S&D, and ALDE) lost 75 seats. As always in European elections, voters also punished their sitting governments – see France especially — with a few exceptions such as Germany and Italy.

On Tuesday evening, European leaders are due to meet informally to begin negotiations on a package of top jobs: presidents of the Parliament, Commission, and European Council, as well as the High Representative for foreign policy. They should reject the EPP’s claim of victory and show they understand the public’s disenchantment. Europe’s political system needs some new faces, politicians who understand that it is not enough to engage in the rhetoric of integration and union, but who have a track record of delivering for their publics. Moreover, Europe’s next set of presidents must be ready to lead a great debate: to engage the citizens of Europe in an honest discussion about the value of the European Union, including where it should grow and where it should leave the decisions to the member states. This election has made clear the disenchantment of those citizens with the proposed European leadership. It should be a wake-up call for the national leaders when they meet; let’s hope they have heard it.

Fran Burwell is vice president and director of the Transatlantic Relations Program at the Atlantic Council.