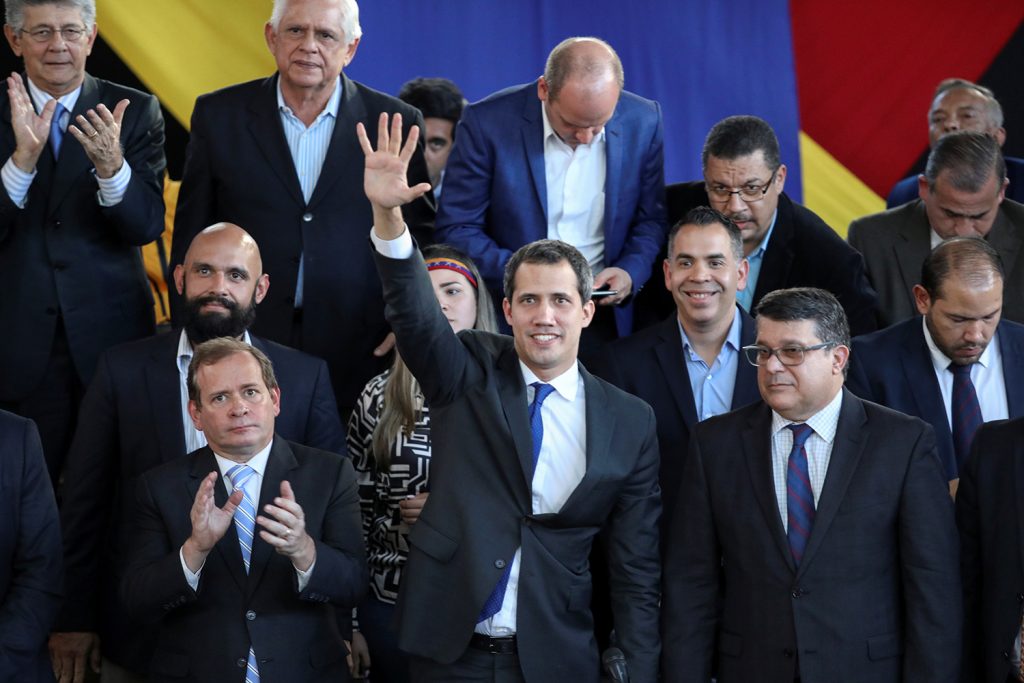 As the interim government of Venezuela continues to fight for freedom and democracy against the regime of Nicolás Maduro, the United States is “unwavering in [its] commitment” to helping Interim President Juan Guaidó and the National Assembly, US Agency for International Development (USAID) Administrator Mark Green said on January 23.

Delivering video remarks to the Atlantic Council, Green praised Guaidó for “his unwavering leadership and courage” in his first year as interim president. Guaidó was elected to the position by members of the National Assembly following the sham inauguration of Nicolás Maduro, who claimed victory in a fraudulent 2018 election. Nearly sixty countries now recognize Guaidó as the legitimate interim president of Venezuela.

The interim president “has served as a beacon of liberty and freedom for those who have suffered so much from Maduro’s brutality, tyranny, and corruption,” Green said. The USAID administrator explained that since the beginning of Guaidó’s leadership, “the United States and USAID have stood in solidarity with the interim government in support of a free, prosperous, and democratic Venezuela. Together with the State Department we have provided more than $654 million in assistance to [not only] people inside Venezuela, but also across the region.” This aid has included the delivery of more than 1.4 million meals, medical supplies for 160,000 people, measles vaccinations for 9 million children, and safe drinking water for 350,000 Venezuelans.

USAID’s efforts have been bolstered by a formal agreement with Guaidó’s government, “the first bilateral assistance agreement between USAID and Venezuela in decades,” Green said. Through this official connection, USAID Assistant Administrator for Latin America and the Caribbean John Barsa explained, “we are able to help the National Assembly do their work representing the Venezuelan people.”

Despite the widespread international support for Guaidó, the democratic forces in Venezuela have been unable to dislodge the Maduro regime, which continues to oversee an economic and societal collapse within Venezuela. As Miguel Pizarro, the special commissioner for humanitarian assistance for the interim government and a representative for Petare in the Venezuelan National Assembly, explained, approximately half of Venezuela’s population has now either fled the country or is reliant on international assistance for basic needs. According to Pizarro, “four out of every ten kids [in Venezuela] are not growing the way they should,” because of lack of food and medicine.

The continued need to help Venezuelans has prompted USAID and the Inter-American Development Bank (IDB) to launch a new initiative—the BetterTogether Challenge—to crowdsource, fund, and scale innovative solutions to the Venezuela crisis. As Barsa explained, “the Venezuelan crisis is so complex and so multifaceted that we can’t come and say do one thing,” so USAID and the IDB “have thrown it open to solutions from anywhere” to help meet the varied challenges of Venezuelans both within the country and living abroad. Irene Arias Hofman, chief executive officer of the IDB Lab, said that the purpose of BetterTogether is to “tap into the innovation [and] the entrepreneurial capacity” of those who care about Venezuela. Interested individuals and organizations can submit proposals to the BetterTogether Challenge and receive financial resources and organizational support for implementation within Venezuela and other neighboring countries.

She also stressed that the BetterTogether Challenge will focus not only on the suffering of those within Venezuela, but also on solutions to help the millions of Venezuelans who have left for neighboring countries. “As Venezuelan migrants and refugees travel,” Atlantic Council Adrienne Arsht Latin America Center Director Jason Marczak said, “they face countless challenges, from finding housing and schooling to increasing xenophobia and discrimination.” Hofman explained that it is important that Venezuelans living in neighboring countries “are seen as having a positive impact in those countries as well,” rather than just a burden.

Hofman reported that the BetterTogether Challenge has already received over 1,000 proposals in just weeks, including a large number from within Venezuela itself. Barsa argued that the involvement of Venezuelans in developing their own solutions is critical as “the best solutions are those created closest to the problem.” Pizarro added that opening the doors for Venezuelans to contribute allows them “not only to survive the situation, [but gives them] the ability to dream, to propose, and actually at the end of the process to deliver some sort of assistance for the country.”

At the one-year anniversary of the Guaidó government, Marczak argued it is “an important moment to show our support for the democratic will of the Guaidó interim government and the fight for Venezuelan freedom.” Green said the United States continues to “recognize the bravery of Juan Guaidó, the National Assembly, and all those who are fighting for democracy and freedom in Venezuela.” As these forces for democracy continue to fight the control of the Maduro regime, the United States and the global community continues to stand ready to help alleviate the suffering and to rebuild a new prosperous and democratic Venezuela.

Image: Venezuela's National Assembly President and opposition leader Juan Guaido, who many nations have recognised as the country's rightful interim ruler, waves as he arrives to hold a news conference in Caracas, Venezuela January 7, 2020. REUTERS/Fausto Torrealba