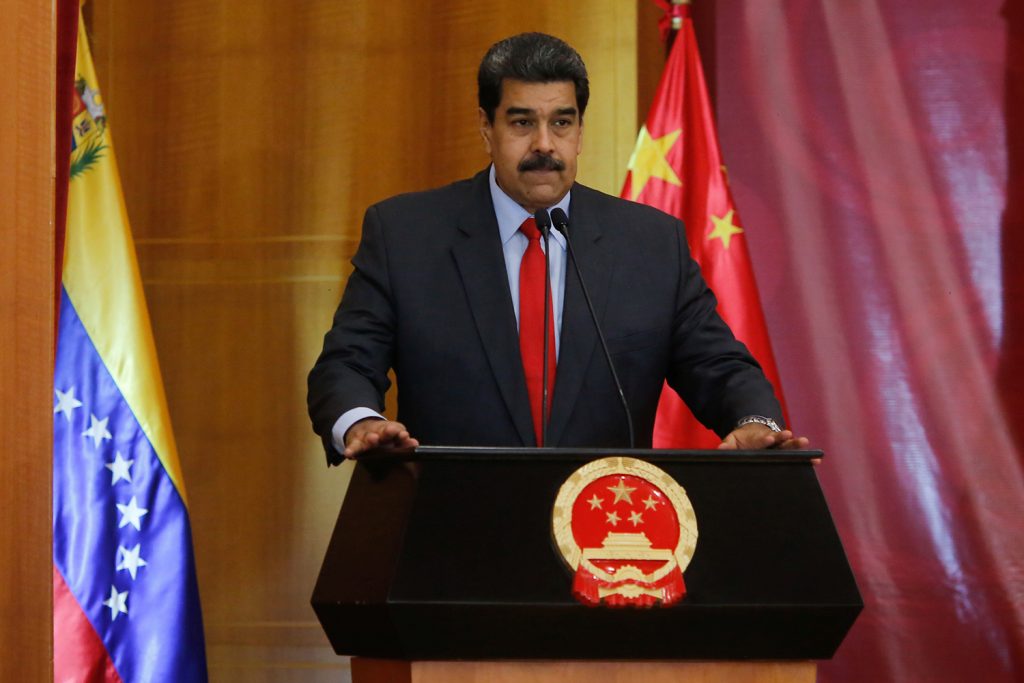 As a result of corruption, poor governance, and misguided policies, Venezuela—once the wealthiest nation in Latin America—has become the Western Hemisphere’s largest man-made crisis in recent history. In 2020, per an Organization of American States report, the number of Venezuelan migrants and refugees is set to surpass total Syrian migration numbers by more than three million, further threatening regional and global stability.

In light of these dire statistics, foreign actors continue to benefit from and exacerbate the South American country’s collapse. A powerful ally, China has continued to provide the Nicolas Maduro regime with economic and political support. It continues to recognize the legitimacy of his regime, and in October 2019 helped Venezuela win a seat on the United Nations Human Rights Council. With roughly $67 billion invested since 2007, China has become a main source of Venezuela’s external financing, and an important partner of its oil-based economy. But what is the extent of China’s support of Maduro? Has this support waned recently? More importantly, what might prompt China to change its position?

To properly comprehend China’s approach to the Venezuelan crisis, including its role in Venezuela’s oil industry, an understanding of the countries’ bilateral relationship is necessary. Before Hugo Chávez came to power in 1999, only one Venezuelan president—Luis Herrera Campins—had visited the People’s Republic of China (PRC). As a result, by that year, trade with China had peaked to just under $200 million.

When Chávez became president, he sought to distance Venezuela from the United States, diversify its oil trade towards partners in Asia, and searched for an ally to counter US power. At the time, China’s engagement with Latin America was growing in several key areas, including diplomatic and military relations, and more prominently, raw-materials based trade. With the world’s largest proven oil reserves, Venezuela made the ideal trade and investment partner for Beijing. By 2002, the two countries had established a strategic development partnership characterized by a series of multi-billion-dollar loans-for-oil deals. Throughout his presidency, Chávez visited China more than any other Latin American leader.

From 2007 to 2017, Beijing provided more than $60 billion in financing to Venezuela, representing more than 40 percent of total Chinese lending in Latin America. China signed multiple contracts with Venezuela for development projects, including mining research and exploration, housing projects, communication satellites, and a railway company.

In 2018, Nicolás Maduro traveled to the PRC to sign twenty-eight bilateral agreements with China and expressed public support for China’s Belt and Road Initiative. Additionally, China has provided the Maduro regime with technological assistance for surveillance and social control through the homeland card (“carnet de la patria” in Spanish). The homeland card, inspired by China’s national identity card program, is used by the Venezuelan regime to provide food and medicine to citizens, as well as to track voting and social media use.

Since Maduro’s rise to power in 2013, however, the PRC has not offered additional lines of credit to Venezuela, choosing to only renew some of the preexisting ones. Maduro’s rampant corruption and mismanagement has led to the region’s worst economic depression, creating unfavorable investment conditions, affecting oil production and exports, and limiting return on Chinese investment and Venezuela’s ability to repay Chinese loans. Experts estimate that of the $60 billion that China lent to Venezuela, around $20 billion remains outstanding. Furthermore, recent US secondary sanctions on individuals and companies doing business with Petróleos de Venezuela, S.A. (PDVSA), Venezuela’s state-owned oil company, have led Chinese oil companies to cease direct purchases of Venezuelan oil.

Most recently, China remained noticeably silent after the January 5 elections in the National Assembly, when the Maduro regime attempted to block a legitimate vote for the National Assembly president. Russia was the only country to recognize regime-backed candidate Luis Parra. Certainly, Beijing’s support for Caracas has diminished over the years, and, relative to its global foreign policy agenda, Venezuela is not a key priority for China.

Chinese President Xi Jinping’s support for Maduro reflects Beijing’s fear that a violation of sovereignty in Venezuela will lead to the international community’s meddling with Chinese internal affairs, specifically in relation to Taiwan and Hong Kong. Indeed, China’s long-standing noninterference approach to foreign policy is the driving force behind its reluctance to join public calls for political change in Venezuela. Furthermore, as long as China perceives US presence in the Asia Pacific region—including military bases in Guam, Japan, and South Korea, and political support for Taiwan and Hong Kong—as a threat, it has no incentives of siding with the US-backed opposition leader Juan Guaidó.

Nevertheless, as Venezuela’s biggest creditor, China is carrying the burden of Venezuela’s economic collapse. The PRC has become increasingly aware of this unsustainable situation, and, behind closed doors, has been in communications with the interim government. Back in February, Chinese Foreign Ministry spokesman Geng Shuang said that “no matter how the situation evolves, China-Venezuela cooperation should not be undermined,” suggesting that China is open to working with a different government to ensure payment for the loans-for-oil deals. Strictly speaking, China’s relationship with the South American country is transactional, not ideological.

The United States and the rest of the international community has and should continue to engage China to accelerate a democratic transition in Venezuela. For now, the standstill appears to be in China’s best interests. It does not see the Maduro regime falling or the military changing allegiance. To change this perception, it is critical to convince China of the following:

Venezuela today is a liability

Given the Trump administration’s strong support for a democratic transition in Venezuela, Chinese support for the Maduro regime could severely strain US-China relations. The stakes are especially high now that there is a partial US-China trade deal on the table after a long and arduous negotiation process.

A regime change is inevitable and necessary for full debt repayment

Venezuela’s oil production may very well continue to decline until Maduro is out of office. With the interim government preparing post-transition reconstruction plans, Guaidó has emphasized his willingness to respect all agreements that have been signed with China.

Venezuela is a reputational risk

Venezuela is a regional issue and a reputational risk that affects China’ relationship with and image in the rest of the region: Latin American countries that have developed tight relationships with Beijing must leverage their position to push China away from the Maduro regime and towards a policy of engagement that promotes peace and stability in Venezuela. Furthermore, regional destabilizing effects of the Maduro regime may very well affect Chinese commercial and geopolitical interests in Latin America, especially as China aims to promote economic prosperity in the region through ambitious efforts such as the Belt and Road Initiative.

“We are receiving Venezuelans with a sense of solidarity.”