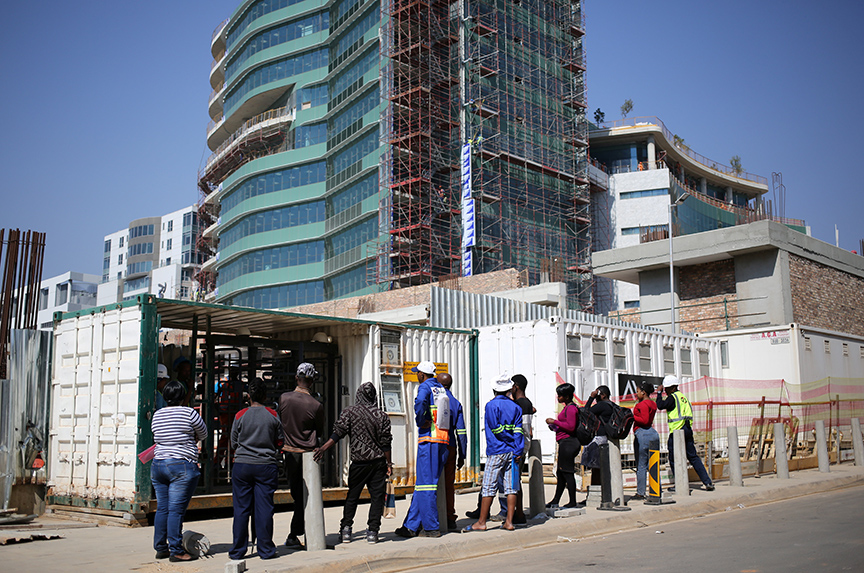 Job seekers stand outside a construction site in Sandton, an affluent area situated within the metro of Johannesburg, South Africa, on September 8. (Reuters/Siphiwe Sibeko)

Africa’s rising levels of unemployment, which threaten further instability on a continent already susceptible to unrest and violent extremism, must be addressed by building capacity within the sectors of government able to instigate positive change, according to an Atlantic Council analyst.

“The jobs issue has really concerned most companies, policy makers, stakeholders across the board because we know that without jobs you have a greater potential for unease, unrest, instability,” said Aubrey Hruby, a nonresident senior fellow with the Atlantic Council’s Africa Center.

“The scale at which we need to create jobs in Africa is unprecedented,” she added.

Hruby joined Adva Saldinger, associate editor at Devex, for a Facebook Live discussion on November 7 to analyze the growing jobs gap in Africa and what steps may be taken to remedy the situation. Their conversation came on the heels of an Atlantic Council event, in partnership with the Tony Blair Institute for Global Change, on the same topic.

The event also launched a report from the Tony Blair Institute which notes that by 2040, 50 million people in Africa will be unemployed. “Certainly, this issue of a quickly growing, very young population and job growth that isn’t anywhere near keeping up with the demand is a real challenge facing the continent that also has global implications,” said Saldinger.

It is an issue “that has spillover effects,” Hruby added.

“There is some kind of disconnect between [Africa and] the global market,” said Hruby. In order to remedy that disconnect and begin to fill the jobs gap, she called for a “modern industrial strategy.”

In the event, Jonathan Said, head of the Tony Blair Institute’s Inclusive Growth and Private Sector Development practice, claimed this strategy is “about facing the global economy, embracing it, and finding what you’re good at.”

In the Facebook Live discussion, Hruby echoed Said’s prescription, adding that African nations need to find their own competitive advantage, whether that lies in manufacturing or a particular natural resource, and “promote the thing that is going to bring export success.” However, she said, the continent’s diversity means that “different countries will have to have different strategies.”

Ultimately, according to Hruby, “no policy is sufficient by itself; it has to be implemented.”

Said called for international partners to “help governments get coordinated and take the lead” in their national solutions to unemployment. Hruby added that the private sector must play a significant role as well, calling for businesses “to create an alternative balance against governance that pushes and pulls governments to the right type of reforms.”

Ultimately, she said, the private sector is where jobs are created, but governments provide infrastructure and the rules of the game.

However, the issues of corruption and ineffective governance in Africa pose a significant challenge to job creation and effective economic reform. Hruby warned that while this may hinder growth, the magnitude of the job creation challenge means “we can’t just wait for governance to catch up.” Work must begin now to remedy the issue, she said, rather than waiting until the political and economic environment is more suitable.

“I think we have to work on creating jobs despite bad governance… and hope that it improves,” said Hruby.