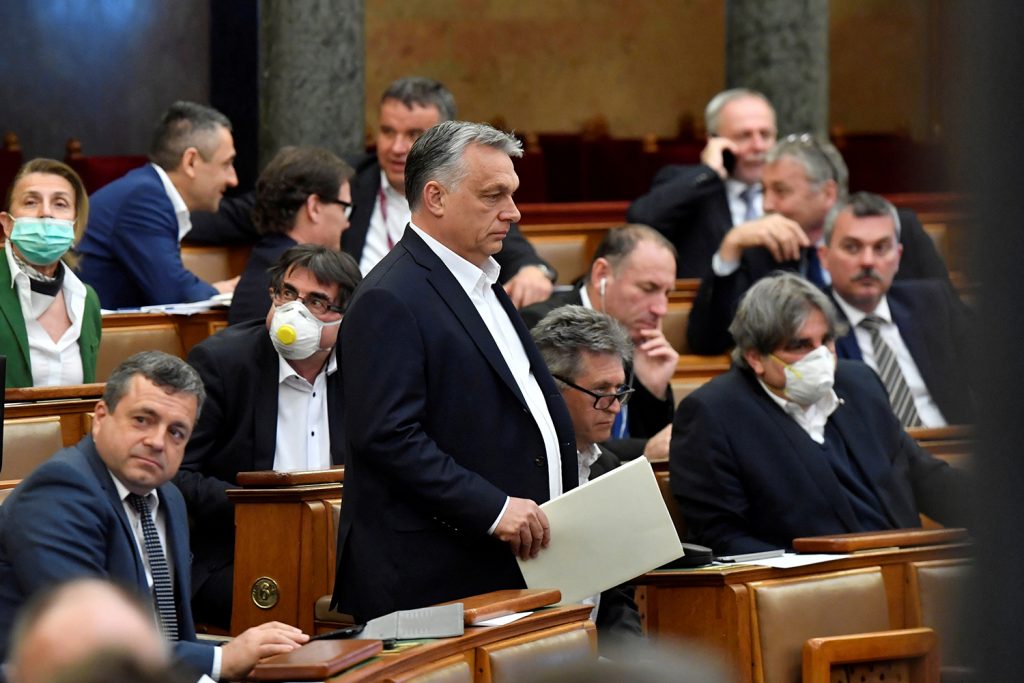 On March 30, Hungary’s parliament voted to grant the government of Prime Minister Viktor Orban broad powers to address the coronavirus emergency. Critics in and out of Hungary immediately charged the government with using the coronavirus as a pretext to advance an authoritarian agenda consistent with Orban’s advocacy of nationalist “illiberal democracy.” Some of the criticism came from long-standing critics of Orban. But some came from top European leaders closer to Orban. European Union Commission President Ursula von der Leyen (who owes her current position in part to votes from Hungarian delegates to the European Parliament) said the law goes too far and needs to be limited in time and subject to “regular scrutiny.” Orban’s once-friend, former Polish prime minister, and former EU Council President Donald Tusk, who now heads the European center-right political group to which Orban’s FIDESZ party belongs, cautioned that his political group could expel FIDESZ.

A host of analysts, including Andras Simonyi, former Hungarian democracy activist and later Hungarian ambassador to Washington, have laid out problems with the law, including its lack of a sunset clause and excessive delegation of power to limit key freedoms (e.g., of the press). The law’s defenders have asserted that many of its provisions have counterparts in other European countries and dismissed criticism as motivated by partisan politics.

It is possible to argue that Hungary’s “Protecting Against the Coronavirus” law may not turn out as bad as critics claim. But the potential for abuse seems clear. Orban’s record of putting pressure on independent institutions and habit of dismissing cautionary suggestions even from long-standing friends as motivated by bad intent, make it harder for Hungarian authorities to ask others to “trust us.”

EU institutions are not designed to put pressure on errant member states. Article 7 of the Treaty of Lisbon allows the EU to suspend voting and other rights if a member state is found in breach of core EU values, but it requires all other EU members states to agree, and Poland is likely to block consensus on invoking Article 7 against Hungary. EU funds flowing to Hungary are another source of potential leverage, but the EU budgetary process is complicated, not ideally suited to short-term steering for such a purpose.

The United States has also struggled to find an effective policy with Hungary. During the Obama administration, the State Department took a hard-edge approach, which included plenty of public criticism, downgraded bilateral contacts, and even economic sanctions against officials it deemed corrupt. That didn’t seem to work and it led to anomalies such as Secretary of State John Kerry meeting frequently with his Russian counterpart while even assistant secretary-level meetings with Hungary were limited.

The Trump administration tried a combination of reengagement and private encouragement, led by then-Assistant Secretary for European Affairs Wess Mitchell, who offered Orban an opportunity to pull back from his harder-edge positions without public pressure. That also didn’t seem to moderate Orban’s direction. (Part of the problem may have been that while Mitchell and the National Security Council staff were trying a honey-rather-than-vinegar effort to convince Orban to go in a less confrontational direction, more ideological elements of Trump’s administration actually liked Orban’s hard-right approach and undercut their own administration.)

The lack of quick or easy options does not mean that none exist, however.

Here are some suggestions (offered with confidence that nothing will come easy). First, the don’ts:

A longer-term US strategy should be dual track. That means advancing a cooperative official agenda, e.g., energy security and other infrastructure support, as in the Three Seas Initiative which is also supported by the Trump administration. It should also mean, when the United States and EU have their act together, common approaches to recovery from coronavirus and the accompanying economic shock.

At the same time, the United States—both the government and civil society groups—should speak clearly (and credibly) about problems it sees, neither exaggerating nor excusing. As it does, it should advance sustained outreach to (and support for) independent Hungarian society, both in Budapest (which elected a mayor from the Hungarian liberal opposition) and, more importantly, beyond Budapest. The Hungarian government may not like it: they made George Soros’ Open Society Foundation, which had once helped Orban himself, a punching bag and have made it difficult for other organizations to operate. But there are many ways to reach out to Hungarian society and many European and US organizations capable of doing so. Working with Hungarian society and working with the government are not mutually exclusive.

The EU’s relations with its member state Hungary can also follow a dual-track approach. Hungary will be part of the EU machinery (benefiting from still substantial EU support). But Von der Leyen’s call for “regular scrutiny” of the new coronavirus emergency law should be made real, with regular reports of the law’s implementation prepared and made public. Should the law be abused, the EU could react through political (rather than formal treaty) mechanisms, where it has discretion, such as expulsion from the center-right European People’s Party as Tusk warned was possible.

The EU’s leaders are to be applauded for their measured but principled statements about the emergency law; they should follow them up with commensurate steps. The United States has had trouble maintaining a consistent line about Hungary, but US civil society can help fill the gap. A new US administration may look at Orban’s government with more skepticism than the current one, given the Orban government’s partisan support for the Trump presidency, but should develop the same constructive paths of dual-track engagement that we advocate above. Lashing out at Orban, or otherwise making Hungary an object of partisan politics in the United States, will only suggest to Hungarians that Orban and his government were right about critics’ political motivations and push Hungary further in a bad direction.

Hungarian history will be made by Hungarians, but Hungary’s friends can help shape the context in which they do. Along with patience, we should stay true to our best traditions in the process.

While he stems the spread of the coronavirus, Orban is spreading the virus of illiberalism.

Viktor Orban had the opportunity in the last weeks to choose between becoming a statesman or a general. He opted for the latter. One wishes him well in dealing with the crisis. But this last decision is not really about handling the crisis.

Image: Hungarian Prime Minister Viktor Orban arrives to attend the plenary session of the Parliament ahead of a vote to grant the government special powers to combat the coronavirus disease (COVID-19) crisis in Budapest, Hungary, March 30, 2020. MTI Zoltan Mathe/Pool via REUTERS/File Photo