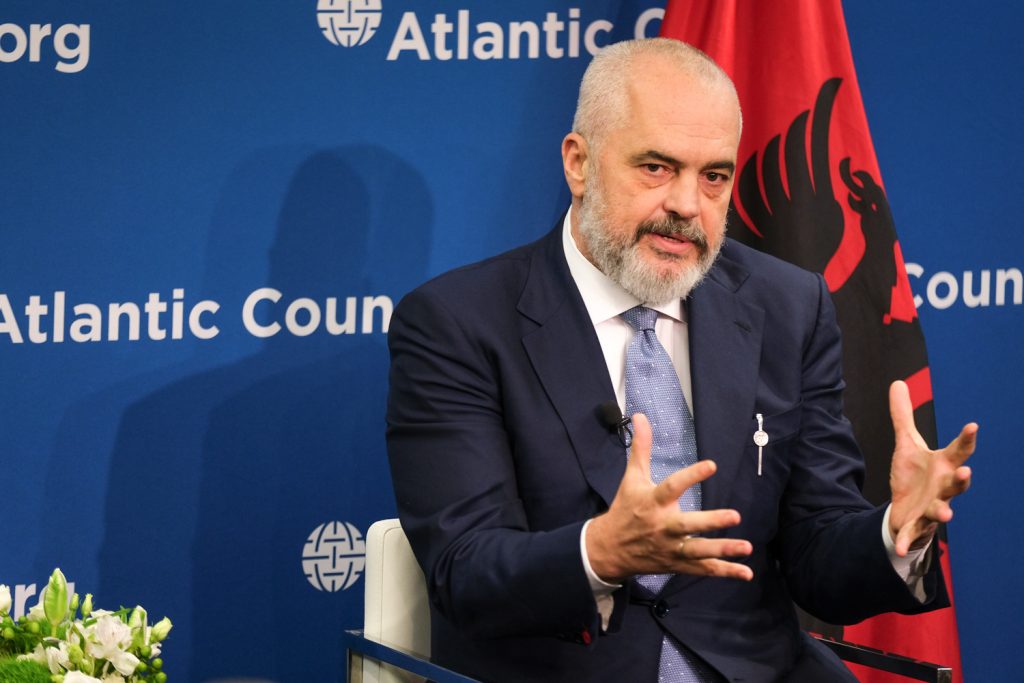 In October, EU leaders failed to agree on the opening of accession negotiations with Albania and North Macedonia after French President Emmanuel Macron expressed concerns about the EU’s enlargement process as a whole. Macron then released a new plan for enlargement reform in November, which would transform the accession process into a series of policy stages, as well as introduce an element of reversibility should candidate countries fail to implement needed reforms quickly enough. Shortly before Rama spoke to the Atlantic Council, the European Commission on February 5 announced a new proposal for the EU enlargement process, which includes deeper monitoring of candidate country progress by member state governments, new thematic clusters for negotiations, and more predictable conditions for candidate countries to meet in order to achieve membership.

Frederick Kempe, president and CEO of the Atlantic Council, called the Commission’s proposal “a welcome demonstration of the EU’s commitment to the Western Balkans as part of the Euro-Atlantic family.” Rama also welcomed the new proposals and said that he believes Macron has “some very good points” about the flaws of the enlargement process, even if the Albanian prime minister disagrees with the blocking of Albania’s accession progress. “Even though [Albania] may have had it easier,” without this reform push, Rama said, “it is very good to have a discussion on improving the methodology [for enlargement] and making it fairer and more predictable for everyone.”

Rama argued, however, that Albania and North Macedonia were being unfairly held hostage over what amounts to a disagreement between EU member states themselves. “We did everything that a country like us had to do to open accession talks,” he explained, adding that “the process [has become] more and more demanding” and has “started to [become] hostage to political agendas and inner dynamics in different countries.”

The stated concerns by some European politicians that Albania and North Macedonia still have considerable problems with crime and corruption should not factor into the specific decision on accession negotiations, Rama argued, because this is the start of the process, not the end. If Albania was perfect from the standpoint of the European Union “we would have asked to join today,” the Albanian prime minister said. He also stressed that Albania “needs accession talks” to make the exact reforms that many European leaders want him to achieve. The incentive of European membership is an important domestic political driver to overcome opposition to reforms, he explained, but the accession process also provides “the know-how base” needed “to build all the mechanisms of a functioning member state.” Although membership is the major goal for his country, Rama explained that “the journey is much more beneficial to the country than the date of arrival.”

Although Rama welcomed the Commission’s new enlargement proposal, he said he was unwilling to try to predict when a positive decision on opening accession negotiations would be reached. “It is not one person or one organization,” he explained, “it is twenty-seven heads of states that have twenty-seven types of elections and types of problems.” Despite the uncertainty of when negotiations will start, he promised that Albania will continue “to do our work same as we would do if accession talks are opening.”

In addition to preparing Albania for eventual EU accession, Rama has also placed an emphasis on working with other leaders in the Western Balkans to enhance the region’s interconnectivity. Rama signed an agreement with Serbian President Aleksander Vucic and Prime Minister of North Macedonia Zoran Zaev in October that aims to create a “mini-Schengen” area between the three countries that would eventually allow the free movement of people, goods, capital, and services across borders. When asked by Atlantic Council Executive Vice President Damon Wilson whether this effort should be seen as an attempt to find an alternative to the EU, Rama explained that it would serve as a useful training ground for the Western Balkans to prove that they can “implement the four freedoms of the EU in our region.”

The participation of Serbia in this project has also raised hope of greater cooperation between Albania and Serbia as Belgrade continues to move closer towards normalizing relations with Kosovo. Rama said that he believes “we need to find out what and where we can work together” with Serbia, despite their political differences over the recognition of Kosovo as an independent state. “We don’t agree [on Kosovo], but that is not a reason to freeze everything,” he said.

The proposed agreement on borders includes important flexibility, Rama explained, that would allow other Western Balkan countries to participate in what ways and with whatever countries it desires to, opening the way for the Kosovo-Albanian border “to become totally fluid,” a key priority for Rama. On February 4, Kosovo’s parliament elected a new government, making Albin Kurti the new prime minister. Although Kurti’s political party has sometimes advocated for the unification of Kosovo with Albania, Rama poured cold water on this possibility, saying “the poetry of opposition is not the prose of government.”

The relationship with Washington

The fact that the Western Balkans is even able to consider such extensive cooperation is a direct result of the support its countries have received from the United States, according to Rama. “Today we know that the Western Balkans are a better place thanks first and foremost to the United States and its allies,” he said. Wilson explained that despite the fact that “politics in Albania are as divisive as you might see politics in Washington right now…the one thing that all Albanians agree dramatically on is the alliance with the United States.” Albanians will never forget the assistance the United States and its allies have made to transform the region from “an area of hostilities and long chapters of conflict and bloodshed into an area of peace and cooperation,” Rama said.

The key now, according to Kempe, is for Europe and the United States to maintain that support as the region looks to solidify this stability and unleash a new era of prosperity. “The next few months and years will be complicated for the region, but they will also be full of opportunities,” Kempe explained. “This is a time for nimble and creative thinking.” Thankfully, Kempe added, these are traits that Rama “has in great surplus.”