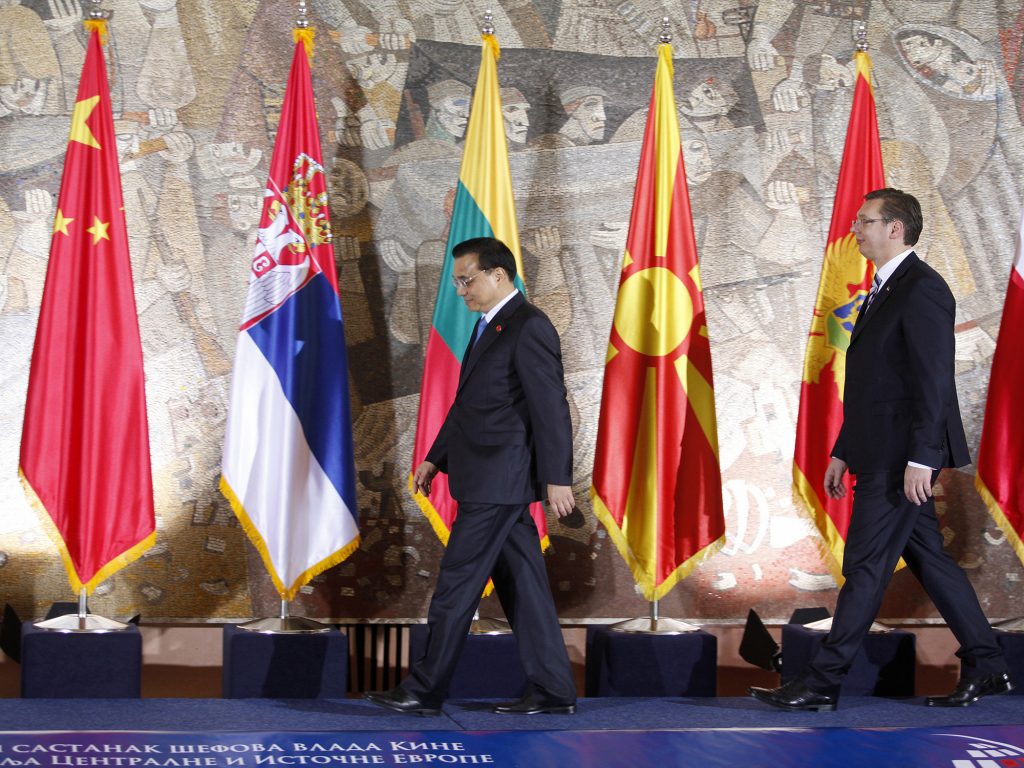 The US National Defense Strategy articulates today’s era of great power competition clearly. That competition is playing out in the Western Balkans. In response, the United States should extend our alliances and attract new partners in this region as a key component of our strategy to protect our interests and compete effectively.

Yet, in the past decade, the United States and the European Union (EU) became more ambivalent about our commitments in the Western Balkans. Moscow and Beijing, sensing an opening, have become more determined in their efforts to gain influence and leverage in the region.

Russia seeks to disrupt reforms and enlargement in Southeast Europe, complicating in turn the aspirations of nations further in Europe’s East to chart their own course and pursue EU or NATO membership.

China’s approach is more subtle, but its ambitions may be more significant:  to enter Europe through a region it views as the continent’s soft underbelly in order to prevent Europe from siding with the United States in any emerging global confrontation.

US policy in the region today should be informed by how our strategy has evolved.

In the summer of 2001, the United States set the tone for our approach to enlargement when President George W. Bush declared in Warsaw: “We should not calculate how little we can get away with, but how much we can do to advance the cause of freedom.” Two years later, EU leaders declared in Thessaloniki, Greece that, “the future of the Balkans is within the European Union.”

These bold statements provided a North Star for a region still reeling from the wars of the 1990s. Corruption remained endemic, rule of law fragile, and democratic institutions weak, but there was a sense of inevitable progress. The West’s clarity served as incentive for reform.

Indeed, less than a year after the Thessaloniki declaration, Slovenia joined both NATO and the EU. In 2009, Croatia and Albania joined NATO. It took another four years for Croatia to join the EU. In 2015, Montenegro joined NATO. And now, the US Senate is poised to welcome North Macedonia as our next ally.

Despite this progress, the transatlantic community’s conviction in enlargement has waned, commensurate with increased doubts within our own societies about our institutions. As leaders are grappling with divisions within NATO and differing visions for the future of the EU, they are skeptical about further enlargement.

This ambivalence has provided an opening.

Russia and China seize the momentum

A revanchist Kremlin has acted to halt the democratic advance, to undermine our post-Cold War gains, and to sow mistrust within our societies. Russia began pursuing a strategy less focused on maintaining its limited influence in the region, and more about disrupting our influence – by disrupting the process of NATO and EU integration. Whereas the integration process is designed to counter corruption, bolster rule of law, and build national capabilities, Russia found leverage in exploiting corruption and weak institutions. While Moscow’s strategy is effectively limited to one of disruption, we have seen in places such as Ukraine and Georgia that, when Moscow senses success, its ambitions grow.

Russia has used its energy prowess, deployed its intelligence services, waged disinformation campaigns, and manipulated the Orthodox Church to gain leverage over the region. In Serbia, Moscow has coupled these coercive tools with its position on the UN Security Council and its exaggerated historic ties to exert influence.

More recently, China has emerged as a serious actor in the region. It is now among the top five markets for imports into most of the countries in the region, while Russia enjoys that status only in Serbia.

China understood its arrival in the region would face little resistance from small states hungry for investment, and that a foothold would provide a bridgehead into Europe. China has extended its Belt and Road Initiative, secured trade routes and market share, and diluted European solidarity on issues important to Beijing such as human rights and Taiwan. Ultimately, the Chinese government likely aims to prevent Europe from joining the United States in any effort to check China’s global influence.

The return of Russian influence and the arrival of Chinese influence – against the backdrop of great power competition between a free world and autocratic, kleptocratic powers – has meant the Balkans is back in play.

To be fair, we should not overestimate the challenge. Russia after all produces little of what the region imports, outside of energy. Moscow is notorious for failing to follow through on loans and investments. And the Kremlin’s heavy-handed tactics in the region have created a backlash. While Russian disinformation remains potent, leaders in the region do not trust Russia’s intentions.

US and now EU warnings of undue Chinese influence are beginning to be heard in the region. But while skepticism of Russia has grown, open attitudes toward China remain.

How the United States can respond

The United States, partnering with the EU, has good options for advancing our own interests in a secure, democratic, and prosperous Southeast Europe.

First, we should be explicit that the National Defense Strategy’s call for strengthening alliances and attracting new partners applies in the Western Balkans. Following through on this would bolster our comparative advantage over near-peer competitors. To this end, the United States and the EU should return to first principles, articulating a vision of a Europe whole, free, and at peace that includes all of Southeast Europe. US policy should be clear that as nations in the region reform and are able to meet relevant responsibilities, they will be welcomed into the transatlantic community and, if they desire, into its institutions.

As part of this effort, we need to compete for influence. This means reaching out directly to publics and engaging at senior political levels throughout the region, including with those with whom we sometimes disagree. We do not want our disregard of local public perceptions or isolation of certain leaders to leave them with few options other than Moscow or Beijing.

Second, our immediate task should be to secure the gains offered by the Prespa Agreement between Athens and Skopje. This means the US Senate and other allied parliaments should welcome North Macedonia as NATO’s 30th member as soon as possible. We should also encourage our European friends to follow through and open EU accession negotiations in October.

Third, and perhaps most important, is achieving a comprehensive, historic settlement between Kosovo and Serbia. Such an agreement would include normalization and mutual recognition, paving the way for Serbia to advance its EU aspirations and allowing Kosovo to join the United Nations and develop as a sovereign nation. Progress in the Belgrade-Pristina dialogue is the game-changer in the region.

Without an agreement, Russia has leverage over Serbia and therefore the region. The absence of a deal fuels nationalist political debates, delaying the development of democracy in Serbia and allowing Kosovo’s leaders to avoid tough governance questions. In contrast, a deal would allow leaders to focus on how better to unlock the potential of their citizens. Furthermore, a Serbia moving more decisively toward Europe will provide the guardrail we need for Bosnia-Herzegovina.

Prospects are not great. Kosovo is in the midst of elections that could produce a government skeptical of a deal. Nonetheless, a window of opportunity will open from this fall until next summer, prior to Serbian parliamentary elections. With EU senior leadership positions changing this fall, US leadership is critical to ensure progress. I therefore welcome the appointment of a seasoned diplomat, Matt Palmer, as US Special Representative for the Western Balkans.

To convince both sides to return to the negotiations, US and EU diplomacy should advance reciprocal steps to achieve a status quo ante:  Kosovo would lift its 100 percent tariffs while Belgrade would cease its derecognition campaign during the negotiations.

An often-discussed significant land swap is not viable, even if there will need to be a modest border demarcation. However, the United States and EU should promote economic integration as a means to minimize the relevance of borders in the region. We should aim to agree a free trade area among Western Balkans states long before the EU common market arrives.

Furthermore, the EU should be prepared to invest billions into supporting a comprehensive agreement, and I would suggest that the US Congress should consider committing several hundred million dollars to bolster such an historic deal.

Fourth, the EU and United States should partner with nations in the region to develop regional interconnections in transportation, telecommunications, and energy. This means creating the infrastructure of Europe in the region well before EU membership becomes viable. We should seek synergies between the Three Seas Initiative and the Berlin Process to accelerate this goal. We should help our partners pursue smart economic development, including with Chinese financing, without sacrificing their national security.

Finally, to secure these gains for the future and to hedge against Russian efforts to disrupt our interests or Chinese interests to displace them, the United States and our NATO allies should maintain a permanent security presence in the region, based in Kosovo, coupled with growing security cooperation with Serbia. Our presence should be part of our broader deterrent force posture throughout Europe. It should also serve as a catalyst for regional capacity-building, forging confidence among the militaries of the region in each other.

Ultimately, US support for historic reconciliation in Europe, following the end of the Second World War and then the Cold War, in which former adversaries became allies, is the right long-term blueprint for security and democratic and economic development in the Western Balkans.

In an era of great power competition, the United States should bolster and expand its alliances as a strategic comparative advantage over our adversaries. In the Western Balkans, a little effort can reap outsized dividends.

The price of compromising was high — many citizens remain opposed to it — but the cost of not doing so, the government concluded, would have been infinitely higher. Radmila Šekerinska, the defense minister of North Macedonia, is unapologetic about that decision.

The region has been increasingly targeted by foreign-backed and homegrown disinformation in recent years, made worse by deep public mistrust of governmental institutions.

How to push back against Kremlin’s malign influence

The United States needs to do more to push back against Russia’s attempts to disrupt democratic societies around the world, Michael Carpenter, a senior fellow in the Atlantic Council’s Eurasia Center, told US lawmakers on May 21.