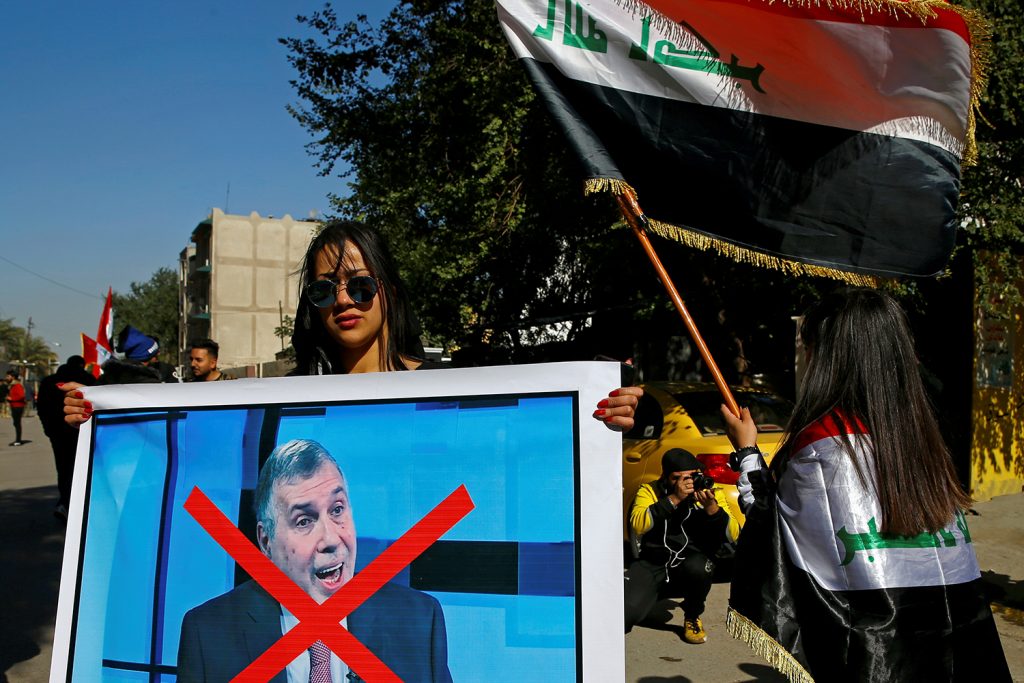 Mohammed Tawfiq Allawi’s decision to withdraw his nomination on March 1 as Iraq’s prime minister illustrates both the extreme dysfunction of Iraqi politics as well as the opportunities to reform it. Taking advantage of those opportunities, however, will require constitutional reforms that nearly everyone agrees need to happen, although there is no consensus on the best way to do this. Despite the political cover the current protests give for such reforms, achieving them will be an uphill battle, as Iran will continue to use its considerable influence to try to maintain the status quo, which facilitates its goals of pushing the United States out of Iraq and ensuring Iraq remains a weak and compliant neighbor.

While Iran was successful at controlling the nomination process, it was less able to contain and stamp out the protests. The Iran-backed Fatah bloc, the largest in Parliament, proposed Basra governor Asaad al-Eidani as the next prime minister, but protestors immediately rejected him. In deference to the protestors, President Barham Salih refused to designate Eidani as the nominee, offering to resign if necessary. Despite protests by members of parliament at Salih’s move, Eidani’s nomination did not move forward. Score one for the protestors.

Thus, Allawi became the “compromise” candidate. Salih proposed him and Iran endorsed him.  Influential Shia Cleric Muqtada al-Sadr accepted Allawi’s nomination and even called on his (Sadr’s) followers to cease their participation in the protests. Unfortunately, Allawi’s ties to Iran and the Iraqi political class given his status as a former minister meant the compromise did not go far enough. His nomination was also immediately rejected by protestors.

But this time, that rejection did not stop the nomination from proceeding. What did stop his nomination was Parliament’s failure to endorse his proposed cabinet, which, in what seemed to be an effort to account for at least some of the protestors’ demands, was made up of independents and technocrats. Whatever their qualifications actually were, the problem was that the proposed cabinet members did not adequately accommodate various party interests. Thus, Allawi could not get the votes he needed for his nomination to proceed. Rather than giving into those interests, Allawi did the right thing and withdrew his nomination.

Of course, this outcome is just fine for Iran, which exploits Iraq’s corruption, poor security, and sectarian politics to extend and solidify its influence. While the protests have challenged that influence, what Tehran really fears is a transparent, effective Iraqi government that cannot only provide public services, but which is resilient to Tehran’s efforts to dominate Iraq’s political process.

Tehran’s desired outcome, of course, is not acceptable for the protestors. Nor should it be fine for the United States or the rest of the international community, as the continuation of this dynamic will not only stagnate Iraq’s recovery, but in effect places it on a trajectory to become as isolated and poor as Iran. Unfortunately, Iran seems to have the upper hand with international attention focused on its confrontation with the United States.

Still, there may be opportunities to support Iraq as it navigates onto a better path. As dysfunctional as Iraq’s democracy can be, it is still a democracy and even the Iranian-backed political parties have to pay attention to the will of their various constituencies. This point means that an energized protest movement can help bring about conditions more favorable to Iraq’s recovery.

Despite Iraq’s challenges, there are several opportunities given the pressure from popular protests.

Opportunity #1: Get a prime minister candidate everyone can back. In the past, that meant an establishment candidate who was too weak to pose a threat to any party’s influence. Protestors, however, do not seem willing to settle for that this time. Of course, there is no scenario where a successful candidate for prime minister is not also acceptable to Iran. However, the protesters may be able compel the nomination of someone who is at least competent as well as associated with Iraq’s nascent nationalist movement, whatever his ties to Iran might be. Such a candidate would likely come from the Sadrist movement, which while not optimal for the United States would be better than the status quo.

Opportunity #2: Begin a credible constitutional reform process. As long as prime minister and cabinet nominations are subject to the competing interests of Iraq’s various political parties, it will continue to be difficult to form governments that have not just the clout but the competence to effectively govern. The good news is constitutional reforms are something everyone can get behind. Not only have the protestors made it a key demand but even Amiri, who benefits the most from the status quo, has called for constitutional reform. Of course, nailing down specific reforms will be difficult, but sustained protests may force Parliament to take these reforms more seriously.

Opportunity #3: For the United States: Don’t get in the way. The first two opportunities are ones only the Iraqis can take. The best thing the United States can do to get them to take advantage of those opportunities may be the hardest: stay out of the protestors’ way. That means finding ways to confront Iran outside of Iraq, as doing so in Iraq simply exacerbates Iraqi popular sentiments against any external influence and distracts from the anti-Iran character of the protests. This point does not mean that the United States should not defend itself. However, when immediate self-defense is not at stake, it does mean either foregoing a response or finding one that does not involve Iraq. This point also does not entail that the United States should do nothing. It should continue efforts to expose malign Iranian influence, especially its use of militias to murder protestors. Perhaps most importantly, it should withhold military and economic assistance it currently provides should Iraqi Security Forces again employ violence against peaceful protests.

In the end, there is little the United States can do to prevent Iraq’s slide into an isolated, poor Iranian vassal state if that is the route Iraq’s leaders choose to take. To prevent that outcome, however, the United States needs to proactively identify and take advantage of opportunities as they arise to sustain the current protest movement as well as empower Iraqi actors capable of setting conditions for reform.

How Israel is used to delegitimize Iraq’s anti-government protests

Adversaries have accused Iraqi protesters of sedition and even tried to link them to the United States and Israel.

The massive protests that have rocked Iraq since October 2019 and have brought down one government have also given the new prime minister designee a unique opportunity to overcome vested interests and deliver meaningful reform, according to Iraqi Council of Representatives Member Sarkawt Shamsulddin.

Why Arab Sunnis are disengaged from Iraq’s protests

If Sunni politicians and powerful tribal chiefs back an upheaval in Arab Sunni areas, they would risk losing the political and economic gains realized by their alliance with Iran-backed political powers and could face repression and marginalization.