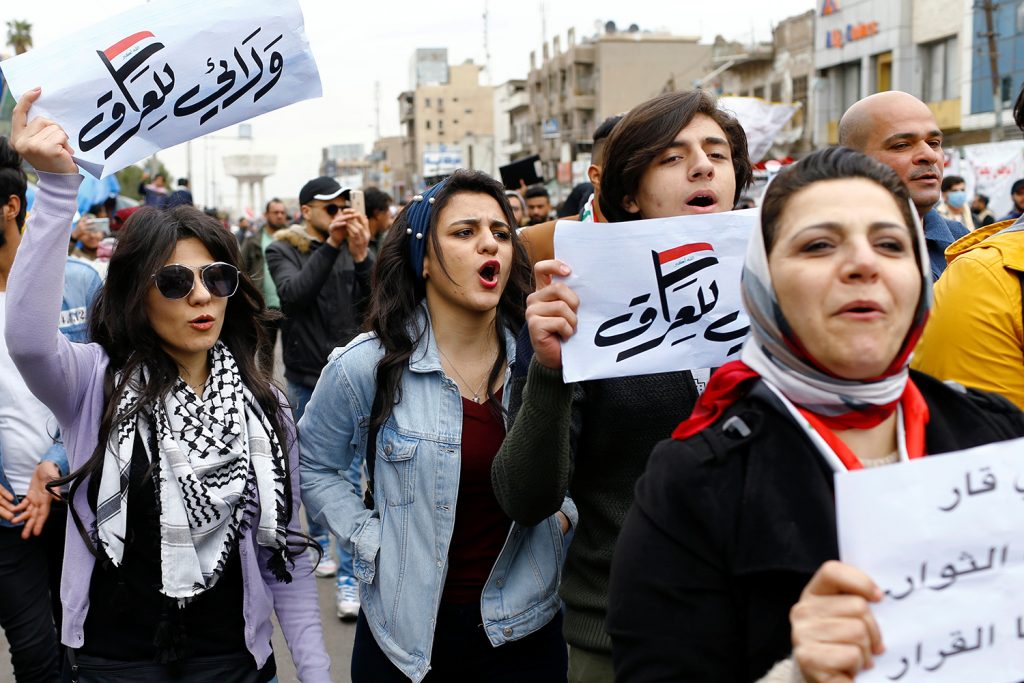 The massive protests that have rocked Iraq since October 2019 and have brought down one government have also given the new prime minister designee a unique opportunity to overcome vested interests and deliver meaningful reform, according to Iraqi Council of Representatives Member Sarkawt Shamsulddin.

Iraq’s youngest member of parliament and a member of the Iraqi-American Friendship Committee, Shamsulddin spoke at an on-the-record roundtable on February 11 convened by the Atlantic Council’s Iraq Initiative about the window for reform and the need to preserve Iraq’s delicate position as a partner of both the United States and Iran. He argued that the current protests in Iraq “would have been unthinkable five years ago,” proving resilient to the shadow of broader conflict, “despite the distraction of the US-Iranian confrontation.” Shamsulddin said the protests have “proven the critics wrong” and ushered in a “new era of normalcy in Iraqi political contestation.” The demonstrations have been “non-sectarian,” with protestor demands focusing on secular issues like “enough jobs, improved services, and less corruption.”

This context, Shamsulddin argued, provides Prime Minister-Designate Mohamed Tawfiq Allawi, who was nominated by Iraqi President Barham Salih on February 1, with a “unique mandate to carry out reform while the protestors remain on the streets.” Indeed, Allawi has called on protestors to do exactly that, as this could increase his leverage in talks with political parties about important cabinet appointees.

According to Shamsulddin, when Iraqi political parties previously demanded the right to appoint nominees in an opaque process of horse-trading, the result would often be “incompetence and mismanagement,” with the “finance ministry a particular problem.” By contrast, Shamsulddin praised the reformist tendencies of the “oil, electricity, and culture” ministers, who had been appointed directly by the previous prime minister, Adel Abdul-Mahdi. Prime minister-designate Allawi has asked protestors to help him buck the trend of appointment by party bloc, saying that “if the blocs attempt to impose their candidates on me, then I will tell you.”

The old arrangement, however, was not all bad, Shamsulddin maintained. He argued that the Kurdistan Regional Government (KRG) should still be allowed to appoint a representative to the cabinet in order “to avoid misunderstandings between Baghdad and Erbil.” Shamsulddin noted that Allawi will have to work hard to build relationships with the Kurdish north and Sunni west where he enjoys less support.

One thorny issue that will require careful navigation concerns protestors’ demands for a new electoral law. This would involve a new census free from allegations of sectarianism or fraud that could accurately reflect population by district. Such an initiative “had been on the previous government’s agenda,” Shamsulddin explained, but “may now need to be postponed to 2021” given the other pressing issues facing the government. The impact that such a delay would have on Allawi’s promise to hold early elections is not clear.

Another potential minefield for the new government relates to Iraq’s diplomatic relations with the United States and Iran, especially following the US killing in Baghdad of Iranian General Qasem Soleimani and key Iraqi militia leader Abu Mahdi al-Muhandis. Shamsulddin stressed that Iraq “opposes foreign interference in its internal affairs,” whether that comes from the United States or Iran. He noted that Soleimani was “meddling” in Iraq, but this did not justify the US response.

Shamsulddin also argued that “carrying out the assassination on Iraqi soil showed a lack of respect for the Iraqi government,” who already felt snubbed by the United States after “visits by [US] President [Donald] Trump and Vice President [Mike] Pence to US troops in Iraq without telling the proper Iraqi authorities.” Shamsulddin emphasized that “the United States is in Iraq at the prime minister’s invitation, with the express purpose of fighting ISIS. It must not overstep this mandate.”

Moreover, he claimed that “far from achieving its goals,” the US strike against Soleimani “has undermined the Iraqi government” and instead “strengthened the popularity of the Popular Mobilization Units (PMU).” Muhandis was the deputy commander of the PMU, a broad coalition of militias, some of which are closely linked to Iran. As such, Shamsulddin argued that the killing of Muhandis and Soleimani has generated a “wave of sympathy” for the PMUs and Iran. He said that “demobilization of the PMUs is a task that must be undertaken by Iraqis,” and that it was “already underway” albeit “unevenly implemented” to date.

Shamsulddin reiterated that “Iraq will seek to build partnerships with both the United States and Iran.” For Shamsulddin, if the United States wants to maintain a functioning relationship with Iraq, it “must devote its resources towards investing in Iraq’s future, rather than using Iraq to advance its own interests.” He warned that “if the United States seeks to sanction other Iraqi individuals or carry out further strikes, it may push relations to complete collapse. This would harm the interests of Iraqis first, but also Americans.”

Kyle Thetford is an intern with the Atlantic Council’s Middle East Programs. Follow him on Twitter @thetfordk.

The next task for Allawi is to win the consent from two mutually exclusive spheres of influence inside Iraq: the protesters who forced the resignation of the current government at a high cost with nearly a thousand lives lost and more than twenty thousand wounded and the entrenched political actors who are still unwilling to give up all or part of their extraordinary privileges and take steps to curb corruption.

Why Arab Sunnis are disengaged from Iraq’s protests

If Sunni politicians and powerful tribal chiefs back an upheaval in Arab Sunni areas, they would risk losing the political and economic gains realized by their alliance with Iran-backed political powers and could face repression and marginalization.