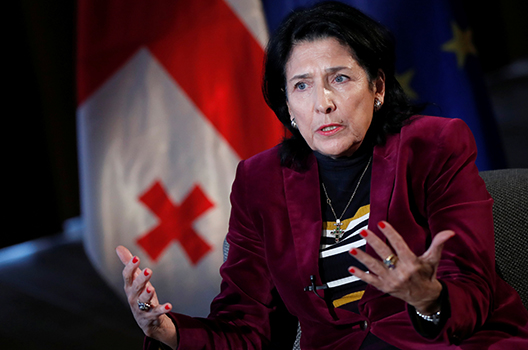 The election of Salome Zurabishvili as Georgia’s next president serves as a dual landmark in Georgian history: she will be the first woman to assume the office and presumably the last to do so by popular vote. In her election night victory speech on November 28, Zurabishvili took an important, positive step by acknowledging the need to reach out to those who didn’t vote for her after a very tough and divisive race. By doing so, she seemed to aspire to what parliament said it intended through its 2017 constitutional changes in the role of the president: to transcend party politics and represent the nation as the ceremonial head of state, while transitioning from the choice of citizens to that of elected officials.

As former European Union (EU) ambassador to Georgia, Per Eklund, said upon his departure in 2010, however, “being in Georgia is like dancing the tango, two steps forward, one step backward”. Now, in 2018, oligarch, Georgian Dream (GD) party chairman, and former prime minister Bidzina Ivanishvili, who campaigned on behalf of Zurabishvili, is the nation’s dance partner. Ivanishvili’s two steps forward to retain hegemony over the country’s political landscape has resulted in the distinct possibility of Georgia’s democratic development taking one step back.

After the narrow first round election showing of Zurabishvili, Ivanishvili’s anointed choice as an “independent” candidate and stand in for the interests of his GD, Ivanishvili pulled out all the stops to defeat the United Opposition’s Grigol Vashadze. The specter of the former prime minister’s nemesis—exiled former president and United National Movement (UNM) spiritual leader Mikheil Saakashvili—achieving an indirect victory and potential pardon through his electoral avatar would simply have been too much for Ivanishvili to accept. So for the second time in two years, GD officials essentially declared a state of emergency as the backdrop to an election, this time going so far as to warn of civil war.

Ivanishvili’s characterization of the most consistently popular pro-Western opposition party as criminals supported by Russians and Nazis, while still retaining the support of pro-Russians and Nazis for Zurabishvili, was aided and abetted by none other than Saakashvili’s decision to once again make himself the central issue of the campaign. The convicted-in-absentia, non-citizen, who has been frequently and surreptitiously taped inveighing his supporters (to no avail yet) to launch another revolution against the government, has never really atoned for the excess and overreach from his time in office. His chosen messages were “Make Georgia Great Again,” which seemed cognitively dissonant from the very circumstances that forced him from office in 2012, a matching set of anti-Semitic allegations, and possibly violating the law against direct advocacy by non-citizens, providing new ammunition for his opponents.

By overshadowing Vashadze, as he did to then-UNM presidential candidate Davit Bakradze in 2013, Saakashvili provided all the fodder necessary to deflect attention from voter disappointment with the economy and concern about potential corruption, as well as Ivanishvili’s continued and unaccountable central role in the governance of the country. Just as the first-round election had been a message of concern sent by voters to the ruling party, the second round turned on the latest and hopefully final rejection of the ubiquitous, once and future leader of Georgia, or Ukraine.

Vashadze has thus far refused to concede, claiming election fraud and demanding snap parliamentary elections. While not constructive, it isn’t surprising given the assessment of international observers, during both election rounds, of an unlevel and unfair playing field. This was undoubtedly the most questionable campaign period since the presidential election of 2008 and parliamentary elections in 2012, precisely because the government was concerned about opposition competitiveness threatening its hold on power. There were brazen  uses of administrative resources, censorship, questionable finances, and vote buying with no real expectation of accountability given the systemic, controversial, and highly politicized legal system that seems to be the one constant through successive governments.

Zurabishvili and others in and out of government didn’t accept the results of UNM victories in either the presidential or parliamentary elections in 2008, tried to force Saakashvili from office in 2009, and Ivanishvili supporters threatened to take to the streets if his victory wasn’t declared in 2012.  A hyper-partisan environment, consciously pursued by successive governments, has resisted real commitment to democratic institutional development and minimally cherry-picked checklists that never undermine their direct control of law enforcement, the use of administrative resources for electoral purposes, and the majority market share of media assets, primarily television.

Zurabishvili’s election, although noteworthy, was preceded by her almost complete disappearance from the second round, having shown herself inept as a candidate, alternating between using Russian narratives about the August War, making xenophobic statements, and accentuating her French roots in a very proud and ethno-centric culture.  She chose not to debate her opponent, instead having her son, a diplomat in the United Nations mission, challenge Vashadze’s son from his first marriage, who apparently resides in Russia.

Ivanishvili also made clear that his “independent” candidate would be dependent upon him, in the same way he hoped the man she will succeed in office, Giorgi Margvelashvili, was intended before disappointing him. Ivanishvili’s visage replaced Zurabishvili’s on billboards and he gave 45-minute interviews on government-aligned television as his Cartu Bank loaned her campaign 1 million lari ($370k) and forgave the debts of 600,000 Georgian voters, announced by his prime minister.  On election night, Ivanishvili and his male lieutenants stepped into the limelight first to declare victory and the former prime minister said he would “guarantee” that promises will be kept, making clear that no choice of voters in a self-proclaimed parliamentary democracy or “non-partisan” presidency matters more than his own personal judgment.

Finally, Ivanishvili’s history and GD embrace of publicly excoriating civil society in an attempt to politicize their findings and render them persona non grata with the public, regularly since taking power in 2012, doesn’t augur well for Georgia’s future, either in terms of academic and media freedom or judicial independence. Ivanishvili’s GD government, from parliament to more worrisomely the Ministry of Justice, signals emphatically that it does not accept the legitimacy of civil society critiques and implicitly empowers an ultra-nationalist and anti-democratic strain that could impede its avowed goals of joining the EU and NATO.

The Rose Revolution and 2012 change of government by the ballot are the watershed moments of Georgian democracy. The revolution is the Rosetta Stone of UNM and reason for Saakashvili’s enduring popularity among its members, leading a unified front against the corrupt government of former president and Soviet Foreign Minister Eduard Shevardnadze. Ivanishvili’s 2012 victory was an affirmation of his ability to bend political reality to his will in a battle against the authoritarian excesses  of UNM. The difference between the two is that civil society, media, and political opposition were at the heart of the Rose Revolution, so Saakashvili spent his time in office attempting to coopt them, into reflecting his vision of rapid societal modernization and European membership, without appreciation for the inherent process of dissent they represent.

By contrast, Ivanishvili approaches the same entities as challenges he has to overcome to win and, therefore, must be reorganized, or replaced and directed in harmony with his timetable of achieving the European Georgia he envisions by 2030. The common thread in both viewpoints is a lack of faith by political elites in the ability of Georgian citizens to navigate the roles of transparency, oversight, and accountability by independent media, civil society, branches of government, and competitive opposition.

Ivanishvili’s GD and Zurabishvili have expressed some positive post-election words, but their illiberal backsliding is Georgia’s defining act in its centennial year of independence. Absent concrete and enduring changes in their approach to democratic development, and the means of dissent that are fundamental to it, they will still be a commercial crossroads but a Eurasian bridge too far from the EU.

Luis Navarro is a Eurasian program fellow at the Foreign Policy Research Institute. He was formerly the National Democratic Institute’s country director in Georgia and chief of staff to US Sen. Joe Biden. Follow him on Twitter @Lusiko609.