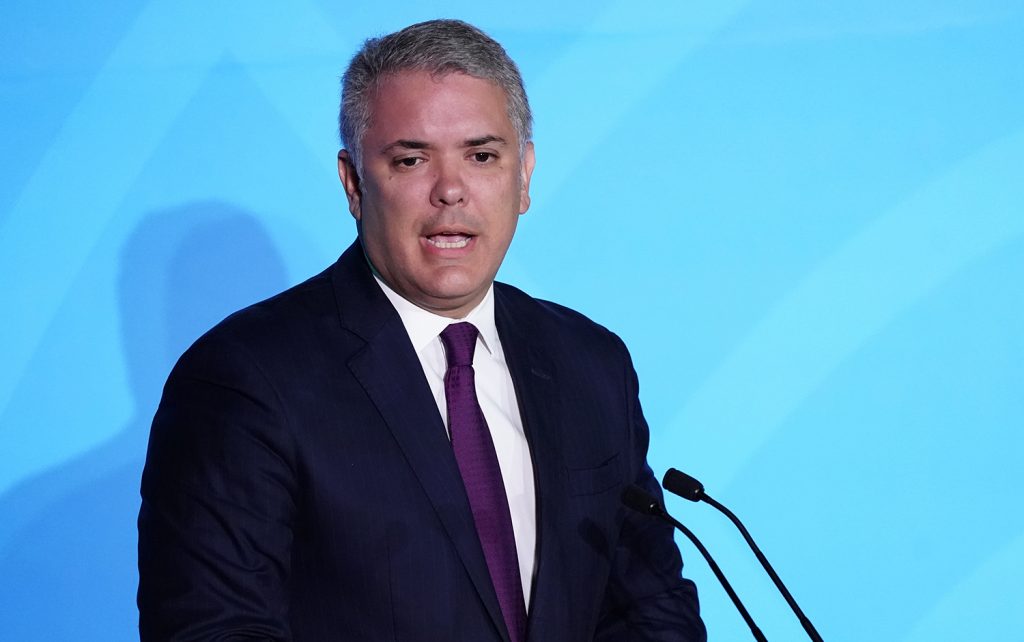 While “the relationship between the United States and Colombia has been strategic [throughout] history,” it is time for an important shift in the alliance between both countries, Colombian President Iván Duque Márquez said in Washington on September 26.

Twenty years after the United States enacted Plan Colombia—a major initiative helping Colombia combat the far-left insurgent group Revolutionary Armed Forces of Colombia (FARC) and eliminate the lucrative illicit drug trade and coca cultivation within the country—Duque said the United States and Colombia are ready for the next chapter of their partnership. This next phase, the Colombian president explained, should focus on solidifying rule of law within Colombia, promoting entrepreneurship and trade, and managing growing regional challenges.

Duque spoke at a Capitol Hill launch of the Adrienne Arsht Latin America Center’s new report The Untapped Potential of the US-Colombia Partnership, a product of the Atlantic Council’s US-Colombia Task Force providing a blueprint for how the US-Colombia partnership should be structured in the future. The Task Force is co-chaired by US Senators Roy Blunt (R-MO) and Ben Cardin (D-MD). The report argues for a “strengthened and modernized US-Colombia partnership” that deepens trade ties, promotes rural development in Colombia, cooperates on mitigating the global drug crisis, and finds a solution to the crisis in Venezuela.

“As one of the United States’ closest allies in the world, this moment is pivotal to double down with concrete and actionable proposals on how to recognize Colombia’s achievement and strengthen the bilateral relationship,” Atlantic Council President and CEO Frederick Kempe said.

When the United States initiated Plan Colombia in 1999, “Colombia was close to a failed state,” Cardin said. Although the US government sent more than $10 billion in assistance to Colombia as part of this effort, “we have gotten back much more than that in economic growth, let alone the other benefits we have had in terms of dealing with regional problems,” Cardin argued.

A key reason Plan Colombia was so successful, Duque explained, was “that it was conceived as a bipartisan [measure].” Having both Blunt and Cardin leading the Atlantic Council US-Colombia Task Force not only follows this tradition, Adrienne Arsht Latin America Center Director Jason Marczak said, but also demonstrates that “US foreign policy toward Colombia is one of the most significant examples of bipartisan consensus, and frankly, bipartisan success.”

“Colombia is a dramatically different place than it was when I first went twenty years ago,” Senator Blunt said, but “it also has some dramatically new challenges.” While the Obama administration’s Peace Colombia plan in 2015 attempted to alter the relationship after Plan Colombia, Duque argued that the initiative “was conceived for a period that is no longer the driver for what is taking place in Colombia,” necessitating a new revamped strategic framework.

The challenge next door

One of the most significant changes to Colombia’s position in the last few years has been the unfolding crisis in Venezuela, where the regime of Nicolás Maduro has clung to power despite an economic and societal collapse that has caused millions of Venezuelans to flee. An estimated 1.5 million Venezuelans have fled to Colombia, which has embraced an open-door policy to those fleeing Maduro. Duque said that accepting Venezuelan migrants was “the morally right thing to do,” but stressed that Colombia needs more assistance to cope with “the most horrendous migration crisis in Latin America’s recent history.”

Cardin thanked Duque and the Colombian people for saving “thousands of lives by allowing those that are at risk to be able to get into your country.” Cardin acknowledged that “it has had a real toll” on Colombia and stressed that “the international community has not stepped up the way it should. There needs to be a greater response.”

In addition to the strain the influx of migrants has caused Colombia, Duque also highlighted the support Maduro is giving to illegal and terrorist elements operating within Colombia. “Maduro is a brutal dictator that has provided safe haven and that has sponsored…terrorist organizations in his territory,” Duque explained. The Colombian president told the United Nations General Assembly on September 25 that his “government has irrefutable and conclusive proof that corroborates the support of the dictatorship for criminal and narco-terrorist groups that operate in Venezuela to try and attack Colombia.” The president presented a dossier outlining the allegations against the Maduro regime, which Duque said he gave to the UNGA president and UN Secretary General António Guterres.

Progress on internal challenges, but more to do

Despite the progress made from Plan Colombia in eradicating drug production and trafficking in the country, Duque admitted that his country has taken a step back in recent years. From 2015 until August 2018, he explained “Colombia passed from having less than 60,00 hectares” of illegal drug crops “to more than 200,000 hectares” when he took office as president in the summer of 2018. Duque reported that his government has made considerable progress in stemming the tide of drug production, recording a drop in the drug crop “for the first time in seven years.” He argued that his government will need to adopt a range of tools to beat back the illicit drug trade, including crop substitution, manual eradication programs, alternative economic development initiatives, and even aerial precision sprays “to go to places that have landmines or snipers that are paid by cartels that are supporting illegal groups in the country.”

Duque also stressed the successful changes his government has made in the implementation of the 2016 peace deal with the FARC. He said that his government wants to offer “full support” to former FARC participants who “genuinely want to build the path to legality,” but added that “those who want to go back to criminal activities will be faced with all the weight of the law.” Duque added that his government has made substantial progress in creating new economic and social programs to help rehabilitate regions affected by FARC violence, although more work needs to be done.

While the challenges of Venezuela, drug production, and implementing the peace plan will remain to be top priorities in the next US-Colombian partnership, there is also tremendous opportunity for the United States to grow its economic ties to Colombia, Blunt said. “We should be further economically linked to this country that has maintained a democracy in an area where democracy was hard to maintain for generations now,” the senator said, adding that the United States “should be their number one investor and we should be the number one place where Colombians want to invest.”

Duque highlighted the dynamism of the Colombian economy, which continues to grow despite slower Latin American growth. Even the Venezuelan crisis has not hobbled Colombia, as Duque noted that “the most important demonstration of the resilience of Colombia is that having one of the major migration crises in the world, [yet] the economy is growing at 3 percent.”

As Colombia looks to confront these new challenges and continue its economic and social development, Duque stressed the necessity of strategic plans such as the new Atlantic Council report. “We have to build the relationship thinking on the short-, mid-, and long-term,” Duque argued. He lauded the new report as a great step towards what he “really want[s] to build with the United States: mov[ing] to a second phase of the bilateral relationship.”

“We are receiving Venezuelans with a sense of solidarity.”

The next four years are an opportunity for each government to implement reforms necessary for the growth and development of the region’s three largest democracies.