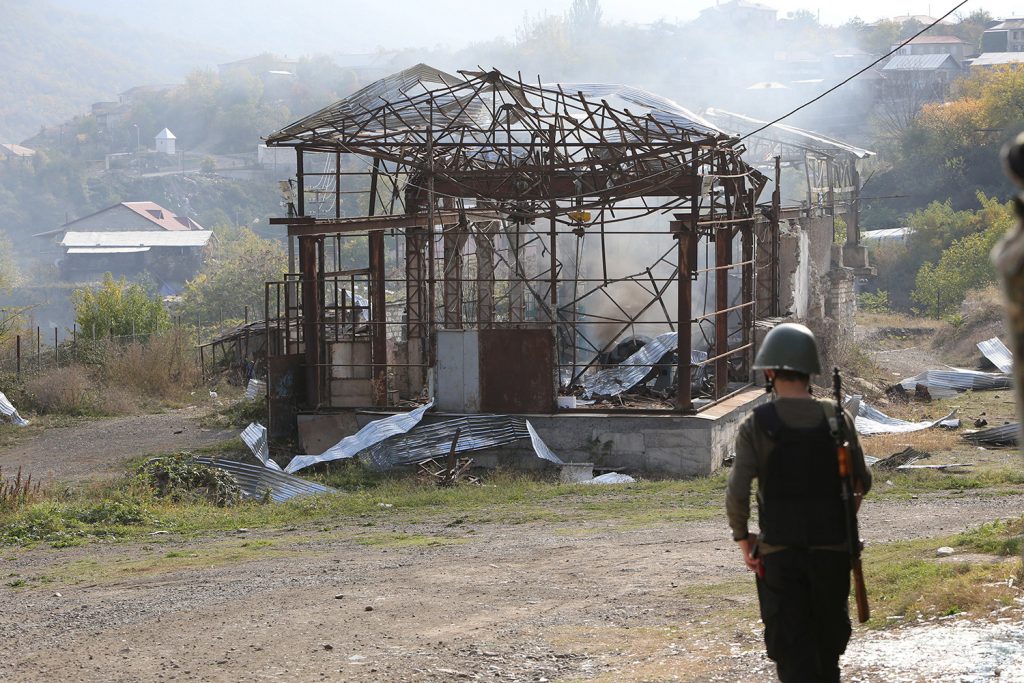 Azerbaijan seems poised to capture a crucial city that could end the military phase of its war with Armenia. Securing a political victory in the war, however, will require Azerbaijan’s restraint to avert a humanitarian catastrophe that could arise were its forces to press all the way into the capital of the region.

On October 29, the leader of Nagorno Karabakh, Arayik Harutyunyan, issued an ominous warning that Azerbaijani troops were within 5 kilometers of the city of Shushi.  He then appealed to all residents of Nagorno Karabakh to join the fight to hold the city, stressing, “As in 1992, when our victory began with the liberation of Shushi, today, our victory depends on the defense of Shushi.”

Known to Azerbaijanis as Shusha, this city within Nagorno Karabakh is of great importance to both sides. Culturally, both Armenians and Azerbaijanis consider the city a cradle of their respective cultures. Militarily, it sits atop commanding heights above Nagorno Karabakh’s capital, Stepanakert (or Khankendi for Azerbaijanis). Whoever controls Shusha controls the “Lachin Corridor,” the lifeline linking Armenia to Stepanakert via the occupied Azerbaijani district of Lachin.

During the past month, Azerbaijan’s army has been decimating Armenian forces.  Initially, Azerbaijan relied on precision drone strikes (using drones purchased from Turkey and Israel) to destroy Armenia’s high-value military assets (e.g., air defenses, tanks, and artillery) and regain its districts of Fuzuli and Jabrayil, which, like five others that surround Nagorno Karabakh, had been occupied by Armenia since the first Karabakh war. Azerbaijani forces then achieved a military breakthrough along the border with Iran about two weeks ago. Azerbaijan subsequently shifted to a combined arms operation that has pushed northward, regaining its regions of Zenglian and Gubadli, and now pressing into Lachin and toward Shusha.

Azerbaijan’s battlefield successes have sparked fears that the Azerbaijani military might now press its advantage to Shushi and beyond to Khankendi, spurred on by Azerbaijani citizens’ newfound nationalist fervor. Such sentiment has intensified as civilian casualties have mounted from Armenian shelling (including by tactical ballistic missiles) of Azerbaijani towns far from the conflict zone. These attacks have been accompanied by Azerbaijani shelling of Armenian civilians in Stepanakert/Khankendi.

Convincing Armenians to remain in Nagorno Karabakh will be difficult. They fear for their physical security and loathe being forced to become citizens of Azerbaijan if Nagorno Karabakh returns to Baku’s control.

In an October 29  interview to Russia’s Interfax News Agency, however, President Aliyev suggested a way forward. On security, Aliyev announced that Azerbaijan is “…ready to stop all military operations immediately” if Armenian Prime Minister Nikol Pashinyan commits to withdraw all Armenian troops from the conflict zone. It is important to recognize that Aliyev insisted only on a commitment by Yerevan to withdraw its troops rather than actual withdrawal.

On citizenship rights, Aliyev reiterated his call for negotiations to end the conflict on the basis of the so-called “Basic Principles.” First tabled in November 2007 by the Organization for Security and Cooperation in Europe’s Minsk Group, the Basic Principles allow inter alia for Nagorno Karabakh’s Armenian residents to claim they are not citizens of Azerbaijan because they live in a region whose legal status is ambiguous and not necessarily part of Azerbaijan.

Pashinyan will resist accepting these conditions. He has already declared “There is no diplomatic solution” to the war over Nagorno Karabakh and publicly abandoned the Basic Principles and their fundamental formula of “land for peace,” instead embracing a formulation of “new territories for new wars.” President Aliyev also faces political danger at home if he defies intense popular sentiment for total military victory.

As they fill a diplomatic vacuum in the region, Russia and Turkey may now be planning to counsel their respective partners to show restraint. In the October 10 ceasefire agreement Russia brokered between Armenia and Azerbaijan, Russian President Vladimir Putin apparently compelled Pashinyan again to embrace the Basic Principles, (which his predecessor and President Aliyev informally accepted in January 2009).  Meanwhile, Turkey’s Daily Sabah newspaper reports that President Recep Tayyip Erdoğan has told Putin that Russia could lean on Armenia while Turkey could do the same with Azerbaijan to end the fighting.

The leaders of Armenia and Azerbaijan would be wise to embrace the political cover their Russian and Turkish counterparts might provide. To survive politically, Pashinyan needs Putin’s public support if he is to stop the fighting by committing to withdraw all Armenian troops and proceed with peace talks in line with the Basic Principles. But by doing so, Pashinyan would save many Armenian soldiers’ lives and provide Nagorno Karabakh’s Armenian residents a chance for a peaceful and prosperous future.  He would also bring Armenia into compliance with four United Nations Security Council Resolutions calling for its troops to withdraw from the Azerbaijani regions they occupy. And if Aliyev is willing to defy the Azerbaijani public’s demands for military vengeance, he will spare his country international pariah status while enabling Azerbaijan to attract the international support it will need to rebuild its recovered lands.

Matthew Bryza is a senior fellow with the Atlantic Council Global Energy Center. He served as a US diplomat for over two decades, including as US ambassador to Azerbaijan, deputy assistant secretary of state for European and Eurasian affairs, and as a former US mediator of the Nagorno Karabakh conflict.

Image: Smoke rises over a damaged building following alleged shelling in Stepanakert, in the course of a military conflict over the breakaway region of Nagorno-Karabakh, October 28, 2020. Vahram Baghdasaryan/Photolure via REUTERS