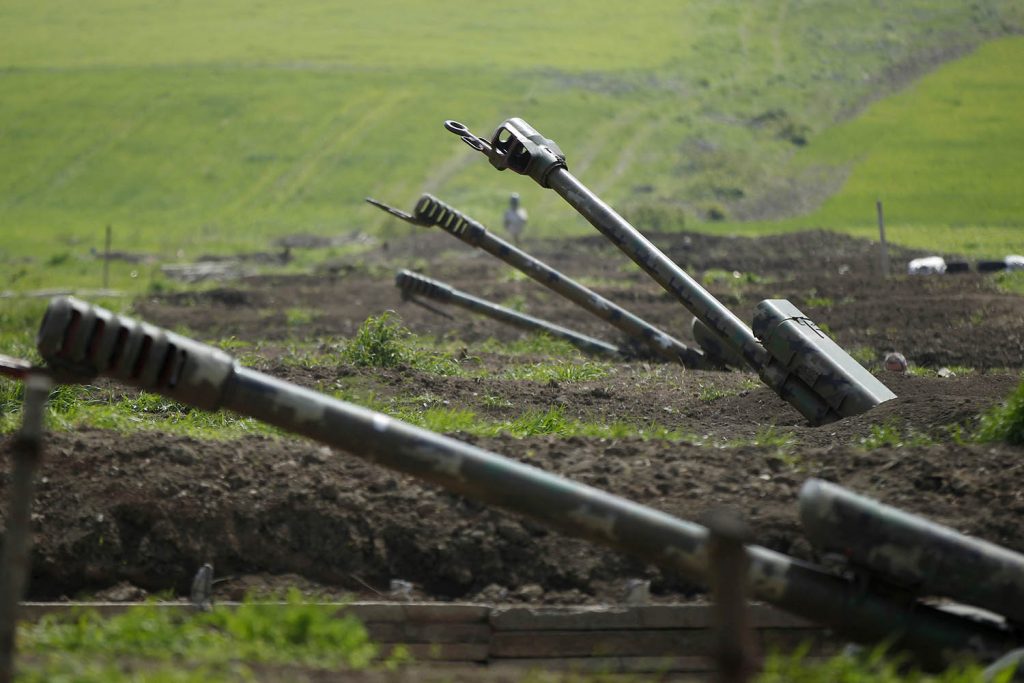 COVID-19, plague, and now war. As if 2020 was not cruel enough, fighting erupted on September 27 between Armenia and Azerbaijan along the contact line of the region of Nagorno-Karabakh, leading Armenian Prime Minister Nikol Pashinyan to declare martial law and total mobilization. President Ilham G. Aliyev of Azerbaijan addressed his nation, and partial martial law was declared in a number of Azerbaijani regions, including the capital Baku. Karabakh has been at the heart of the Armenian-Azeri conflict since 1988, which resulted in the 1994 ceasefire and occasional flareups.

The current escalation is the most serious since 1994. Armenian Deputy Defense Minister Artur Sargsyan has announced preliminary figures suggesting that sixteen Armenians have already been killed, with over 100 wounded. Azeri sources report “liberation” of up to eight villages and one regional center. The escalation comes two months after a three-day flare-up in the Tovuz/Tavush region of Azerbaijan/Armenia respectively, hundreds of kilometers from Karabakh.

Nagorno-Karabakh, which translates to “mountainous black garden,” is an amalgam of Russian and Turkic words. It is a landlocked region within Azerbaijan’s borders, occupied by Armenia and surrounded by a militarized buffer zone. The region’s geography is further complicated by the exclave of Azerbaijan’s Nakhichevan Autonomous Republic within Armenia, located southwest of Nagorno-Karabakh near the Iranian border. Any massive Azerbaijani action against Karabakh may result in an Armenia offensive against Nakhichevan.

Following the USSR’s dissolution, longstanding tensions over the conflicting claims bubbled over. In 1988, the Nagorno-Karabakh National Assembly voted to become part of Armenia, sparking widespread violence between Azeri and Armenian forces and ethnic cleansing on both sides. The international community did not recognize the vote, as it accepted the territorial integrity of the states that emerged from the Soviet Union.

A referendum held in 1991—boycotted by the region’s Azeri residents—declared independence from Azerbaijan. By 1992, the conflict expanded into a full-scale war, resulting in between 20,000 and 30,000 military deaths and over one million displaced people.

The Armenian and Azerbaijani presidents signed a Russian-brokered ceasefire in 1994, leaving Nagorno-Karabakh under nominal Armenian control. That same year, the Organization for Security and Co-Operation in Europe (OSCE) formed the Minsk Group, tasked with facilitating a lasting peace between the two nations. The organization’s co-chairs—France, Russia, and the United States—do not recognize Nagorno-Karabakh’s self-proclaimed independence yet oppose surrendering the area entirely to Azerbaijan before a negotiated solution.

Despite the efforts of the Minsk Group diplomats, the two belligerents refuse to solve the conflict peacefully. Nagorno-Karabakh’s location on the far eastern fringe of Europe, the United States and Europe’s preoccupation with the Middle East and North Africa, and the challenges of diplomatically engaging authoritarian regimes have limited progress. Divergent interests among the Minsk Group’s principals have transformed the peace platform into a forum for posturing rather than peacebuilding.

“War has started between Armenia and Azerbaijan. It was as predictable as it is unnecessary,” Richard Kauzlarich, the former US Ambassador to Azerbaijan, told us. “The poor people of Armenia and Azerbaijan are paying the price for uninspired leadership in Baku and Yerevan that refused to seize opportunity after opportunity to peacefully deal with the conflict regarding Nagorno Karabakh. Now the war is no longer about Nagorno Karabakh. How this will end is uncertain, but one thing is sure—Azerbaijanis and Armenians will die because of this unnecessary tragedy. [This is an example of how] the commitment of outside powers to a peaceful resolution won’t work if it is greater than the commitment of the two parties to the conflict—Armenia and Azerbaijan.”

Tensions have yet again erupted into violence on an unprecedented level, and regional powers have taken sides, with Turkey coming to the aid of Azerbaijan while traditionally Armenia-aligned Russia has called for a renewed ceasefire and further peace talks. “Launching a new attack against Azerbaijan, Armenia has once again shown that it constitutes the biggest threat against peace and comfort in the region,” Turkish President Recep Tayyip Erdoğan said on September 27. Russian President Vladimir Putin called for an immediate end of hostilities after talking to the Armenian Premier Nikol Pashinyan. Russia is an historic ally of Armenia and the Karabakh flare-up could be another stress-test for the complex Moscow-Ankara relationship.

Oil is important in this conflict as well. Two pipelines carry oil and gas from Azerbaijan through the Caucasus, both of which pass only 60 km from Nagorno-Karabakh. The oil and gas rich Caspian region has only two export routes to the West: one through Russia, and one through the Caucasus. Conflict in Nagorno-Karabakh could endanger the two pipelines: Baku-Tbilisi-Ceyhan Main Oil Pipeline and the Trans-Anatolian gas pipeline. Europe’s hopes of tapping the Caspian’s resources to reduce its dependence on Russian crude oil sources may be in danger. Under its Southern Gas Corridor strategy, the EU hopes to see an additional 16 billion cubic meters of Caspian gas come through the Southern Caucasus Pipeline.

Azeri-leaning sources are reporting Armenia’s deployment of Kurdistan Workers’ Party (PKK) fighters close to the Baku-Tbilisi-Ceyhan oil pipeline and the Southern Gas Corridor in this recent outbreak of violence, while pro-Kurdish and Russian sources report the deployment of Turkish-supported Muslim militias from Syria to Azerbaijan—to fight Armenians.

Iran is now stepping in, demanding peace and claiming its intentions “to use all its capabilities to help talks to start.” This might prompt the United States to take a proactive role in negotiating a ceasefire.

Russia has its hands full. It has complicated relations with Pashinyan, who came to power in a “velvet revolution” without Moscow’s blessing. It enjoys strong ties with Baku, including arms sales. It is preoccupied with the opposition leader Alexei Navalny’s poisoning, support of the Belarusian dictator Alyaksandr Lukashenka, and the upcoming US election. The Kremlin will need to balance its desire to protect its political-military influence in the region with securing its strategic and economic interests vis-à-vis Turkey.

Passions are high in both Baku and Yerevan. The risk of further escalation is great and the conflict could also drag in Moscow and Ankara. That is in nobody’s interests. The United States should activate the Minsk Group immediately to establish a stable ceasefire. Inaction is too dangerous.

Ariel Cohen is a nonresident senior fellow at the Atlantic Council and director of the Energy, Growth and Security Program at the International Tax and Investment Center (ITICnet.org). He is the founding principal of International Market Analysis Ltd.

Hayley Arlin is an intern with the International Tax and Investment Center.

Armenia, Azerbaijan, and Georgia now face a new and growing threat: the steady stream of propaganda related to how and why COVID-19 is spreading throughout the Caucasus.