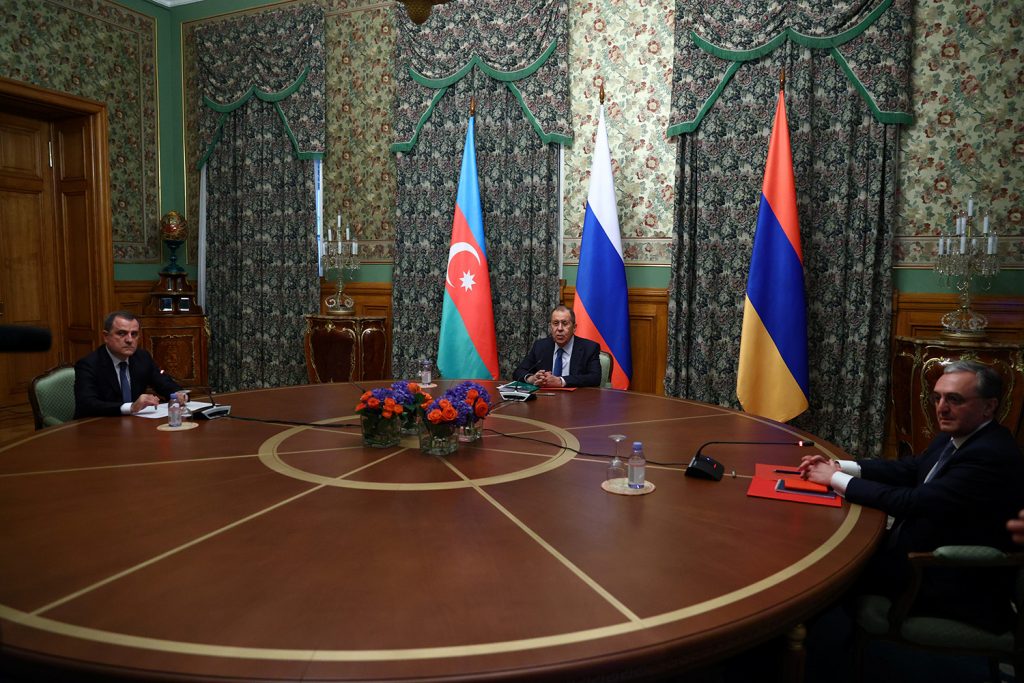 Russian President Vladimir Putin filled a diplomatic vacuum in the South Caucasus on October 9 by cajoling the leaders of Azerbaijan and Armenia to agree to a ceasefire in their long-time war over Nagorno Karabakh, which resumed on September 27. While dubbed a temporary humanitarian ceasefire to enable prisoner exchanges and recovery of fallen soldiers’ bodies, Putin likely intends it to be permanent and to pave the way for renewed negotiations of the Nagorno Karabakh conflict under the Organization for Security and Co-operation in Europe’s (OSCE) Minsk Group. While Azerbaijan would have preferred to continue pressing its military advantage, it will now have a chance to return to negotiations from a new position of strength.  The agreement also suggests that Armenian Prime Minister Nikol Pashinyan was forced to retract several provocative statements that had torpedoed the peace talks as the price for Azerbaijan ceasing its military operations.

Assuming the agreement holds (despite mounting reports of ceasefire violations hours after it went into effect), its third and fourth points commit Azerbaijan and Armenia to return to negotiations under mediation by the OSCE’s Minsk Group according to the “Basic Principles” preliminarily agreed (though never finalized) in January 2009.  Both countries also commit to the “immutability” of the negotiating format.

The “Basic Principles” call for the return to Azerbaijan’s control of all seven Armenia-occupied territories surrounding Nagorno Karabakh in exchange for Nagorno Karabakh gaining a temporary legal status, which would be finalized at an indeterminate time in the future by a vote of the region’s population. The ethnic Armenian residents of Nagorno Karabakh would also obtain security guarantees in the form of international peacekeepers and a transit corridor connecting Nagorno Karabakh to Armenia. This was thus a variant of the classic formula of “land for peace.”

The negotiating format, meanwhile, is an OSCE-led discussion between the countries of Azerbaijan and Armenia and without participation by representatives of Nagorno Karabakh, a political entity that is not recognized by any country, not even Armenia.

When Pashinyan came to power in 2018, he originally committed to try to finalize the “Basic Principles.” He even issued a joint statement with Azerbaijan President Ilham Aliyev following their first meeting committing them both to strengthen the previous ceasefire of 1994 and to “prepare their populations for peace,” which meant, to convince their citizens to accept the “Basic Principles.” During the past eighteen months, however, Armenia has reversed course. In May 2019, Pashinyan and his minster of defense, Davit Tonoyan, publicly declared the approach of “land for peace” had been replaced by a new doctrine of “new wars for new lands.” Then, in August 2019, Pashinyan announced, “[Nagorno Karabakh] is Armenia. Period.” Finally, Pashinyan publicly repudiated the “Basic Principles,” calling instead for a fresh start to peace negotiations in a new format that would include representatives of Nagorno Karabakh as equal participants with those of Armenia and Azerbaijan.

By now agreeing in the October 9 ceasefire agreement, however, to return to negotiation of the “Basic Principles” and in the original negotiating format, Prime Minister Pashinyan has retracted his previous provocative statements, beating a diplomatic retreat that will likely damage him politically, perhaps severely. This was apparently the price President Aliyev extracted, presumably with Putin’s support, in exchange for not pressing Azerbaijan’s military advantage on the ground.

Aliyev’s agreement to cease military operations, however, is deeply unpopular in Azerbaijan, where nationalist sentiment for a “total military victory” (meaning Armenia’s full withdrawal from Nagorno Karabakh and all seven surrounding territories) had reached fever pitch. Aliyev can contain popular disappointment by arguing that Azerbaijan has won a preliminary victory by successfully using military force to compel Pashinyan to retract his provocative statements (and for which Aliyev had demanded an apology) and to return to the negotiating table with Azerbaijan now enjoying a new and stronger position. Indeed, Azerbaijan has now recovered significant swaths of its territory in the occupied districts of Jabrayil and Fizuli, as well as the district of Agdere inside Nagorno Karabakh itself. These gains also enable Aliyev to argue to his citizens that Azerbaijan has now recovered an unprecedentedly large portion of its lands, which will enable hundreds of thousands of displaced persons to return to their homes.

What President Aliyev is less likely to argue publicly is that the October 9 ceasefire agreement also resolves two challenges related to Azerbaijan’s military operations. First, the agreement removes Azerbaijan’s need to manage its growing number of Armenian prisoners of war, with the International Committee of the Red Cross now stepping in to conduct prisoner exchanges between both sides. Second, the agreement allows Azerbaijan, at least for now, to consolidate its military gains while conserving soldiers’ lives and weapons, just as fighting was moving from flat lowlands into more difficult terrain in hills and mountains.

The big winner at the moment, however, appears to be Putin. By taking control of negotiations and issuing a surprise summons to Moscow for the foreign ministers of Azerbaijan and Armenia, Putin has demonstrated once again that he is the diplomatic kingmaker of the South Caucasus. No other international leader was either willing or able to persuade Azerbaijan to stop its military offensive, which was gaining ground and prompting desperation in Armenia. By doing so, Putin will now be seen as living up to Armenia’s expectations of support from its treaty ally under the Collective Security Treaty Organization, but without involving Russia directly in the fighting. Moreover, by avoiding a “total victory” by Azerbaijan, Putin has averted the political challenges of both a Baku that might become too difficult for Moscow to manage, as well as accusations of having “abandoned Armenia.”

In short, the October 9 ceasefire agreement between Armenia and Azerbaijan is a diplomatic masterstroke for Putin in pursuit of his perennial goal with regard to the “frozen conflicts around Russia’s periphery, “to keep the pot stirred, but not let it to boil over.”

Matthew Bryza is a senior fellow with the Atlantic Council Global Energy Center. He served as a US diplomat for over two decades, including as US ambassador to Azerbaijan and deputy assistant secretary of state for European and Eurasian affairs.

Author’s translation of the agreement follows below: