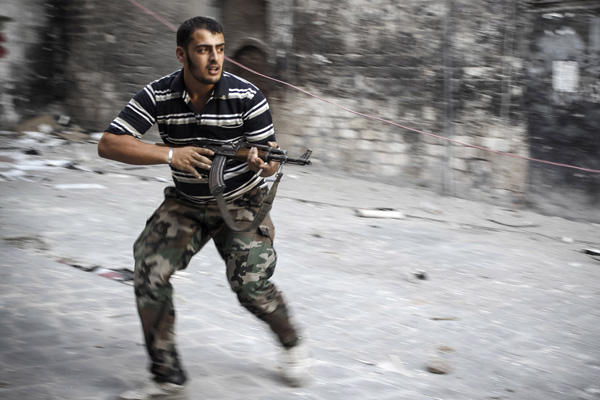 America sitting back and refusing to go all-in with the Syrian revolution, while letting regional powers do the heavy lifting and pursue their own agendas, rankles those who believe American “leadership” on Syria is the necessary ingredient to ensuring its future as an American ally.

America’s apathy in refusing to arm Syrian rebels will, supposedly, translate into atrophy of its power. Already a mythology of the lost opportunity to reshape the politics of the Middle East is emerging. The very minimum necessary effort to reverse this precipitous and voluntary decline, these critics argue, is for the United States to begin sending weapons in Syria.

To fail to do so as other countries arm Syrian rebels sometimes strikes commentators and analysts as an even more egregious sign of decay (even as it revives a dubious notion that American decisiveness can make up for the geopolitical difficulty of competing for dominant influence in a country – whether it’s Afghanistan, Iraq, or Syria – with its most powerful neighbors). Walter Russell Mead, editor of The American Interest, argues along with many others that staying out of the Syrian arms market will simply lead to an extremist takeover:

It is still the Saudis deciding who gets the weapons and the dough, and presumably the Saudis who have the influence over the rebels themselves. Those who have long memories when it comes to unpleasant truths will remember what happened in Afghanistan when the United States let Pakistan and the Saudis decide which groups got support in the fight against the Soviet Union.

That Mead thinks American provision of weapons would be somehow easier than in Afghanistan is highly questionable. The US had no choice but to let Pakistan’s ISI pick winners, it needed the ISI, and indeed, a massive expansion of the ISI and support of the Pakistani praetorian state, simply to move armaments into Afghanistan.

Who, exactly, is going to distribute weapons in Syria? The notion that Americans sitting in, say, Gaziantep or Al Mafraq really have the last say about where weapons ultimately end up in Syria is absurd, whether they are arriving on the American tab or not. It will be Arab and Turkish personnel, or else Syrian arms trafficking networks, doing the bulk of the heavy lifting inside Syria. All of these actors have differing priorities both from each other and the United States. The notion that US cash will somehow provide sufficient leverage to micromanage this process is dubious, since it is not as if the Gulf states are particularly in need of our money (though they are always happy for us to foot more of the bill).

Ensuring that proxies stay in line is not a question of leadership, it is a question of control and leverage. There are two broad options for ensuring this. One would be to send, on an ambitious scale, Special Forces and paramilitary officers specializing in unconventional warfare to actually supervise and monitor not simply weapons shipments but the groups receiving them inside Syria. This was more or less the approach the US used in Laos during the Indochinese wars. There, US proxies received their arms from US aircraft, with US Special Forces and CIA officers working closely alongside armed groups in country.

Another possible model, used in Nicaragua, would be for a smaller number of US personnel to operate in bordering safe-havens, and let the proxy groups strike across the border. This must overcome numerous pitfalls. Keeping supervision effective from across the border fosters dependency and reduces the ability of these groups to win territory and legitimacy for logistical and political reasons. This was not much of a problem with the Contras, but then again the Contras never made gains outside rural Nicaragua and never seriously contested cities. In Syria’s case, the need to actually govern territory and establish local legitimacy forces the US then to rely on intermediaries to fill the logistical gap, as the ISI did in Afghanistan, or to risk America’s favorite insurgents failing to effectively establish influence and control vis-a-vis other insurgent groups.

Obviously, America was nowhere near as hands-on in Afghanistan’s fight against the Soviets, as Mead points out, but the most effective manner of establishing proxy forces requires a large commitment of precious few assets. CIA paramilitary and SOF capabilities are badly needed in a variety of theaters, particularly as Security Force Assistance and Foreign Internal Defense are now critical and increasingly overstretched components of our counter-terrorism strategy.

Besides, proponents of arming our way into the hearts of Syrian rebels both inflate attitudinal benefits and conflate them with behavioral changes. For one, just because a weapon is American-bought will count for little to fighters who receive them from Arab or Turkish hands. Nor should we assume receiving US aid will sour them to advances from the Saudis and others. After all, the more sellers there are, the more the buyer can bid up the price of their affection and loyalty. In Angola’s war of independence and subsequent civil war, UNITA and the FNLA took support from China even after or in the midst of US advances, and neither side spurned Chinese advances even though China also supported MPLA forces at various times (indeed, it did so to try and win over the MPLA from the USSR – a move which failed).

Even if the US somehow outright wins the favor of Syrian rebel groups, a rebel group which calibrates its behavior to US preferences rather than the political realities of controlling Syria is going to have trouble surviving in the post-war climate. This is especially crucial when confronting the possibility of countering extremist movements in Syria. Despite many assertions that we must arm Syrian rebels for victory, beating Assad hardly solves their problem. Given the cohesion and capabilities of various jihadist groups in Syria, they are not simply going to melt away. In all likelihood, their current backers will want to keep support flowing in order to ensure they have a proxy or ally free from US influence when the dust settles. Considering the backlash the US faced simply for designating Jahbat al Nusra a terrorist group, trying to actually cut off it and similar groups’ supplies, if even practically feasible, would jeopardize US influence and widen splits within the Syrian revolutionary coalition.

Even assuming rebels found the US proscription of extremist fighters tolerable, what would the US need to do to precipitate a crackdown on them by its erstwhile Syrian allies? In Libya, the government let extremist organizations with anti-Western tendencies tear apart shrines, Western graveyards, and attack diplomats almost without consequence, despite NATO’s direct intervention to help topple Gaddafi. In Syria, where extremist groups are even better organized and armed relative to their secular and mainstream Islamist counterpart, escalating conflict with jihadists and opening a second stage to the Syrian civil war is even more dangerous. Western support for secularists and amenable Islamists will not cow jihadists into disarming. As Jihadica points out, posters on Shumukh al Islam are already asserting that what happens after the fall of the regime is of even greater concern than the war against the regime itself.

Let’s be clear of what the United States would need the secularists and Islamists to undertake to stamp out the jihadists in Syria. Not simply unite, not simply win, but maintain the motive and capability to fight and kill their one-time partners once they have finished with the regime. This is not a mere competition for influence; it will be war.

In Libya, even after Benghazi, US pressure, and additional support on counter-terrorism, the group many blame for the attack, Ansar al Sharia, openly operates in Benghazi and the central government cedes them a role in militias’ security provision there, even as assassins and kidnappers target Libyan security forces there. In Iraq, despite a small Sunni population and a relatively capable and competent Iraqi government, flush with years of US training, equipment, and cash (and not to mention a concerted, years-long US effort to eradicate the group), AQI still claims responsibility for creating havoc across Iraq. The audacity of even significantly checking extremist groups in Syria merely with US supplies and the goodwill of whatever support we win deserves much, much further scrutiny from policymakers and practical justification from advocates of arming Syrians for victory.

Arming the rebels to win the war more quickly is a relatively straightforward case to make, but to address the second and third-order concerns relies on outlining logistical mechanisms, force structures, and direction of post-war rebel military activities that are far less appetizing and far less likely to achieve their intended ends. It is easy to wax grandiose about the need for American leadership and spit venom at its lethargy, but outlining how the US would actually take the lead on the ground in Syria and convince its supposed new friends to launch a new war against their cobelligerents is a much more difficult proposition. Despite the desire to demonstrate “leadership” and take action, the results of entropy can easily thwart these high-minded attempts to counteract geopolitical atrophy. Simply advocating that we arm the rebels is something, but without an explanation of how we would arm them, how we would maintain our influence, how we would check proliferation and misdirection, and how we would translate that into the military defeat of jihadist organizations, we should not accept at face value that this something is better than nothing.

Daniel Trombly is a writer on international affairs and strategy. The piece first appeared on Trombly’s personal blog.