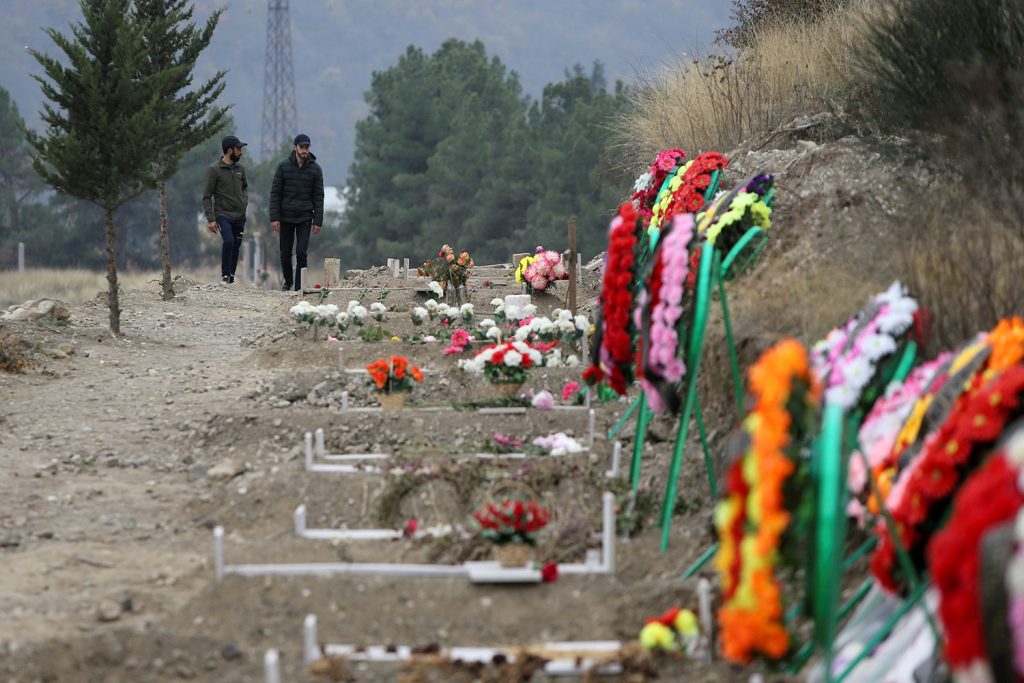 The November 10 peace agreement between Azerbaijan and Armenia outlines a viable political solution of the Nagorno Karabakh conflict, setting the stage for a potential durable settlement to the Caucasus’ most dangerous flashpoint. The agreement not only ends one of the world’s longest standing conflicts, but also could catalyze other diplomatic and economic agreements that can restore peace, prosperity, and stability throughout the region.

Perhaps counterintuitively, this possibility for peace resulted from an Azerbaijani military victory. Previously, Armenian Prime Minister Nikol Pashinyan lamented there was “no diplomatic solution” to the conflict, and accused Azerbaijan and Turkey of plotting  genocide of Armenians in Nagorno Karabakh. Then, on November 8, Azerbaijan regained the strategically vital town of Shusha, which commands heights above Nagorno Karabakh’s capital, Stepanakert (or Khankendi for Azerbaijanis), and is of tremendous cultural significance for Armenians and Azerbaijanis alike. From Shusha, Azerbaijani forces could have shelled Stepanakert with ease and cut off the main road linking Armenia with Nagorno Karabakh. The day after regaining the town, however, Azerbaijani President Ilham Aliyev ceased military operations and resumed negotiations with Pashinyan. Within a few hours, Russian President Vladimir Putin brokered the peace agreement.

Aliyev, however, recognized that further military operations would risk thousands of civilians’ and soldiers’ lives on both sides, and likely earn Azerbaijan international pariah status. He instead agreed to a ceasefire whose terms secure virtually all of Azerbaijan’s political objectives  at no additional human or financial cost. Key among these is the return to Baku’s control of all seven Azerbaijani districts surrounding Nagorno Karabakh that Armenia has occupied since the early 1990s, in breach of four United Nations Security Council Resolutions. (Azerbaijan’s military had already regained four of these during the past six weeks, but the remaining three would have required treacherous mountain fighting.) Azerbaijanis displaced during fighting in the early 1990s will also be able to return to their former homes, while Azerbaijan maintained that Armenian residents can remain in their current homes.

Aliyev has also left open the possibility, at least on paper, that Nagorno Karabakh might eventually acquire a legal status other than part of Azerbaijan, meaning independence or officially joining Armenia. The mere prospect of these possibilities irks millions of Azerbaijanis; but it also provides Armenia a chance to save face.

Aliyev’s approach matches the war aims he has articulated since fighting resumed on September 27, namely, a peace agreement based on the “Basic Principles” of the Organization of Security and Cooperation in Europe’s Minsk Group, which mediates the conflict. These include:

Armenia and Azerbaijan preliminarily agreed to the Basic Principles in January 2009 but never finalized them. Last year, Pashinyan reversed course, announcing Armenia was replacing this “land for peace” formula with a new approach of “new wars for territories.” In the end, Azerbaijan’s battlefield victories, coupled with Putin’s intense political pressure, compelled Pashinyan to accept the Basic Principles in the form of the November 10 peace agreement. Tragically, this could have been achieved months ago, without any wartime deaths.

Russia, along with Turkey, are now filling a diplomatic vacuum in the South Caucasus left by the United States’ inactivity after serious military clashes between Azerbaijan and Armenia in July. Putin has convinced Aliyev to accept Russian peacekeepers on Azerbaijani territory to secure this peace agreement. This is a high price to pay, given the nefarious role of such troops in destabilizing frozen conflicts in Georgia and Moldova.

But the November 10 agreement also opens the way for Turkey to counterbalance Russia’s regional influence, as Ankara may participate in the peacekeeping operation. And with Armenia’s transit routes with Turkey, as well as Azerbaijan, set to reopen under the peace agreement, Turkey and Armenia may resurrect their 2009 agreement to normalize relations. This could open new opportunities for trade and investment that would catalyze economic growth and help citizens of Turkey, Armenia, and Azerbaijan build a prosperous and peaceful future together.

Matthew Bryza is a senior fellow with the Atlantic Council Global Energy Center. He served as a US diplomat for over two decades, including as US ambassador to Azerbaijan, deputy assistant secretary of state for European and Eurasian affairs, and as a former US mediator of the Nagorno Karabakh conflict.

Image: Men walk along graves of soldiers and civilians who were killed during a military conflict over the breakaway region of Nagorno-Karabakh, in Stepanakert, November 2, 2020. Vahram Baghdasaryan/Photolure via REUTERS