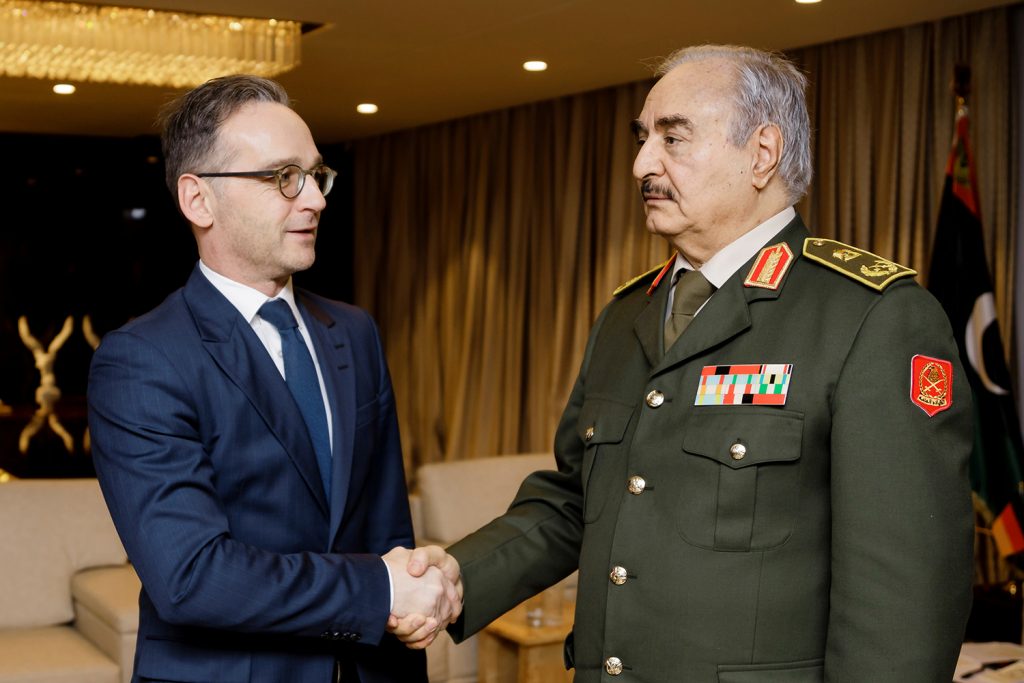 Throughout the continuously confusing Libyan crisis, the global community has consistently turned to its favorite tool to demonstrate progress towards a solution: an international conference. The fact that none of the half a dozen held so far have produced any tangible result seems to be no deterrent, especially within the upper echelons of the United Nations, which seems more interested in the process, rather than the results.

Originally, the German government put forward the idea of holding a conference in Berlin with the purpose of gathering all the international stakeholders to obtain a “real” commitment to respect the arms embargo and push each one’s proxies in Libya to accept the international community’s demands that all parties cease their military actions and return to the negotiating table. The statement that “there is no military solution, only a political one”—despite its complete incoherence with the facts on the ground—was repeated by all as a mantra with the hope that by repeating it hundreds of times it will become a reality. Obviously, this has not happened yet.

In the last few weeks much has changed both on the ground and in the international arena. The Libyan National Army (LNA) of Khalifa Haftar is making little progress on land due to its lack of manpower. The recent conquest of Sirte was due more to the betrayal of the Madkhali battalion stationed in the city than to success by Haftar’s troops. The arrival of hundreds of well-trained and well-armed Russian mercenaries has reinforced Haftar’s frontline in Tripoli as well as boosted the morale of the LNA rank and file. From the air, planes belonging to the countries supporting the LNA have kept up a constant bombing campaign against not only the frontlines but also civilian areas, with a particular predilection for targeting hospitals, ambulances, and schools. This targeting aims to break the morale of the citizens of Tripoli and diminish the strength of its defenders. But this has not happened yet—on the contrary, the resoluteness within Tripoli to resist the aggressor has grown massively.

The ensuing stalemate endured for months until Turkey responded to the pleas of the Government of National Accord (GNA) and its president Fayez Serraj to intervene militarily on its behalf. Turkish President Recep Tayyip Erdoğan’s support has jumpstarted the international community. All of a sudden US leadership has realized that the void it created by withdrawing from the area could be filled by others. The Europeans in general have woken up to their loss of prestige and relevance in an area literally at its borders. Italy in particular, after months of neglecting this issue, realized its own sudden irrelevance and jumped to its feet, randomly and hectically scrambling to regain some sort of a role. The Egyptians and the Emirati leaders, the main supporters of Haftar, reacted hysterically, aware that the eventual deployment of Turkish forces would make a victory by the LNA much more difficult and expensive, if not impossible.

In the midst of this melodrama, Russian President Vladimir Putin and Erdoğan now understand that the two of them could in effect play a determinant role in mediating between the Libyan factions and thus reaching an almost exclusive position of power in the North African country. From this stemmed the meeting in Moscow in mid-January where Serraj and Haftar were supposed to agree on a plan, beginning with the establishment of a ceasefire. To the surprise of most observers, while the GNA leader signed the agreement proposed by Erdoğan and Putin, Haftar refused to do so and left. The fact that Haftar rejected an agreement that was mostly in his favor, confirms that the commander of the LNA never had any intention to accept anything short of an unconditional surrender by Serraj and his followers that would make Haftar the sole ruler of the country.

At this point, one would expect the various international actors to realize that, contrary to their own mantra, Haftar has always believed that there is only a military solution. But this is not what is happening. Faced with Egyptian and the Emirati support for Haftar’s ambitions (and their own), many other countries started to believe that joining Haftar’s side would be more profitable than trying to combat it. The question for them is how to do so without massively losing face.

The Europeans, including the Italians despite their support for the GNA since its inception, found a solution in the Berlin conference. The meeting would provide the perfect stage for this ultimate act of betrayal: the acceptance by all of Haftar’s future role and the legitimization of his attack against Tripoli. This probably will not go as far as making him the leader of the country ex abrupto, since a softer way has been envisioned. There is already in fact a project in the pipeline to empower a new civilian government of “national unity” led by a new prime minister. Elections would be organized as soon as possible and if Haftar wins, all the better for the plan’s sponsors.

It is becoming evident that the Berlin conference could be a trap for the GNA, the courageous fighters of Tripoli, and the population of western Libya. All of this with the blessing of the United States.

Karim Mezran is a resident senior fellow at the Atlantic Council’s Rafik Hariri Center for the Middle East.

On April 4, 2019, troops led by Khalifa Haftar, a former general of Libyan leader Muammar Qaddafi who now contests the authority of the UN-sponsored Government of National Accord (GNA) seated in Tripoli, launched an attack against the Libyan capital. The real reasons for staging such an attack on that specific day are still unclear.

Haftar closes in on Tripoli: Where is the international community?

General Khalifa Haftar’s threat to advance his troops further into the capital of Tripoli proves that for the rebel Libyan commander, “there is only a military solution,” to the conflict between his forces and the United Nations-recognized Government of National Accord, according to Atlantic Council resident senior fellow Karim Mezran.

Another conference, another incomplete solution for Libya

Libya should be created by and for Libyans. There is no place for external interventions or conferences without full participation of all Libyans.