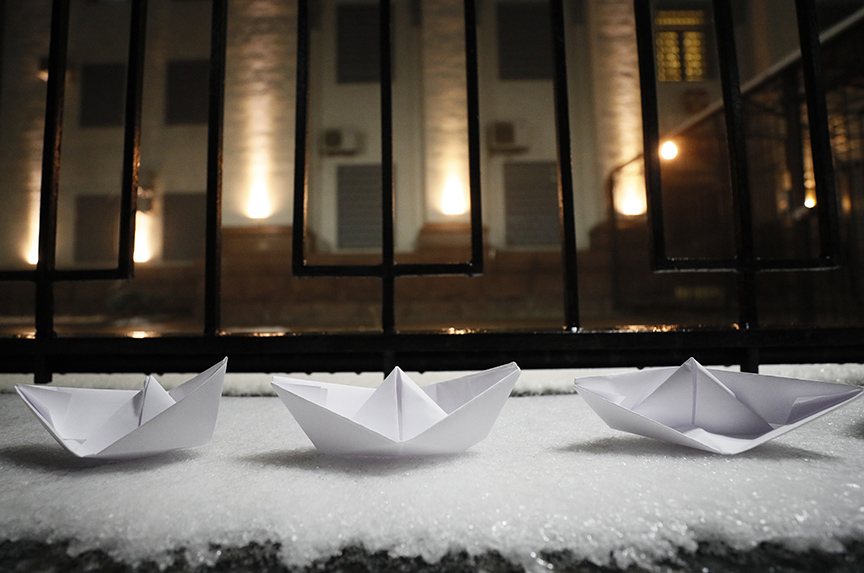 It’s Monday, which means that Russia is again antagonizing its neighbors to the west. But instead of little green men, Wagner “private” security forces, or Russian regulars acting under another flag, this time the FSB—Russia’s internal security service—openly fired upon and captured three Ukrainian naval vessels attempting to traverse the Kerch Strait that separates the two countries. This is a significant escalation by Moscow of tensions that have simmered for months as Russia has harassed legitimate and important Ukrainian trade ships that traverse the disputed strait to Ukrainian ports on the Sea of Azov. The chief dispute, of course, centers on Russia’s illegal invasion and annexation of Crimea in 2014 and its continued financing, training, and support to so-called separatists in Ukraine’s Donbas region, for which Moscow has been subject to broad sanctions imposed by the United States, the European Union, and the other G-7 nations.

Against that backdrop, many in the Russia watcher community have called for significant sanctions to be imposed on Russia to address this latest flagrant violation of international law. While sanctions may be useful to threaten Russia to rectify this situation, any imposition of them needs to be more strategically deployed—ideally with the EU—and lifted only for more strategic gains, vice resolution of this specific incident.

As I discussed in a recent issue brief, sanctions should be used with a clear outcome in mind. The Minsk Accords, which provide a path to end the conflict in the Donbas, were designed around specific, durable goals (e.g., restoration of Ukraine’s control over its border) linked to sanctions relief.

In this instance, the goal should be to force Russia to release all the Ukrainian vessels and sailors and reestablish free passage through the Kerch Strait and the Sea of Azov. The sanctions several have proposed would include designating one or more large Russian banks, which would freeze their assets and block most cross-border transactions, and major Russian oligarchs, which would snarl markets and hamper international trade, including for the United States, the EU, and broadly across the globe.

But game this out. Imposing those sanctions would come with massive spillover costs to the global economy while Russia could relatively easily meet the terms set out to remove sanctions levied specifically in response to this incident: release the ships and sailors and cease inspections in the Kerch Strait. But, critically, Russia could also easily cheat this arrangement merely by waiting a couple of weeks after the sanctions are removed and then resuming its targeted harassment. The Kremlin is well aware of how hard it would be to reimpose major economic sanctions over a subsequent minor provocation. After all, you can’t just yo-yo major financial and trading markets around with serious prohibitions on major economic operators.

Going smaller and more targeted with sanctions is similarly unadvisable. You could sanction the FSB again on the theory that the third time’s the charm, but that really wouldn’t have any practical impact. Designating the individual officers would also have minor effects, and little influence on the Kremlin.

US Sen. Bob Menendez (D-NJ) wisely took a different approach regarding sanctions in his statement on the incident on November 26. Instead of targeting sanctions against this incident, he urged the Congress to pass his bill, the Defending American Security from Kremlin Aggression Act of 2017 (DASKAA), which imposes certain new sanctions against Russia for its broad series of aggressions and sets out sanctions responses to future instances of Russian bad behavior.

This is the right approach: use sanctions to apply strategic pressure on Russia rather than focusing on a single event. In other words, don’t waste massive economic sanctions leverage on easily reversible actions by the Kremlin, especially when it can cheat so easily on any commitments in the future.

The State Department has informed Congress that it could not certify Russian compliance under the Chemical and Biological Weapons Control and Warfare Elimination Act of 1991 (CBW Act)—related to the poisoning of former Russian spy Sergei Skripal in the United Kingdom in March—but has yet to select the sanctions to be imposed on Russia under the CBW Act. This incident could certainly argue for more significant sanctions than the Trump administration has thus far considered as a way to increase US leverage vis-à-vis Russia.

Finally, and most dramatically, perhaps this overt Russian aggression against Ukraine suggests something else entirely. Namely that Russian intransigence and continued aggression has functionally killed the Minsk Accords and that a new agreement, forged with leverage of harsher escalatory sanctions, is needed to finally resolve the war that has simmered in eastern Ukraine for more than four years. This version of the Minsk Accords was agreed under the threat of a significant escalation in US and EU sanctions pressure in the fall of 2014. While they provide a roadmap to de-escalation, it is clear that Russia does not intend to live up to its commitments under the status quo; conversely, Russia appears happy to bleed Ukraine dry via a thousand small cuts like this latest confrontation.

A new deal will certainly be difficult to achieve—and the United States and the EU will need to help ensure Kyiv sticks to the general principles in the Minsk Accords to avoid giving Moscow excuses to increase violence in the Donbas—but those tough negotiations may be preferable to keeping a deal on life support that has little chance to finally bring peace to eastern Ukraine.

Whatever route the United States and the EU choose, however, they should bear in mind the need to keep sanctions leverage focused on achieving more strategic and verifiable goals than are presented by this Russian attack on Ukrainian naval vessels in the Kerch Strait. Sanctions are a valuable resource when dealing with Russian aggression, but not every incident is a nail ripe for the sanctions hammer. Policymakers would be wise to consider other options to deal with this specific crisis and save the sanctions tool for broader objectives.

Image: Paper boats are lined up during a protest against the seizure by Russian special forces of three Ukrainian naval vessels, which Russia blocked from passing through the Kerch Strait into the Sea of Azov, in front of the Russian Embassy in Kyiv, Ukraine, on November 25, 2018. (Reuters)