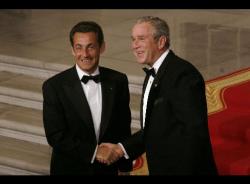 Bush administration officials have been engaged in a quiet debate about how eagerly to seize a chance to improve French-U.S. relations during President Nicolas Sarkozy’s Washington visit, which started yesterday.

The go-slow crowd says that French public opinion is so anti-Bush that overreaching will only backfire. Another faction, which warns that historic windows open and close quickly, argues for a move now to provide reinforcement for Sarkozy’s pro-U.S. course.

Count me in the seize-the-moment crowd, realizing Sarkozy has gone farther out on a limb in favor of Atlantic links than any French leader since the early days of Charles de Gaulle. Sarkozy’s policies since taking power in May have included a more helpful approach to Iraq, a tougher line against Iran’s nuclear program, and moves toward a deeper NATO relationship.

My suggestion for this week: President George W. Bush should offer Sarkozy NATO’s coveted Southern Command. Such a move could be made official at the NATO Bucharest Summit in April. But Bush could tell Sarkozy in private that the U.S. will drop objections to a French officer taking over Southern Command leadership, long the province of U.S. admirals. In exchange, France could rejoin the alliance’s military command structure for the first time in 40 years. It is an offer Sarkozy has signaled he would consider.

Such an agreement would mark one of the most important strategic accomplishments of the Bush presidency — a revolution in French foreign policy that transforms the trans-Atlantic relationship into something more robust and useful. With the alliance under a test in Afghanistan that it may well fail, better U.S. relations with France couldn’t come at a more timely moment.

The Southern Command was Sarkozy predecessor Jacques Chirac’s price in 1996 for reintegrating France into NATO. President Bill Clinton made a mistake then in turning down the French, partly because no one wanted to give Camembert-eaters the legendary U.S. Sixth Fleet — which would in any case fall under French command only in case of NATO involvement in hostilities.

The Bush administration has compelling reasons to make the pitch now, in part because it offers — if nothing else — a shot at building a legacy.

Nothing has held back the effectiveness of U.S.-European military cooperation more than France’s foot-dragging as a strategic partner. And nothing will be needed more than Atlantic unity in a complex world of declining relative U.S. and European weight.

The Sarkozy-led French have plenty of reason to say yes. Sarkozy understands what many French leaders have denied before him: their nation will become a second-rate global power if it can’t find ways to work with its natural ally.

Second, he’s likely to get more for his willingness to rejoin NATO from a troubled Bush than he might from a Bush successor.

Both parties understand that Sarkozy’s room for maneuvering may not last long. The French Socialists may regroup, French bureaucrats who have been weaned on anti-Americanism might flex their muscles or events could set things awry. Watching Sarkozy’s frenetic pace of new ideas and initiatives raises the prospect of unexpected roadblocks that might throw off such bold moves.

Such a generous U.S. offer would merely be following on ground laid by the French. Both Sarkozy and his defense minister, Herve Morin, have spoken of ending four decades of French isolation from the U.S.-dominated military command. The first concrete step in that direction was a French government document sent to NATO headquarters in Brussels proposing four ways of sharing information and strategic thinking between the alliance and the European Union on defense and foreign policy.

In written proposals to NATO, France suggested that the EU high representative for foreign affairs should regularly brief the NATO Atlantic Council, the group of ambassadors that is its standing decision-making body. They suggested the Secretary General of NATO should also be invited to appear before EU foreign ministers.

France wants new procedures to exchange information between NATO and EU crisis and disaster coordination agencies. The ideas seem technical, but they are novel as they go to the heart of perhaps the worst Atlantic security problem: the lack of EU-NATO high-end coordination that would improve the West’s chances in engagements such as the effort to stabilize Afghanistan.

Where the U.S. must be wary is to avoid French conditions that might do more to constrain NATO than prepare it for the future. The French have consistently frowned on NATO’s intended global role, blocking the addition of countries such as Japan, Australia and South Korea while limiting the definition of its mission to terror, energy and reconstruction.

Yet even here a deal can be had: France would reconcile itself to NATO’s enhanced and necessary broader role, for which it would take on some of the more important commands, and the U.S. would lift any remaining objections to the expansion of Europe’s capabilities.

It is all so logical that it is hard to believe it could happen. But Bush in this case should cast off the go-slow advice of the gradualists and follow his natural inclination for bold steps.