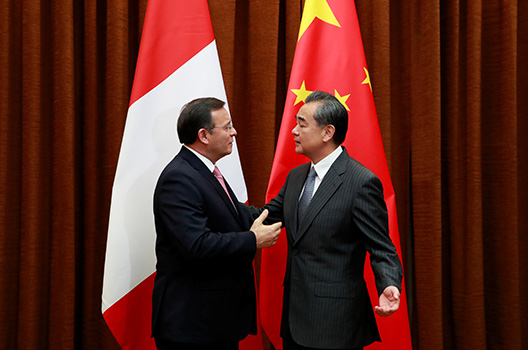 Peruvian Foreign Minister Nestor Popolizio (L) is greeted by his Chinese counterpart Wang Yi at the Ministry of Foreign Affairs in Beijing, China, 28 August 2018. (How Hwee Young/Pool via REUTERS)

The US-China trade dispute has put Latin America in a bind. While the tit-for-tat feud between the world’s two largest economies has had global repercussions, Latin America finds itself torn between its long-standing, traditional North American partner and a relatively new Asian investor.

As the United States and China compete for global economic dominance, Latin America must engage China for short-term trade opportunities without jeopardizing its drive toward long-term, sustainable economic growth and diversification. It must also preserve important ties to the United States and North America, which provide the region with crucial economic, diplomatic, and security support.

The feud between the United States and China has, however, provided some short-term benefits for Latin America. Latin American exporters have stepped in to fill supply gaps caused by Chinese tariffs on US goods.

In 2016, the United States exported $14.2 billion in soybeans to China, accounting for nearly two-thirds of total US soybean exports. After China imposed a 25 percent tariff on US soybeans in July 2018, soybean exports from Brazil and Argentina to China soared. Premiums on Brazil soybeans have increased by nearly 75 percent since May as China, the largest importer of soybeans with nearly 60 percent of global demand, scrambles to sustain the world’s largest population and a growing middle class.

Latin American exporters can secure short-term profits as commodity prices rise in response to the US-China trade dispute. But too much dependence on raw materials for long-term economic growth will prove unsustainable for a region that has historically suffered from the boom-and-bust cycle of commodity prices.

Chile and Peru, the world’s largest and second-largest copper exporters, respectively, have recently been hit by price volatility as key market players grapple with uncertainty created by the trade dispute. Copper prices peaked in early June before falling in mid-August more than 20 percent to a thirteen-month low.

But even as some Latin American countries navigate potential upsides in shifting markets and global supply chains, questions loom regarding the future of its commercial relations with the United States.

Deep in the new United States-Mexico-Canada Agreement, the United States included an important clause that can have reverberations beyond North American trade. The “China clause” states that any North American country entering into trade talks with a “nonmarket economy” must provide a three-month notice to the other partners. If trade talks materialize into a formal trade agreement, the other partners have the right to expel the country from the new North American treaty. With this provision, Washington is sending a clear message to all commercial partners: us or China, but not both.

For Latin American nations, many of which have seen an influx of Chinese capital in the form of loans and investments, the defensive provision is a test of loyalty. Will US President Donald J. Trump attempt to include a “China clause” in existing or new trade deals? More than half of the United States’ free-trade agreements are with Latin American countries. Any attempt by Washington to counter China’s growing influence by upending these trade deals must weigh the risks of alienating key hemispheric alliances, which have yielded mutual benefits in market access, diplomatic relations, and security cooperation.

The losses for Latin America would be incalculable. Not only would the region lose access for its exports to the world’s second-largest market, but the move could potentially sever longstanding economic and diplomatic relations, and much-needed cooperation in security and development, especially for crisis-ridden nations in Central America. The result could be that Latin America turns to even deeper economic relations with China, but with less leverage to demand more transparent, democratic, and environmentally-conscious ties. A case of particular concern is Venezuela, where China has helped to sustain a financial lifeline to President Nicolás Maduro’s authoritarian government.

In this unique moment in the global economy and US-China trade relations, Latin America is at an inflection point. The path toward global competitiveness and sustainable economic growth will depend largely on the region’s ability to diversify its economy by leveraging its resources, geography, and economic ties with both the United States and China.

As it draws close to China, Latin America must seek trade and investment deals that increase its capacity to withstand shocks from global economic downturns and geopolitical pressures from growing frictions in US-China relations.

Most importantly, the region must find a balance between the two powers to secure a prosperous future for citizens across Latin America.

The Atlantic Council’s Adrienne Arsht Latin America Center focuses on the region’s strategic role in a global context. The Think Five Blog Series, launched to mark its five-year anniversary, reflects on major transformations set to redefine the trajectory of the region now and in the years ahead.