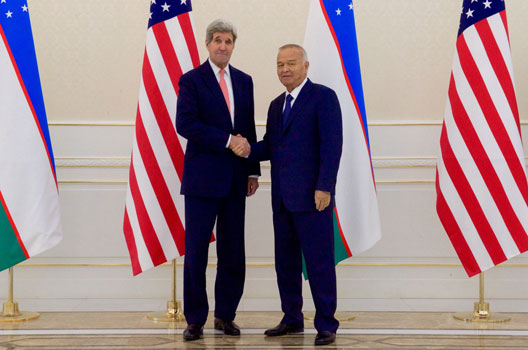 From left: US Secretary of State John Kerry shakes hands with Uzbekistan President Islam Karimov at the President’s Residential Compound in Samarkand, Uzbekistan, on November 1, 2015, after Kerry arrived for a bilateral meeting and broader group discussion with all five Central Asian nations. (Wikimedia)

It was little noticed, but something of real significance took place in Washington during the first week of August. US Secretary of State John Kerry hosted the Foreign Ministers of five Central Asian nations that emerged from the dissolution of the Soviet Union: Kazakhstan, Kyrgyzstan, Tajikistan, Turkmenistan and Uzbekistan. With the US largely out of the war in Afghanistan, Central Asia receives little attention from the American media or public. But, this region sits at the very center of the Eurasian land mass, bordered by Russia, China, and Iran and near India and Pakistan. Stability in Central Asia is critical for stability throughout Eurasia.

Kerry’s meeting on August 3 in Washington with Foreign Ministers Abdyldayev representing Kyrgzstan, Aslov of Tajikistan, Idrissov of Kazakhstan, Komilov of Uzbekistan, and Meredov of Turkmenistan is the second convening of this group. The first occurred in the fall of 2015 in the fabled city of Samarkand during Kerry’s first trip to Central Asia. The group—known as the C5+1—is the brainchild of Necia Desai Biswal, assistant secretary of state for South and Central Asian affairs.  The group is a vehicle that promotes US cooperation with the five Central Asian states and cooperation among the states themselves.

The Global Counterterrorism Forum will address challenges associated with Islamic extremism in Central Asia, which played a part in Tajikistan’s civil war in the 1990’s and has posed problems for in Uzbekistan, Kyrgyzstan and, lately, in Kazakhstan. This is an issue that all governments face in the region and where cooperation should feasibly develop.

The Central Asian Business Competitiveness project is designed to promote exports from the Central Asian countries. Given the vested interests in all five countries, the challenge for this project will be persuading the respective regional governments to adopt policies that make it easier to export goods.

The Transport Corridor Development project is designed to make it easier, faster, and cheaper to move goods among the Central Asian nations. This project could be the most important of the five. Trade among the Central Asian states—like trade within the Arab world—is much less than it could and should be.  Removing non-tariff trade barriers within the region would greatly improve the movement of goods, and increase trade within the region to the benefit of all.

The Power the Future project will focus on renewable energy. The region depends heavily on gas, oil, and hydroelectric power. Water scarcity in arid Central Asia has made the construction dams and the winter release of water from dams controversial matters. Developing renewable energy and enhancing energy efficiency is a way of tackling energy issues that both the upstream and downstream states of the region can embrace.

Finally, the Supporting National and Regional Adaptation Planning initiative will help the Central Asian states to increase their planning capacity for the effects of climate change. By exchanging data in tandem with conducting measurements, this project should facilitate regional approaches for managing the challenges of climate change.

These five projects are modest in scope. The Central Asian states do not have a strong record of inter-regional cooperation. Washington correctly understands that enhancing such cooperation, especially in security and economic matters, will promote stability and prosperity. These initiatives are designed to find something politically easy to do, while still providing a visible payoff. If these modest proposals succeed, doors to more ambitious possibilities will open. It is very much in the interests of the United States that the Central Asian nations become stronger and more prosperous.

Instability in the region would be an invitation for one or more of its great power neighbors to intervene.  A contest for hegemony in the middle of Eurasia would create serious tensions in Central Asia with ripple effects well beyond the region.

These initiatives also serve two other purposes.  For the Central Asian nations, they are a vehicle that ensures high level American attention to Central Asia—at least periodically. All the leaders in the region welcome this attention. They see American engagement as a partial offset to the much heavier presence of Moscow and Beijing. This is perhaps especially true now that Russian President Vladimir Putin has partly dismembered both Georgia and Ukraine, declared a right to intervene anywhere on behalf of ethnic Russians and Russian speakers, and publicly labeled Kazakhstan an artificial country.

Finally, for the US, these projects provide an agenda for multilateral engagement in the region. Moscow has set up a variety of organizations for this purpose. China established the Shanghai Cooperation Organization, which includes Russia, to this end.

C5+1 is Washington’s late and modest bid in the game. It’s nothing large, but it’s still a start to enhancing US influence in the middle of Eurasia.