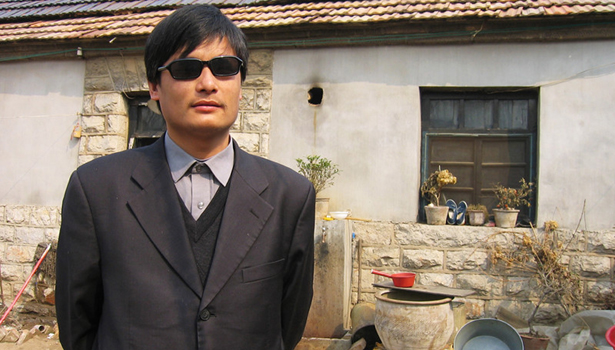 Chen Guangcheng, the blind Chinese anti-abortion activist whose daring escape from house arrest set off a diplomatic brouhaha that grabbed the world’s attention, is about to get his wish to come to America. He didn’t make it easy.

The good news broke earlier this morning, US time. Under the headline “US expects dissident Chen Guangcheng to leave China soon,” BBC reports:

The US says it expects China to allow prominent dissident Chen Guangcheng to travel abroad soon.

The US state department said Mr Chen had been offered a fellowship at an American university, and it would allow his wife and children to accompany him. Earlier, Beijing said the blind activist could apply to study abroad – paving the way for a resolution to a tense diplomatic stand-off with the US.

Mr Chen fled house arrest last month and spent six days in the US embassy. He left but now says he wants to go to the US with his family.

“Mr Chen has been offered a fellowship from an American university, where he can be accompanied by his wife and two children,” US State Department spokeswoman Victoria Nuland said in a statement. She said the US expected Beijing to process their application for travel documents “expeditiously”. “The United States government would then give visa requests for him and his immediate family priority attention,” the statement added.

In her first public comments on the dissident Chen Guangcheng since arriving in China, Secretary of State Hillary Rodham Clinton said on Friday that she was encouraged by “progress” in a diplomatic crisis that has deeply embarrassed the White House and threatens to sour relations with Beijing, but that more work needed to be done.

Speaking at a news conference at the end of two days of economic and security talks that have been overshadowed by Mr. Chen’s case, Mrs. Clinton said she was encouraged by a statement earlier on Friday from China’s Foreign Ministry that said Mr. Chen could apply to study outside China. The proposal appeared to offer the possibility of a breakthrough in the crisis.

Mrs. Clinton said that progress had been made “to help him have the future that he wants” and referred to the ministry’s statement as well as a visit by American Embassy staff and an American doctor to Mr. Chen in a Beijing hospital on Friday, the first time they were able to see him in person since late Wednesday. “But there is more work to do, so we will stay engaged as this moves forward,” she said.

In the two-sentence statement posted on the ministry’s Web site, a spokesman, Liu Weimin, stated that should Mr. Chen wish to study abroad, as more than 300,000 Chinese students do, he “can apply through normal channels to the relevant departments in accordance with the law, just like any other Chinese citizen.” Speaking later at a news briefing, Mr. Liu said he was certain that “competent Chinese authorities will handle his application in accordance with the law.”

In addition to genuine concern over Chen’s safety and fear that the incident would overshadow important bilateral diplomatic and economic negotiations, the Obama administration’s handling of the case has come under scrutiny. Former Massachusetts governor Mitt Romney, President Obama’s presumptive opponent in this fall’s election, issued a blistering statement yesterday, before today’s welcome development. LAT (“Romney: Chen Guangcheng case marks a ‘day of shame’ for Obama“):

“The reports are, if they’re accurate, that our administration, willingly or unwittingly, communicated to Chen an implicit threat, to his family, and also probably sped up, or may have sped up the process of his decision to leave the embassy because they wanted to move on to a series of discussions that [Treasury Secretary Timothy] Geithner and our secretary of State are planning on having with China,” Romney said, making an accusation that was immediately repudiated by White House officials.

“It’s also apparent, according to these reports if they’re accurate, that our embassy failed to put in place the kind of verifiable measures that would assure the safety of Mr. Chen and his family,” Romney said. “If these reports are true, this is a dark day for freedom and it’s a day of shame for the Obama administration. We are a place of freedom, here and around the world, and we should stand up and defend freedom wherever it is under attack.”

White House officials said the reports were not accurate and that Chen was never under any pressure to leave the embassy. And as long as he was there, the White House press secretary said, Chen never asked for asylum.

Jerome Cohen, a well known China legal scholar (and former WRM colleague at the Council on Foreign Relations) gives a version of events that supports State Department claims that Chen left the embassy voluntarily, was not pressured by US officials, and accepted the negotiated agreement with the intention of staying in China.  Cohen, who was involved in the discussions at Chen’s request, is well respected — and not just by those who, like me, have known him and his work for many years. According to Cohen, the deal originally accepted by Chen was modeled on an arrangement made by the famous dissident Ai Weiwei which has allowed Ai to stay in the country and participate, carefully, in political and cultural life.

The Ai deal was seen by Cohen and others as part of an incremental strategy to open the doors to wider public freedom in China. On the one hand, many in the government do not want the international obloquy that comes with harsh repression; on the other, many dissidents want to live at home rather than in exile. A little flexibility on both sides, and arrangements can be made.

This seems to be what the embassy staff and Chen’s advisers like Cohen were working toward, and on the (admittedly skimpy and conflicting) evidence now available, it looks like an arrangement of this kind was roughly hammered out, and Chen accepted it.

Why the change of heart? We don’t really know, but those who have never spent time in dictatorial countries can have little conception of just how harsh and brutal their police authorities can be, and how good they are at threatening and browbeating those whom they wish to control.

My own very limited encounters with those systems suggest a possible scenario: at some point one or more internal police officials either got to his wife or got to Chen after he’d left the embassy and told him in the most bloodcurdling and alarming way that he was under threat, that they would be watching and waiting, and that his wife and family would meet very unpleasant fates once the security forces got him back out of Beijing. And they would have told him in a very chilling way that he was not to tell anyone about this little conversation.

The liberal do-gooding Foreign Ministry types here in Beijing, the security officials would have told Chen and his wife, talk very pretty, but once you get out of the glare of the television lights, you will be ours again. Out there in the provinces, nobody hears you when you scream.

After that kind of talk, a weary and blind man, much more worried about the safety of his family than about anything that would happen to him, might well change his mind about staying in China — and might also need to give a good reason for the change of mind without mentioning any recent encounters with the security forces. This is a completely speculative theory with no evidence, and other explanations are possible. But it fits the known facts.

Max Fisher, editor of the International channel at The Atlantic (and, full disclosure, editor of occasional pieces I submit there) notes in an posting titled “The Geopolitics of Helping a Confused, Frightened, Blind Man in Beijing” that Chen was his own worst enemy. Writing just hours before news of Chen’s possible release broke, Fisher explains,

Throughout this episode, Chen has shown two consistent traits that don’t seem to be helping him: an odd optimism about his situation, no matter how dire it gets; and a politically insensitive willingness to say whatever he thinks. His requests to fly to America on Hillary Clinton’s plane, or to travel freely to a from the U.S. embassy building, show that he may not fully grasp the gravity of his situation. His comments first thanking U.S. embassy officials, then chiding them, then insisting it had been a “misunderstanding” are probably not going to deter those officials from helping him. But the same political insensitivity toward the Chinese government — which is never thrilled to hear dissidents insisting that they be allowed to leave for the U.S., or accusing the state of violating their rights — could risk some of the unusual goodwill China has shown. The deal that China agreed to for Chen is, by China’s extremely low standards, surprisingly not bad. Within the Chinese government, some hard-line officials would probably like to see Chen thrown back under house arrest, and the activist is unwittingly helping those officials build their case.

Chen’s sudden urgency about leaving China could be due in part to his claims that U.S. embassy officials are no longer answering his phone calls, and that the officials did not stay with him at the Beijing hospital overnight as promised. The U.S. embassy appears to be doing what it can to keep up with Chen’s shifting requests. When he was in the embassy, he wanted to stay in China, and they negotiated an imperfect — he will not be totally free, and it’s possible Chinese authorities could renege on their promises — but still landmark deal for him to stay. Now that he’s out, he says he wants to travel to the U.S., and though it’s very difficult to see a way for the embassy to pull this off, officials say they’re doing their best to negotiate with Chinese authorities.

At this point, the U.S. may be at or near the limits of its power to help Chen. China is a powerful and sovereign country, and one particularly unwelcome to Western dictates. Its treatment of dissident activists is among the worst in the world, but the U.S. has somehow managed to secure a deal that, although it has little way of guaranteeing Chinese state cooperation, is far better than years of house arrest. Chen seems surprised and disappointed that the U.S. did not live up to his lofty sense of American power and ideals.

Somehow, in a country that drills into would-be activists that they should abandon hope and shut their mouths, Chen is still optimistic and still determined to speak his mind. Those traits may have made him a great activist in a country that badly needs them. But they are not helping him navigate the great-power politics that he’s been thrust into. He is stuck between the two most powerful states in the world, stuck in the middle of a much larger U.S.-China conversation about human rights that has been running since President Clinton reopened the relationship in the mid-1990s. He has to figure out how to navigate all of this as a blind idealist from rural China, sitting in a Beijing hospital and worrying about his family’s safety. Of all the many challenges he’s faced in his life, this may be the biggest.

Fortunately for Chen, he managed to capture the attention of much of the world and, one presumes, the Chinese government was just as anxious to get this mess out of the news as the Obama administration. Had Chen’s story not become an international sensation, however, he might well have suffered a very different fate, indeed.