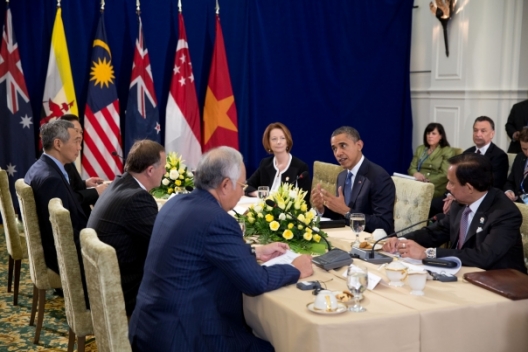 To answer Hugh White’s initial question, ‘what is America’s ultimate aim in Asia today?’, there is no mystery about American aims in Asia: it is simply a rules-based order with unimpeded access to the global commons.

To the degree that other stakeholders are willing and able to help enforce such a system, they are welcome as partners. The question we posed remains unanswered. Parity does not tell us what regional order China would like to preside over.

No less importantly, Hugh leaves out the rest of Asia, which, as is obvious, has reacted to China’s new assertiveness by hedging their bets and bandwagoning with the US and, increasingly, with each other. This is a profound testimony to the region’s reluctance to accept the implications of China’s self-defined new role – as suggested by the former foreign minister Yang Jiechi’s remarks at the 2010 ARF meeting in Hanoi.

It is not parity that China is pursuing so much as irredentism. If we follow Hugh’s logic, the United States should accept whatever sort of 21st century neo-tributary system or version of an Asian ‘Monroe Doctrine’ China seeks. This is unlikely to be a basis for a new order of peace and stability. And certainly, the worst fear of most actors in Asia is being forced to choose between the United States and China.

Moreover, Hugh is simply wrong in saying US policy is containment. Counterbalancing is very different than containment. In fact, the United States, ever since Deng Xiaoping opened China’s economy, has been instrumental in facilitating China’s remarkable economic transformation, as one of its largest trading partners, investors and, now, debtors. These are the foundations of China’s comprehensive national power. How is this containment?

Hugh has a point when he says that the emphasis is on primus more than inter pares. But that is a reflection of reality: the US economy is twice the size of China’s and its technological base and military capacity also dwarfs China’s. But the process of redistributing power is clearly underway both regionally and globally. The rise of the G20 is a good example of this, and the East Asia Summit allows heads of state to meet as equals. US active participation in Asia’s evolving multilateral institutions reflects an evolving adjustment to the diffusion of power. And it must be said that China and other emerging economies continue to free ride on the international system far more than they act as stewards of it.

To be sure, China seeks a larger voice in shaping rules.And this is happening, though one could argue about the pace and scope. But in areas where new rules are urgently needed to be written for governance, such as cyberspace and outer space,it is less a question of ‘sharing power’ than pooling resources. But to do so a nation must see itself as a steward of the global and regional order, one that those in the Indo-Pacific see as mutually beneficial and preferable to any alternative being offered. So far, in Asia, China behaves more like a bully with a chip on its shoulder.