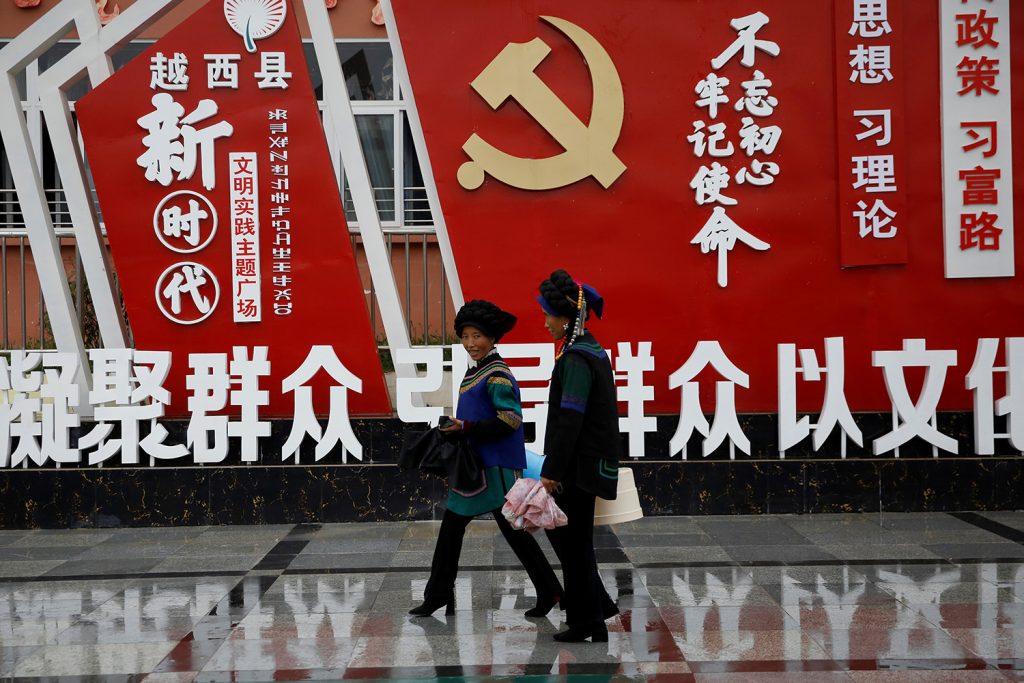 Throughout the history of the Peoples Republic of China, five-year plans have promised a bright economic future under the Chinese Communist Party (CCP), and the fourteenth of those blueprints, whose guiding communique was released last week, was no different. But amid the CCP Central Committee’s paeans to General Secretary Xi Jinping and a laundry list of expected reforms and goals to be reached by 2025, the plan contains a note of uncertainty about an era that looks to be dominated by competition with the United States over advanced technology.

The blueprint—details to be released leading up to approval by China’s rubber-stamp legislature next March—offers a statement of purpose for the world’s second-largest economy as it grows to paramount status. Among its many aspirations, the plan enshrines as a party nostrum the idea of “dual circulation” in which a cycle of internal consumption and productivity growth is to be balanced against an international cycle of trade and foreign investment. In reality, this is just old wine in new bottles, as China’s technocrats—with encouragement from the International Monetary Fund—have spent the past fifteen years trying to rebalance external and domestic demand as drivers of growth.

But it is high tech—and the Trump administration’s efforts to block China’s access to it—that appears to preoccupy the Chinese leadership. At a moment in which China’s access to advanced semiconductors and chip-making technology is being squeezed, it is noteworthy that before addressing national security and military spending, the Central Committee declares that “technological independence and self-reliance should be the strategic support of the country’s development.”

Beijing elaborated on that target a few days later by releasing a Xi Jinping speech delivered in April that called for China to establish “independent, safe, and controllable” supply chains that would “create a necessary industrial backup system.” In other words, two can play at the decoupling game.

The five-year plan document avoids mentioning the United States by name. But the keynote speech that Xi delivered during the Central Committee meeting—also released afterwards—highlighted “changes in the global political and economic environment, the upsurge in deglobalization, unilateralism, and protectionism by a certain country.”

Clearly, Beijing has set the goal of technological independence regardless of who occupies the White House in the coming years and what policies they pursue vis a vis China. Indeed, the CCP’s vision for the country is noteworthy in that it looks a decade beyond the plan’s 2025 endpoint, which suggests that Xi—who has abolished the term limit that would have required his retirement in 2022—plans to remain at the helm at least until he turns eighty-two in 2035.

The Central Committee is careful not to define which technologies will be emphasized over the next five years and what precisely it hopes to achieve. Some of this will come later as various ministries elaborate on the plan. But this opaqueness also may be a measure of how much US actions have hindered Beijing’s efforts to develop various industries, which were described in great detail in the previously released “Made in China 2025” initiative. That project’s emphasis on semiconductors certainly influenced Washington’s reaction. There is uncertainty in Beijing about how to move forward with cutting-edge technologies now that the United States is working so assiduously to cut off its access to them. The country is devoting huge sums to developing a competitive semiconductor industry, but many of the efforts are showing limited results and billions of government funding may end up wasted.

This underlines the incongruity of a state-driven plan for a multi-trillion-dollar economy whose dynamism over forty years of rapid growth has come in large part from the private sector, which is not mentioned once in the 4,000-plus word document (nor is the real estate sector, which represents up to one-quarter of China’s gross domestic product). Private businesses have been an essential element of China’s economic success, and employ substantially more workers than state-owned enterprises, whose share of employment is below 15 percent of the workforce. Yet state-owned enterprises have access to bank loans and other preferential treatment from the government, even when they fall into financial difficulty. The fourteenth Five-Year Plan barely mentions the many areas in which reforms could change this equation, including fiscal policy, financial sector regulation, and China’s legal framework.

This gap between state-owned haves and private sector have-nots is mirrored across Chinese society. While China has made great progress reducing poverty, especially in the countryside, many contradictions remain between the wealthy and the less well off. The new plan expounds upon the benefits that China’s rising prosperity will bring to all of its citizens. But China still has some of the widest income disparities in Asia, as measured by the Gini coefficient, and that inequality is reflected in access to education, medical care, financial services, and housing. Bridging those gaps—just like attempting to catch up in technology—will require more than rhetoric that may prove out of tune with 21st century reality.

International investors have also been attracted to China’s domestic Renminbi (RMB)-denominated bond markets, estimated to raise their holdings to 3 trillion yuan ($448 billion) —a 50 percent increase which is quite impressive during the pandemic crisis. Growing confidence in Chinese sovereign debt shows decoupling is a long way off.