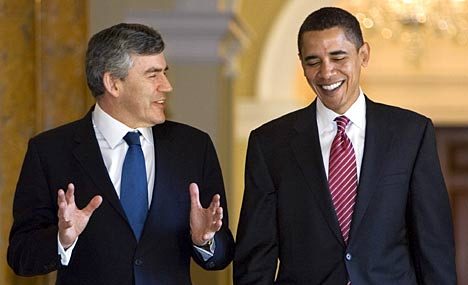 Hillary Clinton, John McCain and Barack Obama were all that Europeans wanted to talk about in the hallways and at the dinners of the annual Munich Conference on Security Policy over the weekend.

On the sidelines of podium speeches about the need to contain Iran, stabilize Afghanistan and manage Russia, the buzz was mostly about the three leading U.S. presidential candidates. Europeans grouse that they can’t vote in U.S. elections, but must live with the consequences.

The surprise in my unscientific survey of these defense- policy wonks, from cabinet ministers to professors, is that Obama is their runaway favorite. This is the case even though Obama, unlike McCain and Clinton, has never spoken here, and few here know what his foreign policies might be.

Perhaps that’s the point: Europeans want U.S. change even more than most Americans — and his candidacy offers more of it.

Most Europeans tend to favor Democrats, but never has their dislike for Republicans been as great as it is for George W. Bush. Reasons include his early dismissal of their climate- change concerns (since altered), his disregard for multilateral diplomacy on Iraq and other issues (since revised), and his Texas drawl and swagger (well, you can’t change everything).

Yet Bush served as a useful distraction from Europe’s own foreign-policy failings. They will come more into focus in 2009 and may make short a honeymoon with any new U.S. leader.

In the seven years of the Bush presidency, Europeans have grown little better at reaching unified foreign-policy positions. They continue to spend too little to defend themselves or project security elsewhere, and they haven’t addressed their most serious challenges, from Islamist extremism to Russia’s muscular and assertive energy policy.

Thus Senator Joe Lieberman, who led the U.S. delegation in Munich, felt compelled after U.S. Defense Secretary Robert Gates’s keynote speech to emphasize that all the presidential candidates would press Europeans to do more fighting and dying in Afghanistan or risk NATO’s decay. That followed carping by German members of parliament displeased with Gates for a leaked letter pleading with allies to do more in the restive Afghan south.

What bubbles underneath such mutual recriminations is an emerging hope that the next U.S. president might start a new conversation about how to renew and reshape Atlanticism through inspirational American leadership.

That’s what lies behind the Obama preference. European policy insiders are uneasy about McCain, a conference regular who is blunt about Europe’s need to improve its game. They also are cool about Clinton, though her husband was a huge hit in Europe.

McCain at the last moment canceled his participation in the conference last weekend for the first time in years. (He first came as a U.S. Navy captain accompanying Senator John Tower.) Yet Europeans who know him best kibitzed about McCain’s resurrection from near-dead candidate to near-certain nominee, and what it would mean to have someone in the White House who knows them perhaps too well.

No one has talked tougher in Munich about standing up to a resurgent Russia. On Iran, McCain has told the conference that the only thing more dangerous than military action against that country would be living with its nuclear-weapons capability.

“He would continue this confrontational attitude of America toward the world, and he would get us in fights with the Russians that would be counterproductive,” says Admiral Ulrich Weisser, the former chief of planning in the German Defense Ministry. “Obama represents the change and leadership we need.”

The Munich Abendzeitung newspaper ran the following headline over a report on a dinner thrown in Munich by lawyer Wolfgang Seybold for local elites and American members of Congress and military leaders: “Obama Leads at VIP Dinner.”

That said, some Europeans are warming to McCain as they learn about the policies that have made him persona non grata with the Republican far right: his opposition to torturing war detainees, his concerns about climate change, his unwillingness to make issues such as same-sex marriage and abortion central to his campaign.

That said, he will challenge Europeans to reconsider ingrained views on Iraq. South Carolina Senator Lindsey Graham, who replaced McCain as the ranking Republican on the trip, said, “If the troop surge in Iraq had failed, McCain would be dead as a candidate.” He tells Europeans that McCain’s candidacy will shift the election’s security debate, pitching a man who stood on principle for an unpopular Iraq policy against Democrats whose policies may be judged as politically expedient.

Whoever wins, what no one debates is that Europeans and their media have never paid this much attention to American primary elections.

That’s driven by Bush fatigue, expectations for warmer U.S.-European relations and the gripping theater of the race.

“What characters you have,” says Bavarian Television Editor-in-Chief Sigmund Gottlieb at the Seybold party. “There’s the ambitious American woman with the charming former president behind her, the young black full of dreams and the former Vietnam hero and war prisoner. It’s better than Hollywood.”

Think of it as the ultimate American reality show with a drama dripping with global consequences.

Frederick Kempe is president and CEO of the Atlantic Council.  Originally published 14 February 2008 by  Bloomberg News. Reprinted with permission.