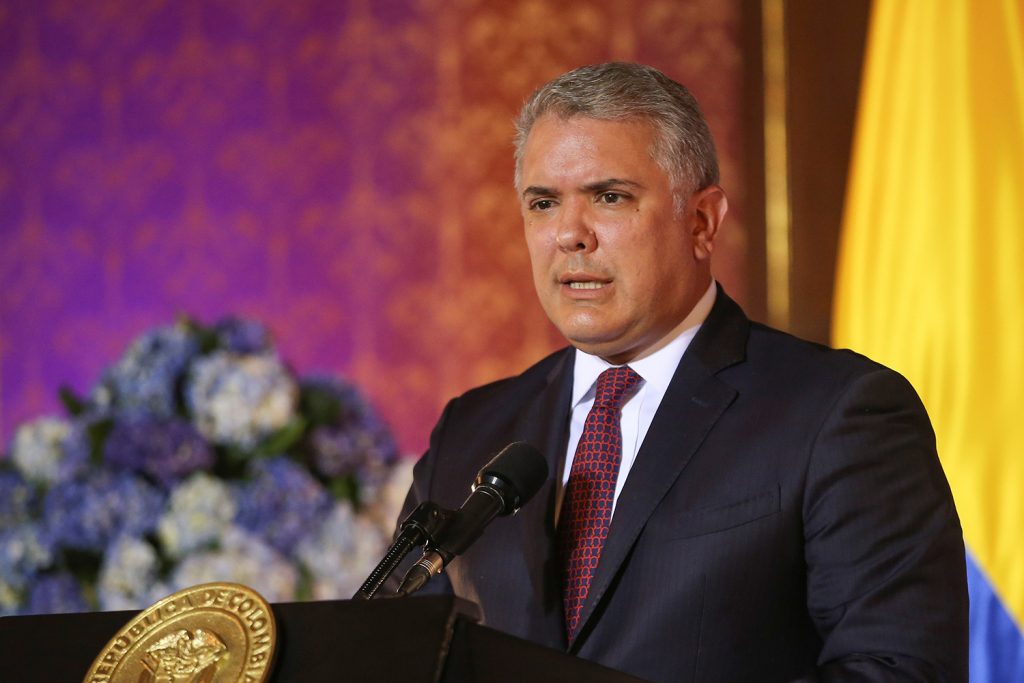 Colombia's President Ivan Duque speaks during the announcement of the granting of legal status of temporary protection to all Venezuelan migrants, in Bogota, Colombia February 8, 2021. REUTERS/Luisa Gonzalez

The ETPV will apply to Venezuelans in Colombia who crossed the border prior to January 31, 2021 as well as those who enter Colombia legally in the next two years. Once issued, ETPVs are valid for ten years. Colombian authorities estimate the measure will benefit more than two million people, granting them access to formal employment and essential services including healthcare and COVID-19 vaccinations.

This is a humanitarian gesture of massive scale: Colombia hosts 1.7 million Venezuelan migrants and refugees, making up 34 percent of the 5.4 million Venezuelans who have fled their country since 2015. While the ETPV reflects Colombia’s approach to the Venezuelan humanitarian crisis, it is also a good economic decision. Doing more to include migrants and refugees in the economy and formal labor market not only reduces their dependency on international humanitarian assistance, but also can contribute to the country’s post-COVID recovery and future economic growth.

Duque said that he hopes “other countries follow [Colombia’s] example,” while the International Organization of Migration’s Director General Antonio Vitorino similarly said the decision “serves as an example to the world” and United Nations High Commissioner for Refugees Filippo Grandi praised it as an “example of humanity, commitment towards human rights, and pragmatism.” US Secretary of State Antony Blinken also commended the announcement, affirming that “the United States stands with Colombia in support of refugees and migrants.”

Renewed and expanded international support is precisely what Colombia will need. Such a large-scale initiative will require tremendous investments of time, logistical planning, and resources. As Colombia begins to process ETPV requests, the international community should increase its technical, logistical, and financial aid to Colombia to help the country successfully roll out this initiative. Simply put: If Colombia succeeds in fully integrating Venezuelan migrants and refugees, so will the entire region.

Colombia will confront two daunting challenges in the immediate future. First, it needs to raise awareness about the initiative with the nearly two million migrants and refugees in the country, counter any misinformation around it, guide qualifying individuals through the registration process, review applications, and issue permits. This will be a herculean logistical task for Colombia’s migration agency and border-control police, especially given that more than half of the migrants and refugees entered the country without authorization and have not obtained a government-issued residence permit. The Colombian government will have to determine who crossed the border before January 31, 2021 (and therefore qualifies for the ETPV) with exceptionally little information about most people’s date of entry.

The second challenge is the likely spike in humanitarian needs, especially in border municipalities. Encouraged by the ETPV announcement, more Venezuelans might try to make their way into Colombia in coming weeks and months. With an estimated five to seven thousand people crossing the border every week, the Colombian government’s capacity to provide humanitarian assistance and essential services to an even larger number of migrants and refugees is meager. Director of Migración Colombia Juan Francisco Espinosa reiterated that only those who enter the country legally starting February 1, 2021 are eligible for the ETPV. However, scammers or “coyotes” have already begun to deceptively promise Venezuelans a fast-track entry to the ETPV program, offering to smuggle them into the country via illegal trails or “trochas.”

As Colombia navigates these logistical and humanitarian challenges, the international community should double down on its support to the country. Without increased financial, technical, logistical, and humanitarian aid, Colombia might fail to integrate the nearly two million Venezuelan migrants and refugees within its borders. This would not only compromise regional stability and security, but also the country’s future economic growth.