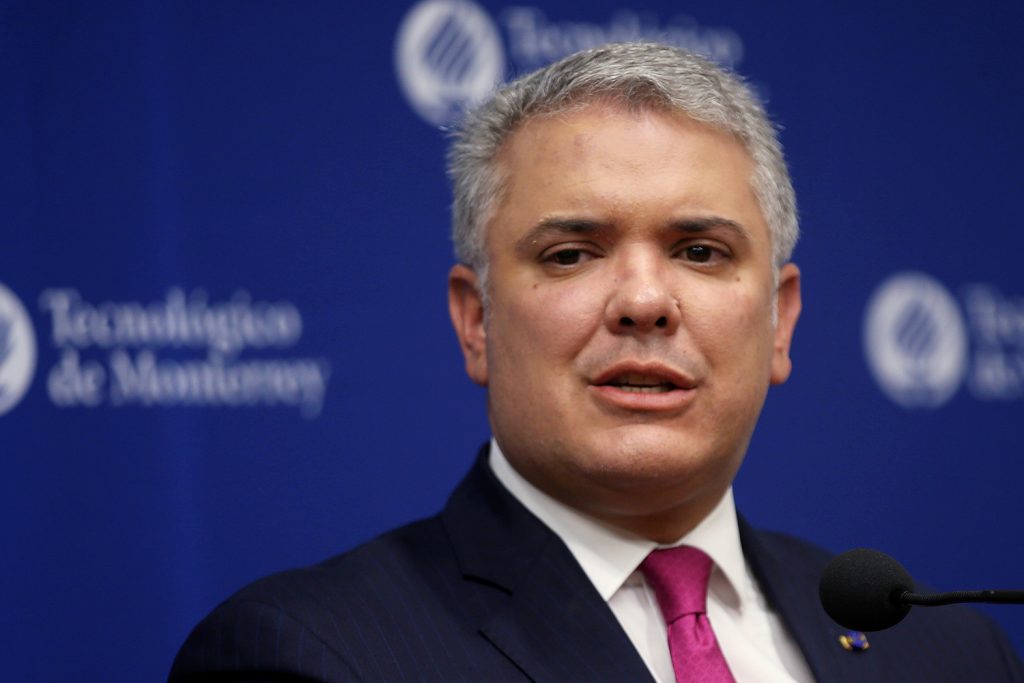 For most countries around the world, the spread of the novel coronavirus (COVID-19) has strained resources and demanded singular attention from policymakers. For Colombia, this new crisis must also be juggled with the ongoing collapse of neighboring Venezuela, which has already seen nearly 2 million Venezuelans seek refuge in Colombia. “We have had to manage two crises at the same time,” President Iván Duque explained on April 14, which forced Colombia to take drastic measures to contain coronavirus earlier than many of its neighbors.

Speaking on April 14 as part of the Atlantic Council’s Front Page event series and the Adrienne Arsht Latin America Center’s Leaders of the Americas series, Duque explained that limited healthcare capacity and the potential for an outbreak to explode in neighboring Venezuela compelled his administration to act quickly to limit the spread of the virus. Duque recalled that he had the first meeting with his health officials in December when the initial reports of the virus emerged from China and his government began putting travel restrictions and mandatory quarantine orders for travelers into place as soon as there were reports of spread in other countries.

Colombia eventually stopped all international flights, closed schools and universities, and shut down bars, clubs, stadiums, and concert halls. Duque said that these actions needed to be implemented quickly because of the country’s limited healthcare capacity. While Colombia has the most intensive care units (ICU) per capita in Latin America, it still pales in comparison to more developed countries, making the need to “flatten the curve” to avoid overwhelming the healthcare system more dire. He argued that “all of the time that we have been able to save by flattening the curve is allowing us to strengthen our capacities and allow us to have more testing capacity.” As of April 14, Colombia has 2,852 confirmed cases of coronavirus, with 112 deaths.

The added strain of the Venezuelan crisis—triggered by the economic and societal collapse of the country due to the misgovernance and exploitation of the Nicolas Maduro regime—also forced Duque to shut down the border between the two countries—a tough decision for a country that has made a considerable commitment to helping Venezuelans flee the instability. But “since there is no sound epidemiological system in Venezuela, since there is a lack of information, since the country doesn’t have more than 200 ICUs,” the risk of a rapid increase in cases in that country meant that the border had to be closed “to protect lives and to protect the healthcare system” in Colombia, Duque maintained. Duque implored the international community not to forget the plight of the Venezuelan people during this crisis, noting that support to Venezuelan refugees is roughly a tenth of what Syrian refugees have received.

In addition to limiting the potential spillover effects from Venezuela, Colombia has had to manage the devastating economic effects of social distancing. As Duque explained, the coronavirus emergency is not only a pandemic, but also an “oil price crisis…a world trade crisis, a world aggregated demand crisis…and a financial market crisis.” Policymakers are facing a terrible dilemma, he argued, as they are faced with a tradeoff between saving lives and damaging economies. “There is no economy that will work with bad health or massive loss of life,” he said, but also “if you do not have a vibrant economy you will not be able to improve the healthcare capabilities” needed to fight the virus spread.

Duque explained that his administration has attempted to find the balance between adequate distancing and economic activity by keeping “open sectors that were crucial for the Colombian economy and [our] supply chain,” including food and agriculture, essential services, banking, media, and government.” Colombia and other Latin America countries, however, must find a way to reach their massive informal economic sectors, which includes nearly half of Colombia’s workforce, Duque said. He reported that nearly 3 million Colombian families who “have never received a conditional cash transfer or were not in a social program from the state,” have been given cash payments to help them weather the crisis. The government has also begun delivering grocery packages to the poorest Colombians and has allowed workers to defer payments into the pension system for three months. Duque estimated that nearly 30 million of Colombia’s 50 million people have gotten some sort of assistance from the government, on top of extensive loan programs to small and medium enterprises (SMEs).

Duque said he hopes to “start reopening the economy by April 27,” although he cautioned that this will be a return to “productive life, but not social life,” as a return to normalcy will require a vaccine or significant treatment first. The restarting of economic activity will also be dependent on meeting the country’s growing demand for health equipment, a need that Duque acknowledged is shared by many countries around the world. The virus “is hurting us at the same time globally,” he explained, which means that “we are all fighting for the same products to face the challenges,” including ICUs, ventilators, and personal protective equipment (PPE). Developing countries are particularly disadvantaged in this respect, he added, as “we are fighting for the same elements to face the pandemic that the richest countries also need.”

The shortage of equipment cries out for a global response, Duque argued. “I think at a world level there is much to be done,” to better coordinate the flow of supplies and information, he said. Specifically, Duque continued, countries need to “run for a vaccine,” which is to only certain way to overcome the virus. While the international community scrambles to secure equipment, Duque said he was instructing manufacturers to start domestically producing ventilators and PPE to help meet demand. He suggested that the United States could be particularly helpful in this effort, especially once cases reach a peak there. “I believe the United States can help a lot of Latin America acquire technology,” for products such as fast tests, ventilators, and PPE, Duque said. He added that Latin American countries should try to emulate the United States’ Centers for Disease Control, which is “one of the world’s best epidemiological control units.”

Duque said he believed the current pandemic “is the most complicated crisis the world has seen since World War Two,” which will strain all societies around the world. For a country like Colombia, dealing with its unique challenges amid the coronavirus emergency will require the country “to be very smart with the limited toolkit that we have.” So far, Colombia has been spared the worst of the crisis, but Duque warned that meeting this challenge will require “continuous work that we have to monitor every single day.”