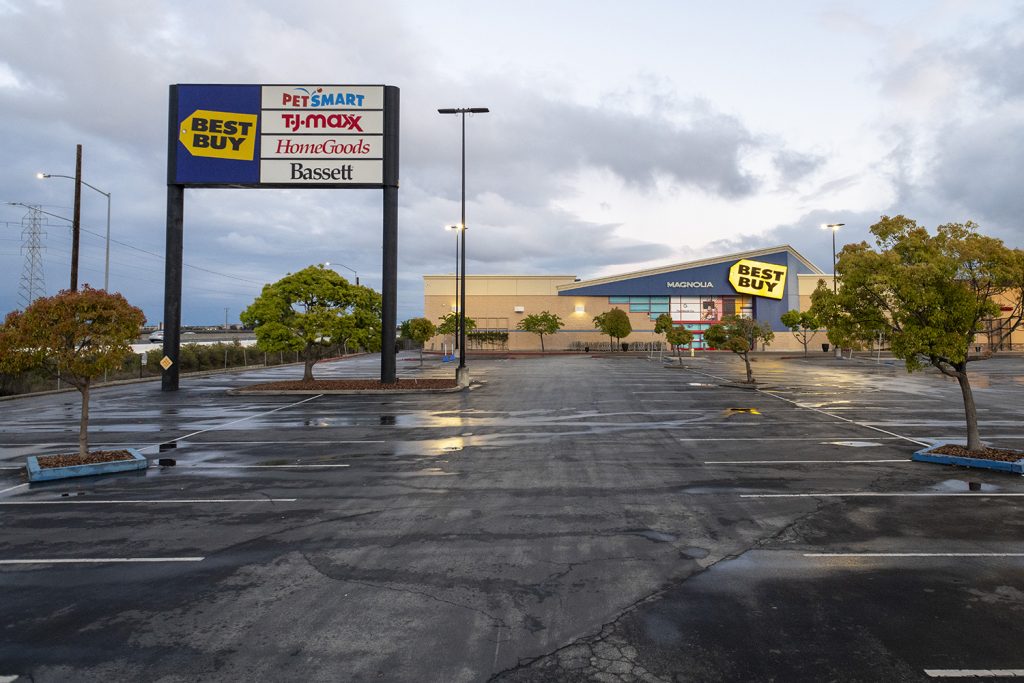 An empty parking lot is seen at Best Buy after it temporarily closed to shoppers in San Carlos, California, United States on March 24, 2020, due to an outbreak of novel coronavirus (COVID-19). The entire state of California has entered a "shelter in place" lockdown and encourage residents to stay at home as much as possible. (Photo by Yichuan Cao/Sipa)

The US Department of Labor’s unemployment release on March 26 gave fresh numbers to display the shocking and historic impact of the spread of the coronavirus and the resulting economic collapse in the United States. Initial weekly unemployment claims through March 21 came in at 3.28 million, a historic high surpassing all but the most pessimistic forecasts as well as the experiences in prior sharp downturns such as the oil crisis and global financial crisis. Amid continued market turmoil, both the Federal Reserve and the US Congress have advanced their initial economic policy responses. The pandemic is causing a trifecta economic shock to the global economy as aggregate demand collapses, supply chains are interrupted, and financial markets swing wildly.

Dire forecasts have been published in the past week about the depth and length of the downturn and the impact on unemployment that will result from a period of “social distancing” and the resulting sharp reduction in consumer demand. Federal Reserve Bank of St. Louis President James Bullard stated this weekend that unemployment may be as high as 30 percent for the second quarter, while Treasury Secretary Steven Mnuchin mentioned a possible unemployment rate of 20 percent in his discussions with the Senate over a stimulus package this week.

The US economy entered the pandemic with historically low unemployment (3.5% in February), having been at or near full employment for several years now.  In round numbers, approximately 160 million people are employed in the United States, with around 60 million of them employed by small businesses. The relevance of the unemployment claims lies in the fact that they are filed mostly by those who do not expect to find a next job in short order—aside from the information they provide on the labor market, they can also be seen as a proxy indicator of employees’ confidence in the economic tide turning. Similarly, if business owners have significant confidence in a quick rebound of the economy, they are much more likely to retain workers (“hoard labor”).

Research published by the US Private Sector Job Quality Index highlights the disproportionate hit to the employment picture for low income jobs (defined as jobs paying less than $802 weekly): as many as 37 million of those jobs are at risk, with restaurant workers (10 million) making up the biggest group. Generally, customer-facing workers in small- and medium sized enterprises (SMEs) are highly vulnerable. These companies have limited reserves and must respond to shocks by laying workers off. In prior downturns, SMEs have accounted for most job losses, and rebounded in terms of hiring more slowly than large corporates. Other highly affected sectors include retail, travel, and wholesale trade.

In terms of regional impact, by far the highest number of claims were filed in Pennsylvania (378,900), followed at some distance by California (187 thousand) and New York State (80 thousand). As the disease progresses in the United States and additional public health measures becomes necessary, it is reasonable to expect meaningful additional impact in the months to come in those states and metropolitan areas with a high exposure to affected industries, including Florida, Nevada, and Texas. As the economic impact lengthens and deepens, additional large drivers of employment become affected including construction, education, and manufacturing.

In previous weeks, the Department of Labor has already given states additional flexibility in terms of granting unemployment benefits to workers whose place of employment has shut down, quarantined employees, and those at risk of exposure or caring for an affected family member. The $2.1 trillion package of economic relief, support, and stimulus measures gets close to congressional approval this week. While it is the biggest single biggest spending bill in US history, it is clear from the unemployment numbers that additional measures will be needed in the months ahead. Some important provisions in the bill that will be key in blunting the economic impact, consumer confidence, and hiring behavior in coming weeks and months include: the untaxed one-time cash payments of $1,200 making less than $99,000, the four-month increase in unemployment insurance benefits by $600 (and the extension of the insurance to contract, self-employed, and furloughed workers still formally employed), tax credits for companies that maintain payroll, and close to $400 billion in loans to small businesses.

The implementation logistics of especially the small business loans imply that the impact of supportive measures will take some time to affect employer behavior. As both disease progression and policy making continue to evolve, it is highly likely that several more weeks of severe distress in the US labor market are ahead of us.

The Fed ramps up its coronavirus response

On March 23, the Fed announced meaningful additional measures to support the US economy, following dire predictions from some senior policymakers over the weekend. In its statements, the Fed restated its commitment to deploy “its full range of tools to support the US economy,” and its next steps do not by any measure exhaust those tools. The Fed, in other words, has multiple “kitchen sinks” to throw at problems.