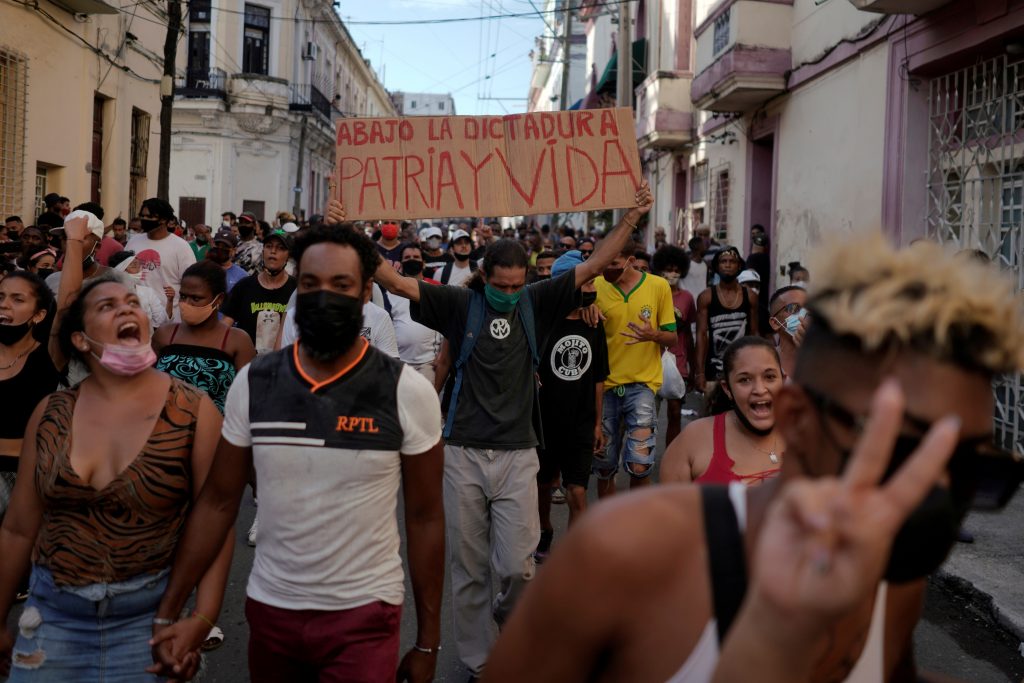 One month ago, thousands of brave Cubans marched into the streets to say, “enough is enough.” The largest anti-government demonstrations in decades centered on Cuban citizens’ frustrations with the government’s inability to satisfy people’s basic needs amid the pandemic and, of course, the repressive nature of the Cuban state. The street protests have calmed down, at least for now, but this is still a perilous moment for the island—with the Cuban people in need of continued backing from the international community and ongoing focus from the United States.

Prior to the protests, Cuba’s economy was in severe decline. The economy contracted by 11 percent due to the pandemic, as tourism, a main source of revenue, came to a halt. The struggling economy, on top of persistent economic mismanagement by the Cuban authorities, contributed to widespread food and medicine shortages. All this occurred as the Cuban government grappled with addressing COVID-19 infections while simultaneously using its meager resources to develop its own vaccine. The effects of the pandemic exacerbated the already-growing calls by the Cuban people for economic and political reforms on the island. The result was that Cubans—in particular Afro-Cubans, who suffer from structural racism—had almost no access to basic public goods and social services.

Fast-forward to today: A month after the massive demonstrations began, more than five hundred people are still detained for their roles in the protests—with more Cubans under constant threat that they could be next. Although the headline-grabbing activity in the streets has subsided, the people’s demands persist. Cuban President Miguel Díaz-Canel, who became the coveted head of the Communist Party in April, is using the same repressive tactics as his Castro predecessors. Reports from the Miami Herald have indicated that many of the detained protesters are being held in a maximum-security prison, with family members unable to reach them.

The protesters have the backing of many Cubans—both on the island and in South Florida—which has spurred a tough, new resolve from the US government. After the protests, the Biden administration quickly moved to impose sanctions again those responsible for recent crackdowns. In addition, Biden’s team is assessing new ways to extend internet access across the island, aiming to increase staff at the US embassy in Havana, and exploring methods to allow remittances to flow to the country without lining the pockets of the Cuban government. These efforts by the Biden administration appear directed toward increasing pressure on the Cuban government to accelerate long-overdue private-sector reforms and an eventual push for a democratic transition.

US policy toward Cuba has implications beyond the two nations. Countries in the region, where US-Cuba policy has long been a divisive topic, are playing close attention to the American response to the protests. Many Caribbean and Latin American governments regularly criticize the US trade embargo and are supportive of Cuba, while others raise concerns about the island’s approach to human rights. This division plays out in multilateral forums like the United Nations, where in June the United States and Israel were again the only two countries to vote against a resolution calling for an end to the embargo. At a regional level, the chair of the Organization of American States Permanent Council recently had to postpone a meeting about the situation in Cuba after several participating countries objected because Cuba has long refused to join the group so such a meeting “would serve no useful purpose.”

Meanwhile, the United States will increasingly have to contend with Cuba’s problems arriving on its own shores. As conditions on the island deteriorate, with Cuba now the worst COVID-19 hot spot in the Americas, more Cubans are likely to come to US borders. Reports are already pointing to an uptick in Cubans risking their lives on boats to reach Florida or traveling to Central America to make their way to the southwestern US border.

US resolve to stand with the Cuban protesters, which the Biden administration has already demonstrated, must remain strong long after the news cycle moves on; America’s political divisions and attempts to score political points on Cuba policy must not come at the cost of the Cuban people. The protesters will be further emboldened by continued US shows of support—from targeted sanctions to efforts to increase internet access—and Díaz-Canel will slowly run out of options as a result. That, in turn, might move him to loosen economic restrictions, which would empower people when the government cannot satisfy their basic needs—an important step toward greater political freedoms.

The Cuban people are hungry and sick, and violent repression will not fill stomachs. Detentions will not slow the spread of the pandemic. That’s why the frustration and exasperation expressed through these protests should scare the Cuban authorities. It’s one thing to repress calls for liberty and freedom, but it’s another to repress them alongside a call for basic survival.

Change will not happen overnight. But strong US backing for Cuba’s protesters can make a real difference as the country enters a new period of uncertainty—an uncertainty that could force the hands of the Cuban authorities.

Jason Marczak is the director of the Adrienne Arsht Latin America Center. Follow him on Twitter at @jmarczak.

Wazim Mowla is the assistant director for the Caribbean Initiative at the Adrienne Arsht Latin America Center. Follow him on Twitter at @WMowla.

Image: People shout slogans against the government during a protest in Havana, Cuba on July 11, 2021. Photo by Alexandre Meneghini/Reuters