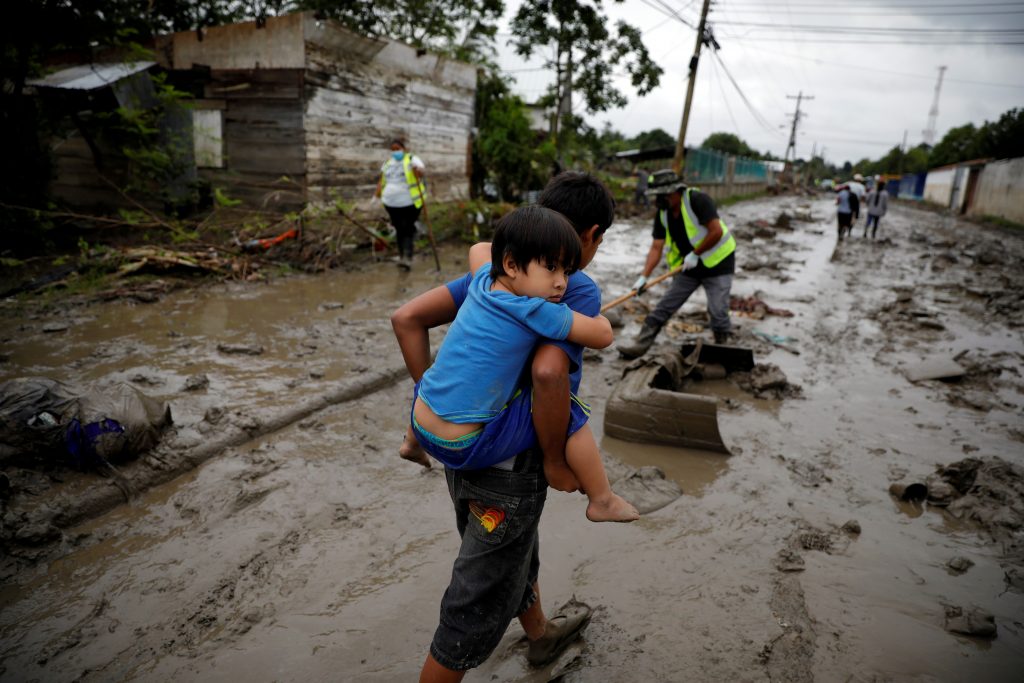 The ripple effects of last week’s Leaders Summit on Climate, led by US President Joe Biden, will be felt for years, as the international community embraced renewed momentum toward mitigating the impacts of climate change ahead of November’s UN Climate Change Conference of the Parties (COP26) in Glasgow, Scotland. With climate change impacts being felt across the Americas, urgency is rising in this pivotal part of the world.

The Leaders Summit brought together forty world leaders, including seven from Latin America and the Caribbean, representing Antigua and Barbuda, Argentina, Brazil, Chile, Colombia, Jamaica, and Mexico. The Americas are a crucial player in coordinated efforts to tackle global climate change, so we asked experts from the Atlantic Council and elsewhere to lay out what’s next.

What were some of the most ambitious commitments made by Latin America and the Caribbean in mitigating climate change? Are they aligned with the expectation put out by the Biden administration and COP26? How will the international community contribute to these regional efforts?

Jorge Gastelumendi is the global policy director at the Atlantic Council’s Adrienne Arsht-Rockefeller Foundation Resilience Center. He is also a COP26 high level climate champions co-lead for the Race to Resilience.

Putting nature-based solutions at the core of the efforts to fight climate change was the most outstanding, though not surprising, feature of commitments advanced by Latin American and Caribbean representatives—from Brazil’s president, Jair Bolsonaro, indicating the country’s commitment to end illegal deforestation in the Amazon by 2030, to Mexico’s president, Andrés Manuel López Obrador, committing to implement one of the largest reforestation programs in the world. Peru went even farther by committing that 50 out of the 150 actions in its climate plan will be nature-based solutions in sectors such as water management, land use, and forests. The main obstacles to materialize these commitments is the lack of implementation capacity in the region and the lack of financial resources from both public and private actors, particularly the financial sector. The international community, with the leadership of the United States, is critical in helping overcome these two obstacles. Colombia, for example, highlighted exploring innovative financial mechanisms, such as debt-for-adaptation swaps, which could avoid deforestation in the Amazon (a priority of Brazil, Colombia, and Peru) and protect the oceans (a priority for Chile).

President Bolsonaro, in his speech, raised the need for the right to development of current and future generations, also mentioning the Amazonian Paradox. What is the Amazonian Paradox and in what ways can a collaborative approach with the international community, the private sector, civil society, and indigenous communities help address it?

Rodrigo Lima is a lawyer with expertise in international trade, non-tariff barriers and sustainable development. He is the director of Agroicone, a Brazilian sustainable agribusiness organization.

The Amazonian Paradox emerges from the immense contradiction between the assets and potentials from a mega-biodiverse forest that covers almost five million square kilometers over nine countries, and the social realities and inequalities among its more than twenty-three million inhabitants. The possibility to provide effective value to the forest, generate profits from its services, promote its sustainable use, and allow its population to thrive from the economic benefits and environmental services reflects the challenge of the Amazonian Paradox.

It is reasonable to compare the Amazon to a puzzle that needs time and effort to be assembled. The Amazon is home to 329 indigenous lands, covering almost one million square kilometers—local communities, family farmers, medium and large farmers. About 640,000 square kilometers are non-designated public lands, which should be designated as national parks, private areas, indigenous land, or for other uses.

To organize the territory and create policies to enable a low carbon economy, while considering different actors and interests, depends on federal and state governments. But it also relies on cooperation from multiple sources. In this regard, climate finance can play a critical role not just in promoting Reducing Emissions from Deforestation and forest Degradation (REDD+) projects, but more broadly in creating and sustaining a flourishing nature-based economy.

The completed puzzle relies on fostering a thriving economy based on natural resources, tourism, sustainable agriculture, forest management, and conservation activities. Bioeconomy opens a huge possibility to build upon this challenge, connecting extractivist producers to processing facilities and the market, generating social co-benefits from REDD+ projects, harnessing sustainable agriculture production based on innovation and good practices, and generating cosmetics and medicines, among other activities that could transform the Amazonian Paradox into the Thriving Amazonia.

International cooperation, as discussed at the Leaders Summit on Climate and other forums, has a fundamental role to play to support assembling this puzzle. The Amazon cannot be seen as a pure protection area; it must enable and promote social, economic, and environmental benefits for its population while it generates environmental goods to all society.

President López Obrador, in mentioning Mexico’s reforestation program, suggested its expansion to the South of Mexico and into Central America, generating jobs. He also suggested temporary work-permits and residency in the United States for those committed to this program, as a mechanism to address the migration crisis. How could the climate crisis be a greater challenge to the current border crisis? In what ways could addressing climate issues also be an opportunity to solve migration?

Maria Fernanda Bozmoski is the deputy director for programs at the Atlantic Council’s Adrienne Arsht Latin America Center, where she leads the Center’s work on Mexico and Central America.

Hurricane season in Central America is right around the corner, and back-to-back natural disasters may bring the region to the breaking point. The number of migrants will likely increase in anticipation of hurricane season, as well as in the aftermath. While migration from the dry corridor—which stretches from Guatemala to Costa Rica—is likely, hurricanes also greatly affect the Caribbean coast. The Central American Integration System (SICA) estimates that up to eight hurricanes may form in the region this year. Four of the eight may be intense, according to the organization.

Climate change is both a long-term push factor for migration and an accelerant. The United Nations estimates more than 7.3 million people were directly impacted by hurricanes in 2020, and there are more than 8 million starving people in Honduras, Guatemala, and El Salvador—up from 2.2 million in 2018. While the nearly four-fold increase in starvation is not all a result of the climate crisis, the destruction of crops and villages is a factor in this increase. In fact, experts find that climate change is a major factor explaining in the current surge in hunger.

The consequences of climate change are being felt now by current generations and the Caribbean nations are particularly impacted. Like other heads of state, the leaders of Antigua and Barbuda, and Jamaica reinforced the need for support and collaboration on addressing climate change. How could the international community support Caribbean nations in adapting to the existing and upcoming consequences of the rise in global temperatures?

The international community can support Caribbean nations and other small island developing states (SIDS) by acknowledging the World Meteorological Association’s 2020 Report that sea level rise has doubled, and hurricanes have intensified, so the imperative to finance climate adaptation is urgent. Prime ministers Gaston Browne of Antigua and Barbuda, and Andrew Holness of Jamaica urged acceleration of the pace of implementation of existing accords. This would mean not only funding the financing mechanisms foreseen in the original Paris Climate Accord but also those outlined in the Warsaw Mechanism and the Samoa Pathway. More importantly, multilateral institutions must continue to mobilize capital for greater investments in renewable energy and green technologies. The Caribbean SIDS are also urging new metrics in the form of a multi-dimensional vulnerability index that would facilitate access to concessional financing.

Commitments on energy transition and renewable energy were popular among leaders at the summit. In terms of transitioning to cleaner energy, how close is Latin America and the Caribbean to reaching that goal and significantly reducing its greenhouse gas emissions? What key steps could be taken to accelerate an energy transition in the Americas?

Though the reaffirmation and raised ambitions for climate action last week from across Latin America and the Caribbean were encouraging, regional progress to meeting climate goals has thus far been inconsistent. That said, growing electricity demand and the cloudy forecast for hydropower (long the prevailing baseload electricity source in the region) presents an important opportunity for countries to take significant steps to transform their energy mix and kickstart their climate goals. Accelerating the introduction of a mix of variable renewables, low-carbon natural gas resources, and in some cases nuclear energy, will offer alternatives to bioenergy, diesel, and coal in order to fulfill new electricity demand while also replacing potential declines in hydropower output. Additional efforts to decarbonize the transportation sector will also further electrify the region and support reduced emissions. Taken together, this makes investment into accompanying grid infrastructure as well as digitalization and energy efficiency important next steps in maximizing the emissions-reducing potential of regional electrification and energy transition.

FAST THINKING: Why economic development is key to addressing the migration crisis at the US border

On this episode of Fast Thinking, Atlantic Council experts Rebecca Scheurer and Jason Marczak dive into the root causes of mass emigration from Guatemala, Honduras, and El Salvador, and offer recommendations for long-term solutions to the underlying push factors that drive people from their homes—including crime, gang violence, corruption, and climate change.

Al Jaber, the United Arab Emirates’ minister of industry and advanced technology, reflected on the connection between climate partnerships and economic results.

Image: A child carries his brother in a street covered in mud after the floods caused by the rains brought by Hurricanes Eta and Iota, in La Lima, Honduras on December 8, 2020. Photo via Jose Cabezas/Reuters.