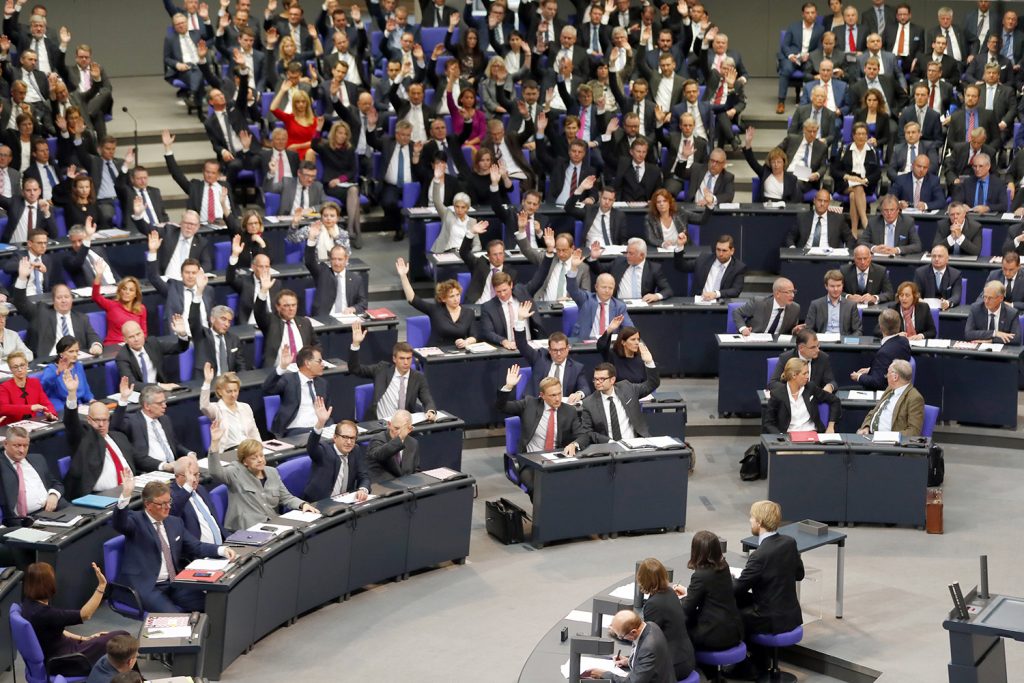 Delegates vote during the first plenary session at the German lower house of Parliament, Bundestag, after a general election in Berlin, Germany, October 24, 2017. REUTERS/Fabrizio Bensch

“This is a time when we have to collaborate and work together. There are vacuums in leadership around the world…and a huge role for members of parliament and legislators,” US Congressman Bill Keating (D-MA) said on February 16.

Speaking at the launch of the Commission on Advancing a Free World at the Munich Security Conference Keating argued that “when we look around the world, there are many agitators and threats. However, when you bring together all the democracies and the passionate individuals standing up for freedom and the rule of law, we represent one of the greatest and far reaching coalitions the world has ever seen.”

The Commission brings together influential lawmakers from the US Congress and leading democracies across Europe and the Asia-Pacific to coordinate legislative action on critical challenges, such as Russian election interference, Chinese 5G networks, Iranian influence, and North Korea’s nuclear program.

Several commission members agreed that there is a growing need for democracies to synchronize legislative measures in order to combat the growing influence of China’s authoritarian model, the opportunistic aggression of Russia, and trends of global democratic decline.

US Representative Tom Malinowski (D-NJ) underscored the importance for legislators to coordinate across national boundaries and speak with a unified voice as autocratic regimes attempt to disrupt the global rules-based order. “We’re here because I think we are all very cognizant that the central struggle in the world right now is between democracy and authoritarianism, between democracy and kleptocracy.”

“At a time when the free world and its values are increasingly under threat…it is more important than ever for like-minded nations to unite in common cause and purpose,” US Representative Mike Gallagher (R-WI) later added.

Jurgen Hardt, a Member of the Foreign Affairs Committee in the German Bundestag, said “it’s necessary that parliamentarians from all continents, from our countries, stay together to promote democracy and rule of law and freedom and human rights.”

Levitt agreed, maintaining that “When we look at the erosion of democracy…the importance of multilateral institutions, both the traditional ones and new opportunities to engage together, become ever more important.”

Former US Ambassador and Atlantic Council Distinguished Fellow Daniel Fried encouraged members to support the Declaration of Principles for Freedom, Prosperity and Peace, a statement of core principles aimed at revitalizing support for a rules-based order. As stated by former Secretary of State Madeleine Albright, co-chair of an Atlantic Council task force that produced the Declaration, the Declaration is intended to rally countries to “renew our democratic vows.” Ambassador Fried added that the Commission represented “the most important initiative” to come out of this effort.

Pro-democracy activists speak out against authoritarianism

Appearing before the Commission in Munich, several well-known pro-democracy activists from across the globe argued that in order for democracy to spread, democratic countries need to recognize ongoing struggles against authoritarian regimes and act with collective resolve.

Iranian human rights activist Azadeh Pourzan, argued that “the world seems to just forget” popular protests for government transparency and accountability in Iran. Russian opposition leader Vladimir Milov added that it is “extremely important that the democratic West speaks in one language and recaptures this banner of freedom.” Nathan Law, a student leader of the Hong Kong Umbrella Movement, explained that “authoritarianism, like a disease, is not confined to one place. If we don’t address it properly, it spreads. The world must never be complacent.”

Keating concluded his statements by noting, “we’re here with this new initiative to show that whether it’s Parliament, our Legislature, or Congress working together, we can make a difference.”

The Commission for Advancing the Free World is the latest effort of the Atlantic Council’s Democratic Order Initiative, a multi-pronged initiative aimed at defending democracy and advancing support for a revitalized and adapted rules-based order. It provides a complement to the D-10 Strategy Forum, a network of top policy planning officials from ten leading democracies.

The Atlantic Council serves as secretariat for the Commission.

The Commission will reconvene later this summer in Washington, with a hearing focused on the challenges posed by China.

Joseph Bodnar is a program assistant in the Democratic Order Initiative in the Atlantic Council’s Scowcroft Center for Strategy and Security.

Ash Jain is a senior fellow in the Atlantic Council’s Scowcroft Center for Strategy and Security.

Transforming the international order: US leadership or bust

While many nations throughout the globe have seen new levels of peace and prosperity under the rules-based order that the United States and its allies built in the wake of the Second World War, “not everybody accepts those principles and values that have been the foundation of that system,” according to former US National Security Advisor Stephen J. Hadley.