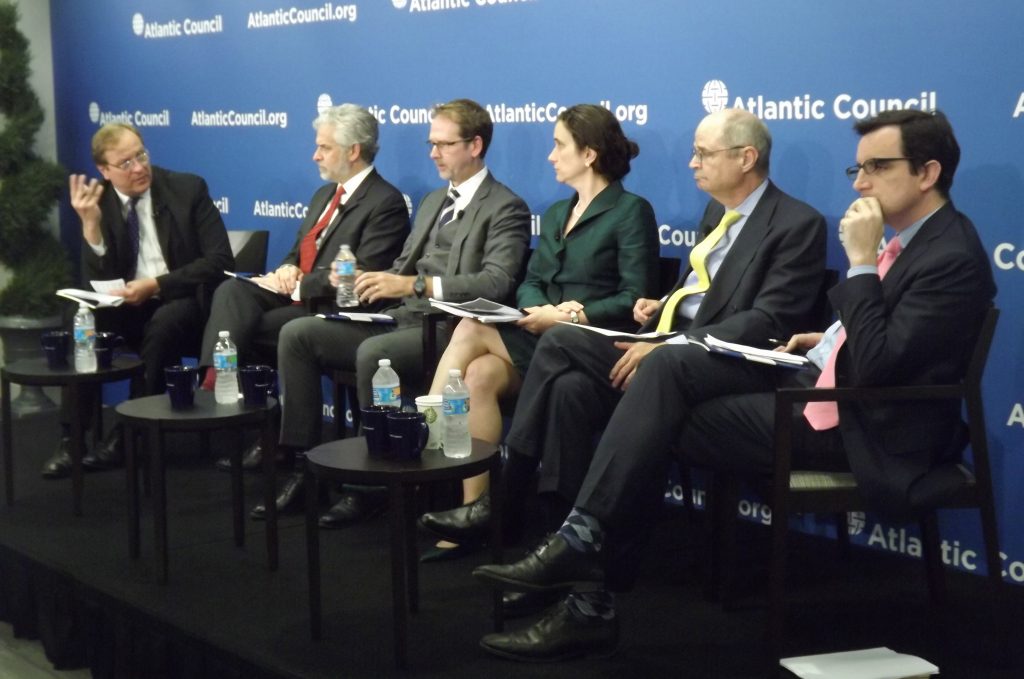 With war tearing apart eastern Ukraine, ethnic strife claiming lives from Libya to Yemen, and record numbers of African refugees drowning in the Mediterranean, it’s easy to conclude that the once-familiar world order is falling apart.

Whether or not that’s true, few scholars would dispute that the United States is no longer in charge as it was in 1945—at the end of World War II—when the US economy accounted for 50 percent of global GDP.

Today, that figure is more like 18 percent, said Barry Pavel, who with Peter Engelke is the author of a new strategy paper, Dynamic Stability: US Strategy for a World in Transition.

On April 22, Pavel and Engelke presented their sixty-page report—the first in a series of such papers—at a panel discussion hosted by the Atlantic Council’s Brent Scowcroft Center on International Security.

Pavel, the center’s Vice President and Director, and Engelke, a Senior Fellow there, talked with three panelists: Nora Bensahel of American University’s School of International Service; James Dobbins, a Senior Fellow at RAND Corp.; and Thomas Wright, Director of the Brookings Institution’s Project on International Order and Strategy.

“We see two major trends. The first is a very significant shift of state power to Asia, and the global south to a lesser degree,” said Pavel. “The second is more novel and more uncomfortable: individual empowerment and the power of non-state actors to take strategically significant action on a national or global scale, driven by the rise of the global middle class.”

Pavel said that by 2030, five-eighths of the world’s population will belong to the middle class—and their demands for consumer goods will fuel a revolution in computer 3D printing, biotechnology, and other innovations.

“We’ll be able to do great things, but also a lot of dark things, including the possibility of bioterror or bio-error. This has to be recognized when you’re thinking of global security,” said Pavel, a former top official at the National Security Council. “It’s not just nations dealing with each other, it’s nations dealing with individual groups and corporations that are not traditional actors. This has vast implications for strategy that we’re missing in many ways.”

He added: “Stability is still very important, but it’s no longer sufficient. What has to take its place along with stability is the pursuit of harnessing dynamic change for our national advantage. This will require a much more activist US approach than we’ve seen in awhile. I hope we’re up to it.”

Engelke, a Resident Senior Fellow with the Atlantic Council’s Strategic Foresight Initiative, argued that the nature of American society and culture make the United States “uniquely well-suited to take advantage of the shifting ground” of international economic systems.

“We agree very much that the values Americans have stood for, and the world we have led since 1945, are worth preserving: democratic governance, the rule of law, respect for human rights,” he said. “But American insistence on the universality of its norms is something that might not always benefit us.”

In fact, Bensahel agreed that US power in relative terms is declining—but that it would be shocking if that weren’t the case, given how World War II decimated the rest of the world’s economy.

“The United States benefits tremendously from the international order. We created it, so it’s not surprising,” she said. “With just a couple of exceptions, the threats the US faces today are not fundamentally existential threats. But there’s a lot of talk that the world is a dangerous place. The number and type of threats are changing. We’re trying to manage a greater number of challenges at a time when complexity is increasing.”

Making things worse, she said, was partisan gridlock on Capitol Hill, which paralyzes US foreign policy on issues ranging from Eastern Europe to the Arab Spring.

“It’s very clear that our adversaries see our slowness in decision-making as a weakness that can be exploited,” she warned. “It’s even worse what it’s doing to our allies because we need them so much. It’s an under-appreciated dynamic.”

Yet Dobbins said the paper’s premise—that the pace of change is accelerating, that US power is declining, that there’s a breakdown in the global order, and that nation states are eroding in favor of nonstate actors—are all exaggerated.

“The pace of change was actually greater fifty years ago than it is today. Computers are a big deal, but they haven’t made as big a difference as did electricity and telephones and the internal combustion engine,” said Dobbins, who has served as special US envoy for Somalia, Haiti, Bosnia, and Kosovo.

“Nation states are doing just fine in Europe, South America and certainly Asia. Yes, the Middle East is in a state of chaos, but that’s nothing new,” he said, noting that vast areas of the planet, ranging from the Balkans to Southeast Asia, are at peace today. “Remember when we had six or seven wars in Latin America going on all at the same time?”

Asked by Pavel if the world is more dangerous today than it was thirty, fifty or even one hundred years ago, the former diplomat replied: “I remember literally hiding under my desk at school during drills in case a nuclear bomb went off in New York City.”

“I can remember the Berlin Wall crisis, the Cuban missile crisis, and the Vietnam War. This is not the most dangerous time in our lives. The incidence of conflict in the world has been going down for seventy years, and particularly since the end of the Cold War. Most academics believe the level of conflict will continue to go down, but you wouldn’t guess that from today’s headlines,” he added.

One of those academics is Wright, who’s written extensively on the consequences of the euro zone crisis. He says scholars have focused too much lately on decline of US power.

“We’re coming out of the pre-season phase of 21st-century strategy discussions. The game has actually just begun. If you asked, before World War I, who would win the 20th century, there would have been no way to predict,” he said. “The world is becoming more complex because of the nuclear rivalry that’s coming back, but it’s a slow burn. The risk has gone up on a day-to-day basis, but we are not much more likely to be killed by a nuclear weapon today then we were last year.”