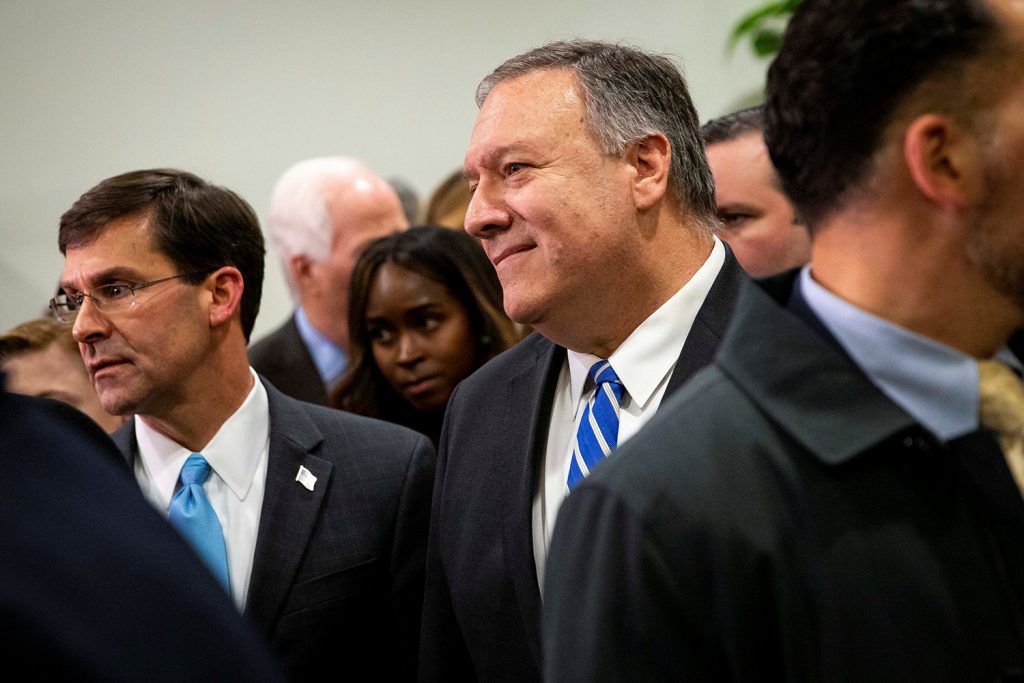 U.S. Secretary of State Mike Pompeo and U.S. Defense Secretary Mark Esper depart following a briefing on developments with Iran after attacks by Iran on U.S. forces in Iraq, at the U.S. Capitol in Washington, U.S., January 8, 2020. REUTERS/Al Drago

Days after the targeting of Iranian General Qasem Soleimani and a retaliatory missile strike on Iraqi bases housing US troops, Congressman Seth Moulton (D-MA) warned that “we find ourselves closer to war with Iran than at any [other] time in my lifetime.”

Moulton and Senator Christopher Murphy (D-CT) both heavily criticized US President Donald J. Trump and his administration for what the lawmakers argued has been a failed policy towards Iran during an Atlantic Council event on January 9. “This entire escalatory lead up,” Murphy contended, “was all an exercise of choice.” While both Democratic lawmakers conceded that Soleimani—who led the Iran’s Islamic Revolutionary Guard Corps (IRGC) Quds Force—was an enemy of the United States and responsible for the deaths of US soldiers, they called into question the administration’s decision to target Soleimani on Iraqi soil and at a moment of such high tensions in the region.

After months of large protests throughout Iraq that—among other demands—called for the weakening of Iranian influence in the country, the January 3 killing of Soleimani “essentially gifted to radical Shia political leaders [in Iraq] an ascendency,” Murphy argued. He stressed that the timing of the attack is particularly dangerous as the United States looks to prevent a resurgence of the Islamic State of Iraq and al-Sham (ISIS). “This was the absolute worst time to empower Shia radicals inside Iraq,” he said, because a marginalization of Sunnis within the country is “exactly what the lingering elements of ISIS need to mount a campaign of resurgence.”

Moulton added that the recent escalations with Tehran have dented the momentum of similar protests in Iran. While Iranian leaders were on the back foot at the end of 2019 and facing significant internal pressure, “today Iran is more aggressive, its hardliners more emboldened, and its country more united,” thanks to the Trump administration’s actions, Moulton argued.

Murphy also criticized the Trump administration for not notifying US lawmakers of the impending action. According to the senator, the administration needs to notify Congress of potential military action unless there is the threat of an imminent attack. Murphy said that in a briefing before members of Congress on January 8, US Secretary of State Mike Pompeo and US Secretary of Defense Mark Esper “provided no evidence of an imminent, immediate attack.” Moulton agreed, saying “if there is intelligence that shows this strike prevented a new and imminent threat to Americans, I have yet to see it.”

The US House of Representatives was set to vote later on January 9 for a resolution that would require Trump to receive congressional authorization for further military action against Iran unless an attack was imminent. Although Murphy said he was confident the measure would also pass the Senate, he cautioned that there are likely not enough votes for the resolution to override a likely presidential veto.

Moulton argued that the Trump administration has not reached any of its own goals through its Iran policy, which withdrew the United States from the 2015 Iran nuclear deal in favor of escalating sanctions and “maximum pressure.” Rather than preventing Tehran from getting a nuclear weapon and stopping its regional aggression and support for terrorism, Moulton said, the administration’s policy has brought Iran closer to a nuclear breakout and the region engulfed in violence. Murphy explained that the crippling sanctions imposed by the United States on Iran were viewed by Tehran “as an effort to strip away Iran’s access from the international oil market”—the lifeblood of the Iranian economy. Since Iran could not have nearly the same economic impact on the United States, Murphy said, Iranian officials used “the tools they had available,” to push back, including downing a US drone, seizing oil tankers in the Persian Gulf, and striking a Saudi oil installation in 2019.

Moulton argued that the United States needs to reverse course if it is to prevent Tehran from acquiring nuclear weapons and avoid a conflict, starting with “strengthening and lengthening” the 2015 nuclear deal—known as the Joint Comprehensive Plan of Action (JCPOA). “We need to reignite the diplomatic effort to get that going,” he maintained, as “there is no better way forward.” Additionally, Washington needs to better communicate to Tehran “how they could change their behavior in exchange for lessening sanctions,” the congressman said. Even if Tehran wanted to stop its aggressive behavior, Moulton doubted that “they see a path out of this,” and towards a normalization of relations with the United States.

Despite the rising tensions between the United States and Iran, Moulton saw this crisis as “an opportunity to break inertia” in US Middle East policy. US policymakers need to stop thinking about Iran as an international boogeyman and instead realize that “Iran is a bad actor, but they are a mid-level power that does not pose an existential threat to the United States.” The worst-case scenario, he argued, was the sparking of an actual military conflict in the region. “The one thing worse than starting an unnecessary war in Iraq,” he asserted, “is starting an unnecessary war in Iraq that Iran wins.”

Washington and Tehran can step back – if they want to

US-Iran in crisis: Strategic ambiguity and loud weapons in cyberspace