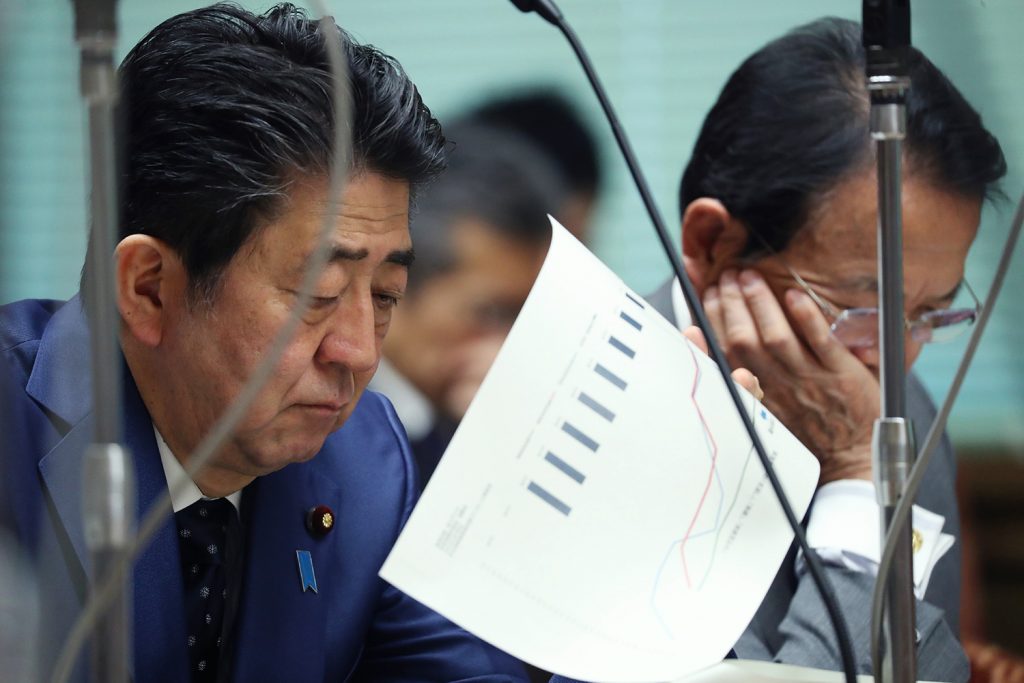 About $11 trillion of massive government support packages attempting to mitigate the severe impacts of COVID-19 have ballooned fiscal deficits across the world, including the United States. In the rush to protect against the pandemic-induced economic downturn, many have downplayed the serious consequences of the coming debt burden. These economists argue that deficits and debt don’t matter so long as interest rates remain lower than growth rates for a long period of time—allowing debt to gross domestic product (GDP) ratios to be stabilized or even reduced. This argument is incomplete and misleading. While low interest rates help, they don’t change the fact that rising government deficits must be financed by growing net savings by other sectors of the economy, thus reducing their consumption or investment expenditures.

Japan is often a misleading example for those who downplay the problems of debt. Tokyo has run budget deficits throughout the past three decades, creating one of the world’s highest public debt to GDP ratios, without any adverse effect on inflation and interest rates. But Japan’s household and corporate sectors have financed these public sector deficits, especially with a massive swing to net savings by the corporate sector. These sectors’ financial surpluses have mirrored weak private consumption and business investment, leading to a mediocre average annual growth rate of 1 percent in the past three decades—hardly a template for others to emulate! More importantly, complacency about high deficits and debt will divert attention from the urgent need to have a national debate in the United States and elsewhere about how to approach the task of fiscal consolidation to make the deficits sustainable in the medium term, as recommended by the International Monetary Fund in its June 2020 update of the global economic outlook.

The combined net lending by the household and corporate sectors in Japan has exceeded net borrowing by the public sector, resulting in current account surpluses (or net lending to the foreign sector). For 2020, the government deficit is expected to jump to 10 percent of GDP, boosting public debt to 252 percent of GDP. The fiscal deficit will be accommodated by increases in net lending by the household and corporate sectors, consistent with currently weak demand conditions and high precautionary savings. Beyond the foreseeable future, however, household savings as a share of GDP will resume its decline due to aging of the population—the old age dependency ratio is expected to rise from 56.9% of the working population in 2020 to 88.4% in 2050. Running budget deficits will be more difficult, but necessary to service the public debt and support the pension and healthcare needs of a growing elderly population, while the number of working age people declines. Consequently, the corporate sector will need to save more (with a negative impact on growth) and/or Japan will need to start borrowing from the foreign sector by running current account deficits—exposing itself to changes in international investor sentiment.

The US household sector has also been a net lender to the economy, with an annual surplus averaging $850 billion in the previous four years, rising to $1.3 trillion (annual rate) in quarter one 2020. However, the household sector financial surplus alone has not been sufficient to fund the deficits of the government sector (both federal and state/local governments) running at a four-year average annual rate of $1.2 trillion, rising to $1.7 trillion in quarter one 2020. Meanwhile the corporate sector borrows at a four-year annual average of $160 billion, declining to $35 billion in quarter one 2020. As a result, the United States has run a persistent current account deficit—borrowing from the foreign sector. The US fiscal deficit is expected to rise to 17.9% of GDP this year, pushing the public debt to 131 percent of GDP. The deficit could be accommodated by emulating Japan through growing net lending by the household and perhaps even the corporate sector—with consumption and investment being reduced amidst weakening growth. The United States can also borrow more from the foreign sector by widening its current account deficit. While the international reserve currency status of the US dollar has helped this process, it will add to the $12 trillion net external liabilities of the United States, making the country financially vulnerable in the long run.

While the exact outcome will depend on policy choices, any alternatives will entail some difficult tradeoffs—despite what some economists say, there is no free lunch in running large public deficits and building up debt. Japan has paid heavily for its high public sector debt through slower economic growth brought about by net household and corporate lending. The United States will need to get control over its debt, holding a public debate to build social and political support for a difficult reform and reprioritization of the US federal budget. This will need to be done to both deal with the consequences of massive public debt as well as meet the urgent need to repair and upgrade the human (healthcare, education and training, basic social safety net) and physical (transportation, clean and sustainable energy, broadband digital access) infrastructures of the country. The COVID-19 pandemic and widespread protests for social justice have dramatically showed the need for this new investment, but with the public sector debt burden already sky high, there will be no easy way out.

Private lenders need to step up on African debt relief

While policymakers have called for a moratorium on developing countries’ debt payments, bankers and bondholders have raised the alarm about how such action would decimate their bottom lines. There will need to be another approach.