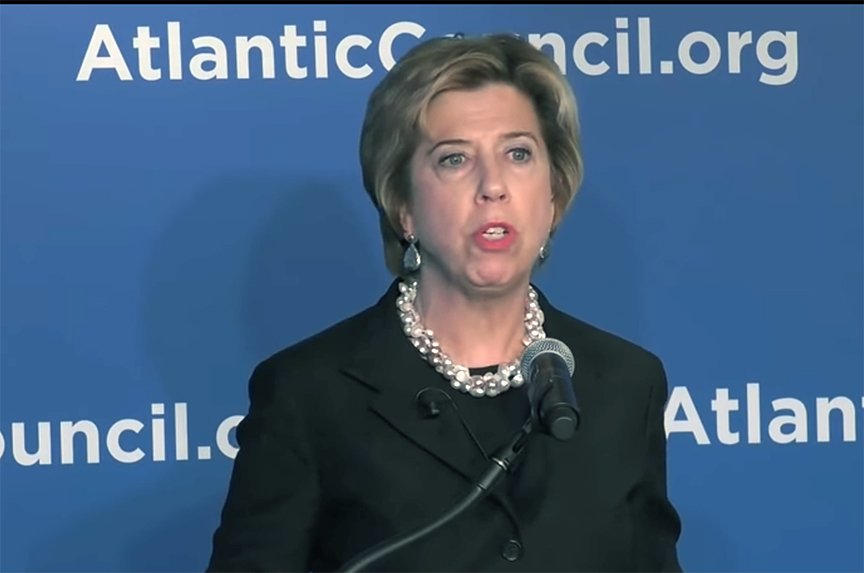 The United States would need to “reconsider” how it shares critical information with its allies if they adopt fifth-generation wireless technology (5G) offered by Chinese telecom giant Huawei, US Undersecretary of Defense for Acquisition and Sustainment Ellen Lord said at the Atlantic Council in Washington on March 25.

“If our allies and partners go with a Huawei solution, we need to reconsider how we share critical information with them because we want to make sure that that is secure information,” Lord said.

The Trump administration has consistently warned against the adoption of Huawei’s 5G technology, which Washington fears will allow Beijing access to private, public, commercial, and military communications between the United States and its allies and partners.

Lord specifically warned of the threat a Chinese-dominated 5G infrastructure could pose for the US military. “We cannot depend on a third party for our communications,” she explained, as “we need to make sure that when we send a critical message, that others aren’t hearing it.”

US Chairman of the Joint Chiefs of Staff Gen. Joseph F. Dunford said at the Atlantic Council on March 21 that Chinese mastery of 5G could not only affect “potential vulnerabilities in our systems… but also exchanging information with our allies and partners.”

US warnings against Huawei adoption, however, have had mixed reactions abroad. Bahrain, which hosts the US Navy’s Fifth Fleet, announced on March 26 that it would develop a new 5G network using Huawei technology.

Despite constant lobbying from the United States, the European Commission has decided not to ban Huawei’s 5G technologies, although it has publicly acknowledged the significant threat a Chinese-dominated 5G system could pose to communications with its allies. German Chancellor Angela Merkel has also ruled out explicitly banning Huawei, saying on March 19 that she does not believe that her country should “exclude a company simply because it’s from a certain country.”

Lord conceded that US efforts to convince allies about the dangers of Huawei have fallen short. “We can do a better job at talking about the risks,” she said.

She said that the United States does not currently have “a clear path forward to develop a 5G architecture and infrastructure,” while competitors, such as China, “are very quickly doing this.”

Lord described the development of 5G as “a huge opportunity, but it is also a huge threat.”

“If we don’t embrace it and apply it towards our goals, we could be overcome quickly with technical overmatch. We can’t allow that to happen,” she warned.

Retired US Marine Corps Gen. James L. Jones, Jr., executive chairman emeritus of the Atlantic Council, explained 5G technology “will become the bedrock of the digital infrastructure for the 21st century” allowing “the transmission of data at speeds one hundred times faster than the 4G networks we use today.”

“Those who establish and control this digital infrastructure will be able to capture and exploit the vast information—public and private—running through it,” he said. “In my mind, the race to develop secure 5G infrastructure is no less important than the race to put a man on the moon or to complete the Manhattan Project of the 1940s,” Jones added.

Despite the current disagreements with allies, Lord focused on the possibility that the United States could “come together with like-minded nations to come up with a whole system that we can both work together to develop.”

She argued that the United States “always work[s] with our allies and partners and would like to leverage them as much as possible — so international support could be part of our national solution.” In the short term, she said that the US Department of Defense is already talking to Swedish and Finnish companies Ericsson and Nokia about providing 5G infrastructure.

“Time is not on our side here,” Lord warned, but she reported that the Trump administration and all of the relevant government agencies have made 5G a top priority. The United States needs to come up with a plan to secure and promote a secure 5G network or, Lord said, “we could be left behind.”

Image: US Undersecretary of Defense for Acquisition and Sustainment Ellen Lord speaks at the Atlantic Council on March 25, 2019.