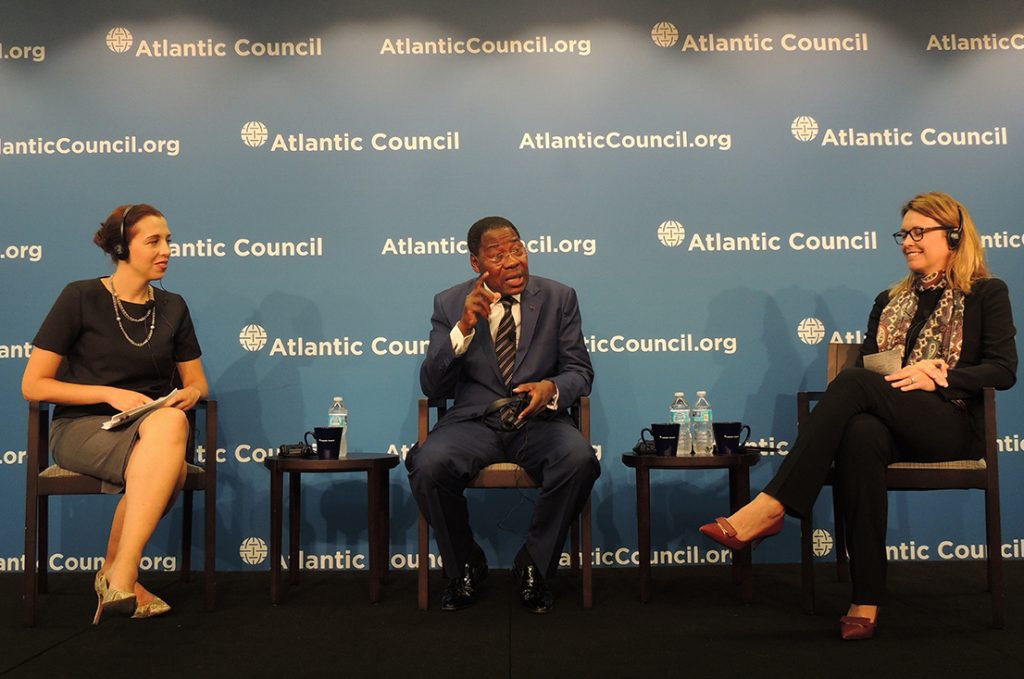 A new five-year, $375-million deal to develop the power sector in Benin will be the engine that will “jumpstart” democracy by contributing to stability in the West African nation, Benin’s President, Thomas Boni Yayi, said September 10.

Noting that the “winds of democracy are blowing” in Benin, Boni Yayi said this is essential for guaranteeing peace and stability, which in turn will create a stable investment climate and ultimately lead to prosperity.

Boni Yayi spoke at the Atlantic Council a day after joining US Vice President Joe Biden at the White House for the signing of the Millennium Challenge Corporation’s (MCC) second compact with Benin. The MCC is an independent US foreign aid agency.

In a continent notorious for leaders that cling to power, Boni Yayi stands out as an exception by pledging to relinquish the presidency at the end of his ten-year term in 2016. He says he wants to “help democracy.”

For democracy to flourish in Benin it is essential to have a strong judicial system, a guarantee of freedoms, security, and jobs for the youth, said Boni Yayi.

The President is particularly concerned about the high levels of unemployment among youth, a deficit he called a “time bomb” for democracy.

It is also important to find a solution to the “Boko Haram phenomenon,” or else “we won’t be able to promote democracy,” Boni Yayi, who spoke in French, said through an interpreter.

“We are willing and able … and I think we can overcome Boko Haram,” he added.

In 2013, Benin was not selected to receive the second compact after the MCC’s board concluded that it had not done enough to fight corruption.

Boni Yayi acknowledged that corruption in his country is a problem that hurts foreign investment, and proposed the implementation of sanctions to deal with the problem.

In a conversation with MCC CEO Dana J. Hyde and moderated by Aubrey Hruby, a Nonresident Senior Fellow in the Atlantic Council’s Africa Center, Boni Yayi expressed gratitude for the MCC’s second compact.

As is the case for much of sub-Saharan Africa, only a third of Benin’s population has access to power. Those who do have power endure frequent outages.

“The lack of access to power is one of the most intractable impediments to growth in Benin’s economy today,” said Hyde.

The MCC compact takes a “comprehensive approach to develop a sustainable power sector in Benin,” she added.

The MCC signed the first compact with Benin in 2006, which aimed to improve the investment climate and stimulate private sector growth in Benin. The MCC’s second-generation compacts are often focused on a single sector.

The second compact with Benin, which represents the MCC’s largest investment to date in solar power and the US government’s largest investment in off-grid electrification, aims to generate up to 78 MW of electricity, more than half of which will come from renewable sources of energy. The compact will invest in expanding power generation capacity with a focus on solar energy, in a distribution network, and in energy policies and institutions.

The second compact could integrate West African countries because Benin is an energy production hub from where the surplus will be distributed to countries in the region, said Boni Yayi.

“The fact of already strengthening production capability … works to strengthen integration,” he added.

‘Two birds with one stone’

“Energy must be factored into actual context, namely climate change,” he said.

The emphasis on renewable energy “will allow us to kill two birds with one stone in the fight against climate change,” he added.

Describing climate change as a serious threat facing Benin where rising seas have caused coastal erosion, the President said that a legally binding agreement on cutting emissions must be reached at the United Nations Conference on Climate Change in Paris in December.

Noting that the situation is “dire,” he added: the Paris conference “is the last chance.”

Image: The emphasis of the Millennium Challenge Corporation's second compact on renewable energy “will allow us to kill two birds with one stone in the fight against climate change,” said Benin's President, Thomas Boni Yayi (center). He participated in a discussion September 10 with MCC CEO Dana J. Hyde (right). Aubrey Hruby (left), a Nonresident Senior Fellow in the Atlantic Council's Africa Center, moderated the conversation.