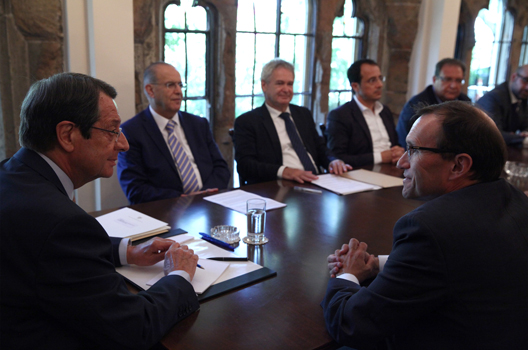 Presidential elections in the Republic of Cyprus, the southern Greek side of the divided island, on January 28 could provide an opportunity to restart reunification talks that collapsed last year. The very real prospect of energy cooperation should serve as a catalyst for those talks.

The two sides have missed past opportunities to come to a political understanding based on mutual energy needs. They must not do so again.

Last July, United Nations (UN)-brokered peace negotiations collapsed over the question of the presence of Turkish soldiers on the island. This may have been the best chance to end a bitter dispute, now in its fifth decade, and reunify the island into a bi-zonal, bi-communal federation.

The upcoming elections may provide an opportunity to resolve the Cyprus question, which has perpetuated deep divisions within the island’s politics and society. Should another round of negotiations fail, the two communities will have to find ways to work together even as they continue to share the island. Energy, specifically electricity projects, could be a solution.

Major natural gas discoveries  in the waters around Cyprus and Israel early in this decade initially appeared large enough to justify significant exports from both countries, creating an opportunity for a potential Cyprus-Israel-Turkey triangle of energy cooperation.

The 2010 discovery of the Leviathan natural gas field in Israeli waters by the Israeli company Delek Drilling and the US firm Noble Energy was the largest global gas find in a decade. Turkey, along with Jordan and Egypt, looked like attractive export options, and a pipeline to Turkey would have enabled Israel to rebuild a strategic partnership shattered by the May 2010 Mavi Marmara incident while earning an attractive financial return. Turkey was eager to buy Israeli gas, which was cheaper than supplies from Russia or Iran. However, the pipeline, would have to traverse the Cypriot continental shelf on its way to Turkey, who does not legally recognize the Republic of Cyprus. While the legal right of Cyprus, or any state, to block an international pipeline across its continental shelf is debatable under the UN Convention on the Law of the Sea, no serious international investor could ignore the objections of Cyprus, an EU member state.

The situation grew even more complicated with Delek and Noble’s 2011 discovery in Cypriot waters, the second-largest natural gas discovery in the Eastern Mediterranean. Though great news for the recovery of the Greek Cypriot economy, the discovery of the Aphrodite field aggravated political tensions between Ankara and Nicosia. Ankara argued that Nicosia had no legal authority to make decisions on hydrocarbon exploration without Turkish Cypriot participation. Ankara also claimed areas adjacent to Aphrodite as part of Turkey’s own continental shelf, a claim rejected by Greek Cypriot authorities, who charged ahead with plans to liquefy and ship the anticipated large-scale natural gas production to Europe and beyond.

Against this complicated backdrop of legal disputes and competing export strategies, participants in UN-brokered settlement talks that resumed in 2014 decided to leave energy issues aside until the Greek and Turkish Cypriots reached a comprehensive political settlement. This proved to be a missed opportunity.

A more creative approach could have fused the energy ambitions of Israel, Turkey, and Cyprus together with geological and commercial realities to transform natural gas in the Eastern Mediterranean into the “ultimate confidence-building measure” for Cyprus settlement talks.

This opportunity became possible in the summer of 2014, when Greek Cypriot Energy Minister George Lakkotrypis announced that Aphrodite’s gas reserves were one-third lower than originally anticipated, thus insufficient to justify investment in a liquified natural gas (LNG) export terminal. Additional gas discoveries would be needed to justify the LNG project, dubbed a national strategic priority by Greek Cypriot President Nicos Anastasiades. As exploration ensued, an opportunity arose for Delek and Noble to work with the governments of Cyprus, Turkey, and Israel to develop an Israel-Turkey pipeline in exchange for investing revenues from the project into a future Greek Cypriot LNG terminal. In this scenario, Turkey would have helped Greek Cypriots achieve their own strategic energy priority, generating a new pattern of cooperation and political goodwill that might have catalyzed a breakthrough in Cyprus settlement talks.

With this missed opportunity in mind, Turkish and Greek Cypriots have another chance to improve relations through energy cooperation, this time on electricity.  Some electricity cooperation already exists between the two Cypriot communities, including the reconnection of three pre-existing power lines, synchronizing  two communities’ electricity grids in January 2016.  Electricity now flows smoothly throughout the island in a single network, providing Greek Cypriots access to cheaper Turkish Cypriot power while reducing blackouts for Turkish Cypriots.

The existing north-south electricity link on the island has also enabled Greek Cypriots to achieve a key European Union (EU) goal: increased use of renewable energy.

Before 2016, Greek Cypriots had invested in 157.5 megawatts (MW) of wind power, but could only use 66 MW due to inadequate electricity supply from uninterruptable generation sources (e.g., diesel or natural gas) to meet demand when the wind was not blowing and/or the sun was not shining. By reconnecting the island’s two electricity grids in 2016, Greek Cypriots increased their access to uninterruptable electricity and were able to boost wind utilization by approximately 20 percent, up to 80 MW. The impact on the Turkish Cypriot population of reconnecting the power lines was a reduction in periodic blackouts, though electricity flowed more often from north to south because of Greek Cypriots’ general electricity supply deficit. This solution, agreed upon by both Turkish and Cypriot electricity authorities, was significantly more cost effective than the alternatives of investing either in additional conventional power generation or subsea electricity cables to another country.

This project succeeded thanks to creative cooperation between the Turkish Cypriot and Greek Cypriot electricity authorities, who circumvented political obstacles by concluding an informal agreement rather than a formal commercial contract. Building on this creativity, Greek Cypriots can further increase their renewable energy usage through a subsea power connection to Turkey. Spanning only 80 km, this cable could provide Cyprus 200 MW of additional electricity enabling Greek Cypriots to use all of their 166 MW of installed wind power capacity.

Perhaps more significantly, a Turkey-Cyprus electricity link could provide a strategic benefit to both the Republic of Cyprus and the entire EU by ending Cyprus’ status as the EU’s last “energy island.” The Republic of Cyprus is the only EU member state that still lacks physical connection with Europe’s electricity grid, the European Network of Transmission System Operators-Electricity, (or ENTSO-E). By connecting with Turkey’s electricity grid, Cyprus would gain a synchronized link with ENTSO-E thanks to Turkey’s synchronized inter-connections with Bulgaria and Greece.

However, some Greek Cypriot nationalists oppose a Turkey-Cyprus interconnection for political reasons tied to deeply entrenched differences, proposing an alternative 1,189-kilometer subsea cable from Cyprus to Crete and then to mainland Greece, known as the EuroAsia Interconnector. The project’s proponents argue it would enable Greek Cypriots to avoid vulnerability to Turkey cutting electricity supplies for political reasons. The EuroAsia Interconnector, however, is fraught with financial challenges, as it would be nearly fifteen times longer and proportionately more expensive than a Turkey-Cyprus interconnection.

In any case, Greek Cypriots need not choose between these two projects. A Turkey-Cyprus electricity interconnection could secure near-term economic, environmental, and strategic benefits, and its construction need not preclude the EuroAsia Interconnector. To be financially prudent, Greek Cypriots could develop a dramatically cheaper political hedge against Turkey by pursuing a subsea electricity cable to nearby Israel. This combination of Turkey-Cyprus and Israel-Cyprus electricity connections would revive and establish the Israel-Cyprus-Turkey energy triangle. The result could be new and positive avenues of strategic cooperation in the Eastern Mediterranean, which might even catalyze a future Cyprus political settlement.

Matthew Bryza is a nonresident senior fellow with the Atlantic Council’s Global Energy Center and a board member of Turcas, a major Turkish energy company (but which is not involved in Cyprus electricity projects). He served as a US diplomat for over two decades, including as ambassador to Azerbaijan and deputy assistant secretary of European and Eurasian affairs.