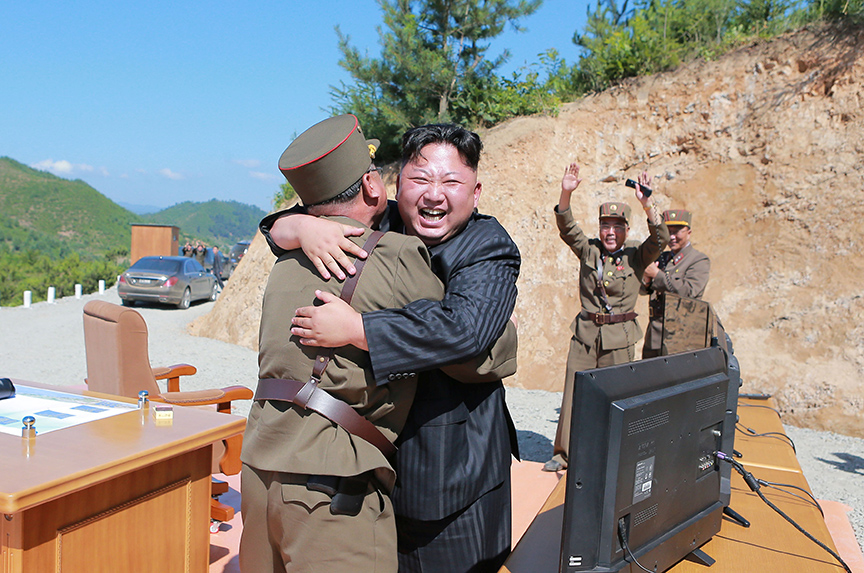 North Korea’s successful test of an intercontinental ballistic missile (ICBM) that has the ability to strike Alaska could embolden Pyongyang to be more aggressive in the future, according to an Atlantic Council analyst.

“With this nuclear ICBM ‘shield,’ the DPRK [North Korea] likely will be much more aggressive in every other area of its foreign and military policies. We are entering a new and very dangerous era,” said Barry Pavel, a senior vice president, Arnold Kanter Chair, and director of the Atlantic Council’s Brent Scowcroft Center on International Security.

On July 4, six months after Trump had tweeted that a North Korean test of an ICBM capable of reaching the United States “won’t happen,” North Korea said it had tested such a missile that could hit Alaska.

“What’s most concerning will be the tenuousness of deterrence with a very emboldened North Korean regime that doesn’t share our concepts of nuclear deterrence and escalation, and doesn’t have a rational nor effective decision-making process supporting leadership decisions, especially during a crisis,” said Pavel.

Noting that North Korea has front companies in a number of countries, including in China and Malaysia, that allow it to get the cash and components it needs for its missile and nuclear programs, Robert A. Manning, a senior fellow in the Scowcroft Center, said US President Donald J. Trump’s administration must double down on sanctioning these institutions.

“We have pretty good intel on that kind of stuff… If we get wind that they are doing something, we should not hesitate to intercept it,” said Manning.

In June, the Trump administration imposed sanctions on a Chinese bank, a Chinese company, and two Chinese citizens. US Treasury Secretary Steve Mnuchin said the Bank of Dandong had laundered money for North Korea.

The Trump administration has struggled to formulate a response to the North Korean crisis that has threatened to overshadow the president’s trip to Europe this week.

In an earlier memo to Trump, Manning and Pavel, wrote: “Due to the grave risks that a North Korea with an operational ICBM would entail for US security interests, continuing to pursue status quo policies is not an option. Time is against us.”

Trump’s options for dealing with North Korea are limited. His previous attempts to dissuade North Korea from developing its defense program—the January 2 tweet and his comments in April to Fox Business Network that “we are sending an armada” to deal with the threat posed by North Korea—have proven unsuccessful.

China is the linchpin to a successful North Korean policy because it accounts for more than 90 percent of North Korea’s trade and is Pyongyang’s only ally. However, the United States and China are split over how to deal with North Korea.

Beijing, which favors engagement with Pyongyang, has been reluctant to press the North Korean regime too hard, partly out of a fear that a collapse would send thousands of refugees streaming across the border into China and could result in a unified Korea allied with the United States on its border.

Trump, who has described North Korean leader Kim Jong-un as a “smart cookie” and said he would be “honored” to meet him, has reportedly become less inclined toward diplomatic engagement with the regime since the death on June 19 of Otto Warmbier, an American college student, after his release from North Korean custody.

Trump criticized China on July 5 for failing to do more to pressure North Korea. In a pair of tweets, he appeared to suggest that he was re-evaluating the United States’ trade relationship with China. Trump is expected to meet Chinese President Xi Jinping on the sidelines of the G20 summit, which is being held in Hamburg, Germany, on July 7 and 8.

Even though South Korea joined in military exercises with the United States on July 5, its new president, Moon Jae-in, has long advocated a policy of engagement with North Korea.

Barry Pavel and Robert A. Manning spoke in an interview with the New Atlanticist’s Ashish Kumar Sen. Here are excerpts from our interviews.

Pavel: It’s game changer number one—the “first” testing of an ICBM.  More testing is needed for them to have confidence of its operational effectiveness. They still don’t have the demonstrated ability to deliver a warhead to a target over such distances, and having the warhead survive re-entry into the Earth’s atmosphere and hit a target.

What’s most concerning will be the tenuousness of deterrence with a very emboldened North Korean regime that doesn’t share our concepts of nuclear deterrence and escalation, and doesn’t have a rational nor effective decision-making process supporting leadership decisions, especially during a crisis.

With this nuclear ICBM “shield,” the DPRK likely will be much more aggressive in every other area of its foreign and military policies. We are entering a new and very dangerous era.

Manning: The North Koreans love to do these things to provoke us on holidays like July 4. The timing was not a coincidence.

The missile test is an important step forward in their program, but I’m not sure it is a game changer—deterrence would be more precarious, but they are still not suicidal. The assumption a lot of us who have followed this situation have had is that sooner or later [North Korea] is going to acquire an ICBM. We’re talking about 1960s technology here.

I think they are still two to three years away from demonstrating that they can land a re-entry vehicle and hit a target, let along with a nuclear weapon on it. They have ways to go and there are a number of things we can do to disrupt that program.

Q: Why is Kim Jong-un in a rush to develop a nuclear weapon?

Manning: I think he wants to achieve this capability and then force the United States into accepting it. What worries me is that given what happened to [Libyan leader Moammar] Gadhafi and Saddam [Hussein of Iraq] you can understand why North Korea might feel that it needs to have three or four nukes as an insurance policy against an American attack. But what [Kim] is doing is way above and beyond basic deterrence. He is doing a sophisticated nuclear dyad of submarine and land nuclear force with multilayered missiles. I worry that he somehow thinks he can threaten or win a limited nuclear war. That’s where things get really dangerous.

Q: What are President Trump’s options for dealing with this threat?

Manning: The general direction where the [Trump administration] is headed is going to the United Nations and getting China on board for much tougher sanctions with the goal of totally  cutting off [North Korea’s] access to the international financial system as was done to Iran.

North Korea has front companies in a number of places, including China and Malaysia, to get components it needs for its [missile and nuclear] programs. We have pretty good intel on that kind of stuff. We should make a stepped-up effort. If we get wind that they are doing something, we should not hesitate to intercept it.

We need to work not just with China, but also with South Korea and Japan on intelligence cooperation and security cooperation.

Trump’s tweets are not helping. He is not doing himself or US national interests any favors. People are starting to think he is unserious. That is not something you want to project. We have the world’s most powerful military and people have to take it seriously. One thing Trump should say, which he has not, is to make it very clear that if the North Koreans ever use a weapon of mass destruction there will be a swift and overwhelming response from the United States and South Korea, and that Korea would be unified by force and they will be gone.

Q: China reacted sharply to the US sanctions on a Chinese bank and a recent US arms sale to Taiwan. Will this make it more difficult to get China on board when it comes to addressing the North Korean threat?

Manning: I am not that worried about the Taiwan deal because it was a relatively modest arms package. It was one that [former US President Barack] Obama had punted on and Trump didn’t have a choice. The Chinese had a proportionate response in their opposition to it, but they still don’t want a nuclear North Korea.

US sanctions on Chinese banks and front companies should be accelerated. The Chinese have told big Chinese banks to get rid of North Korean accounts. So, we are looking at relatively small Chinese companies mostly near the North Korean border. The Chinese will make pro forma complaints, but I think Xi will be able to live with the situation. Don’t forget, China has been the number one enabler of North Korea, so I don’t think it has got much of a defense.

Q: President Trump has criticized China for failing to do more to pressure North Korea on its nuclear program. What can he do to change China’s calculus?

Pavel: Among other things, the president can show China a list of the major military enhancements that the United States, Japan, and South Korea will develop and deploy to counter the new threat.

If China doesn’t like THAAD, a missile defense system, and I emphasize the word defense, then China really won’t like a robust, comprehensive list of many more military systems that aren’t purely defensive. That will motivate the Chinese leadership, in particular the [Chinese People’s Liberation Army], to move more structurally to constrain, reduce, and eliminate the accelerating North Korean nuclear and missile threats.

Xi has great disdain for the North Koreans. I think the Chinese are willing to go further than they have gone before. We’ll see what kind of sanctions come out of the UN Security Council. That will be one measure of how far China is willing to go.