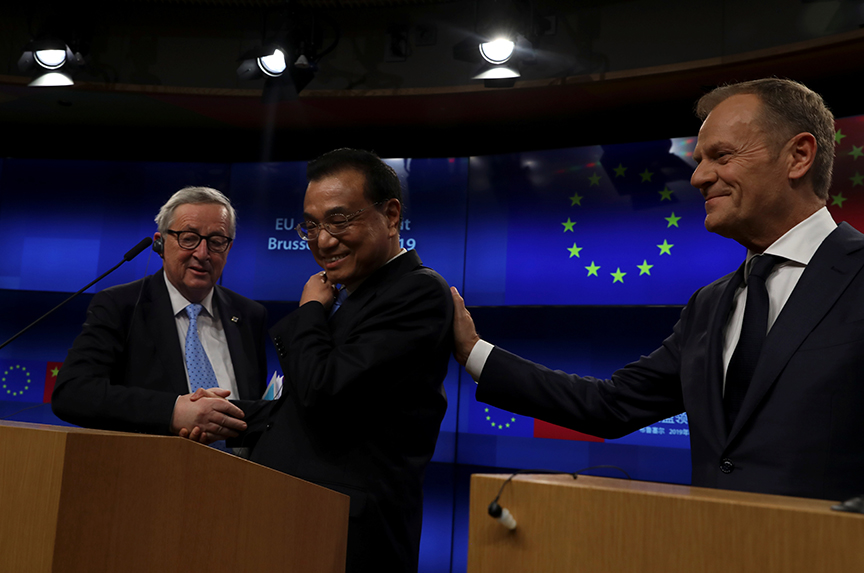 The European Union and China on April 9 agreed to strengthen their trade relationship, cooperate on WTO reform, widen market access, and not force businesses to hand over their intellectual property— the last a longstanding complaint of foreign investors in China.

“We managed to agree a joint statement which sets the direction for our partnership based on reciprocity,” Tusk said.

Notably, progress was made on the issue of force transfer of technology — a key concern for both EU and US officials.

In March, Chinese lawmakers approved a law that bans the forced transfer of technology and illegal government “interference” in foreign businesses.

In their joint statement after the summit, the EU and China said: “Both sides agree that there should not be forced transfer of technology.”

The meeting took place less than a month since a European Commission report described China as a “systemic rival” and an “economic competitor.”

In its report, “EU-China: A Strategic Outlook,” the European Commission notes: “China is, simultaneously, in different policy areas, a cooperation partner with whom the EU has closely aligned objectives, a negotiating partner with whom the EU needs to find a balance of interests, an economic competitor in the pursuit of technological leadership, and a systemic rival promoting alternative models of governance.”

“This requires a flexible and pragmatic whole-of-EU approach enabling a principled defense of interests and values,” the report said.

It went on to suggest that the EU’s response be based on three objectives:

“Neither the EU nor any of its Member States can effectively achieve their aims with China without full unity,” it added.

Last month, Italy became the first member of the G7 to sign on to China’s Belt and Road Initiative, a massive infrastructure project; it did so despite opposition from EU member states and the United States.

We asked Atlantic Council experts for their analysis on the EU-China trade relationship and the summit in Brussels. Here’s what they had to say:

“The statement out of the EU-China summit appears to reflect a bilateral trade relationship in transition. While each is contending with a US trade policy that is more challenging than ever before, the EU increasingly shares compelling interests with the United States to confront China on several of the fundamentals of its economic policies. That said, it is not clear that the EU and the United States have a shared game plan to achieve changes in China’s subsidies to state-owned enterprises and forced tech transfer policies.

“The continuing tensions in the US-EU trade relationship do not make that task any easier, although the announcement on US plans to retaliate in response to the WTO’s findings on Airbus subsidies is not substantially different from past WTO-sanctioned retaliation (e.g., beef hormones), except with respect to the much larger scale of the commercial interests involved.

“We should expect the United States and EU, along with Japan and perhaps others, to intensify discussions on next collaborative steps, particularly in the WTO, to seek long-term changes in Chinese practices.”

“The post-summit joint statement illustrates well Europe’s accelerating pivot to its east. Given the growing number of significant strategic differences between Europe and its traditional transatlantic partners in the United States and the United Kingdom, the pivot is both logical and predictable.

“The post-summit statement consistently positions Europe on a potential collision course with the United States over crucial issues like Chinese 5G technology, steel subsidies, and the JCPOA regarding Iran.

“The renewed trade war today between the United States and the European Union regarding airline sector subsidies seems likely to overshadow whatever progress might be made in areas where European interests align with those of the United States (intellectual property protections, non-discriminatory inward investment into China, compliance with WTO rules and other international standards).”

“The key word is ‘reciprocity.’ One benefit of the current US trade policy is that it had prompted the EU and China toward a closer — and balanced — relationship. (As well as prompting the EU to cement free trade agreements with Japan and Vietnam).

“The whisperings of other EU members vis-à-vis Eastern European countries regarding their closer collaboration in the BRI post-European sovereign debt crisis — and latterly Italy and Portugal — can be harnessed into a positive direction with proper terms of dialogue, and aligned goals, on China.

“Despite all of Europe’s woes, and China’s trade-induced wobbles, there is still much to be gained on both sides. Unfortunately, it is to America’s loss.”

“It is a good time to be China. China’s strategy to gain influence in Europe is steadily growing with Italy partnering with China’s Belt and Road Initiative last month being a prominent example.

“The EU is working together with the United States and Japan at the WTO level to counter Chinese unfair trade practices and for the first time has spoken of China as a ‘systemic rival’ in certain aspects.

“But the EU is keen on having allies against the United States’ departure from multilateral approaches in both trade and climate. We can expect this to only be intensified after the strategic announcement [on April 8] of the United States’ intent to impose more tariffs on Europe. The bottom line is that China wins from a divided transatlantic alliance.”