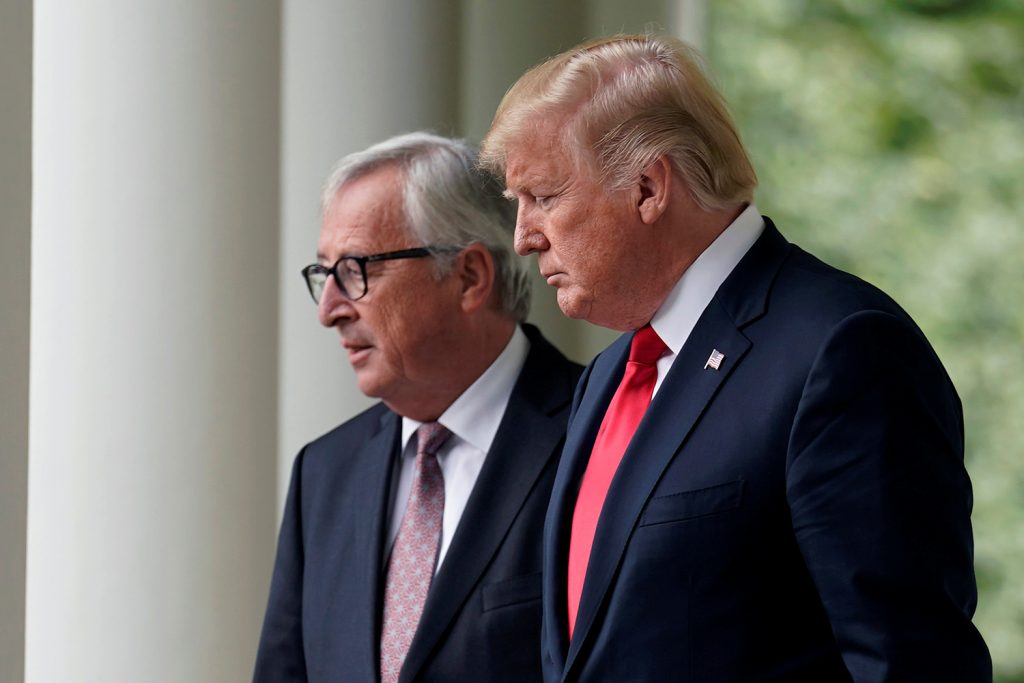 Two years ago, President Trump welcomed European Commission President Jean-Claude Juncker to the White House to face off escalating trade tensions. Instead of sparring, as many had predicted, they greenlighted a blueprint for fresh negotiations. But where are we two years on? Data, tax, and WTO disputes have taken center stage, while many of the traditional standoffs remain untouched. Four experts discuss what has and hasn’t changed, and how to keep momentum behind this fundamental, yet troubled project. Read the other pieces by Julia Friedlander, Marie Kasperek, and Bart Oosterveld.

When US President Donald J. Trump and then European Commission President Jean-Claude Juncker wrapped up their White House summit on July 25, 2018, their joint statement said some hopeful things about transatlantic trade, but it’s most actionable item concerned China and intellectual property. While progress on protecting intellectual property since the summit has been disappointing, it still provides a compelling opportunity for the United States and Europe to join forces to protect this key economic freedom.

The joint statement started with a plea for zero tariffs, zero non-tariff barriers, and even zero industrial (non-automotive) subsidies. There was a nod to “strategic cooperation” on energy, and the promise to start a “dialogue” on smoothing out differences in standards. These are big issues, especially given the absence of any progress on the Trans-Atlantic Trade and Investment Partnership (TTIP).

Penning these three objectives wasn’t surprising. Writing down the fourth one was. The United States and the EU agreed to “join forces” to reform the World Trade Organization (WTO), and stop the “unfair trading practices” concerning intellectual property and forced-technology transfer, in particular. In other words, Washington and Brussels were going to do something about China.

Heading into the summit, both the United States and EU had filed promising cases against China at the WTO. The US case was broadly about intellectual property, while Europe’s targeted forced-technology transfer. Together, the cases sent a message to China, and the rest of the WTO membership, that ideas-based trade would be defended.

The alliance didn’t last. The US case was paused after the panel was composed, whereas Europe’s case never got beyond consultations. No mutually agreed solutions were notified. For whatever reasons these cases weren’t pursued, but the unity around this issue Washington and Brussels displayed in 2018 still holds promise today

Trump has not been enthusiastic about championing intellectual property. But protecting ideas-based trade presents a unique opportunity for him to do two things. First, it’s a way to create some political goodwill with Brussels and jump-start TTIP negotiations. Unless the United States signs TTIP, the US-Mexico-Canada Agreement (USMCA) will facilitate inversions. US firms, for example, will have an incentive to go Canada or Mexico, sell to the EU under preferential terms, given these countries’ free trade deals with Brussels, and still sell back to the United States at zero tariff by virtue of USMCA. In short, the US needs TTIP.

With US-EU tensions over the Boeing-Airbus subsidies issue, Section 232 tariffs on steel and aluminum, and other disputes, intellectual property would put them on the same side of a trade issue, one that matters more for both economies than tariffs.

Second, raising intellectual property would help the Trump administration broaden out its criticisms of China beyond tariffs, setting the stage for making demands of WTO reform that could win wider support. Forced-technology transfer was the original impetus for Washington’s Section 301 tariffs against China. Europe’s case in 2018 is a good template, and the EU can be an indispensable ally in this fight.

The joint statement also called for US and EU efforts to counter industrial subsidies and state-owned enterprises, issues often raised in the context of reforming the WTO to better deal with China. Rallying around intellectual property, however, should be the short-term priority, in that, regardless of WTO reform, Washington and Brussels can shape the look of modern trade accords by making TTIP the gold standard for protecting ideas.

The Trump-Juncker summit tapped a theme that was important in 2018, and is more so in 2020: the need for the United States and EU to “join forces” on trade. There is much to be done in this regard, but starting with intellectual property makes good economic and political sense.

Image: US President Donald Trump and President of the European Commission Jean-Claude Juncker walk together before speaking about trade relations in the Rose Garden of the White House in Washington, US, July 25, 2018. REUTERS/Joshua Roberts