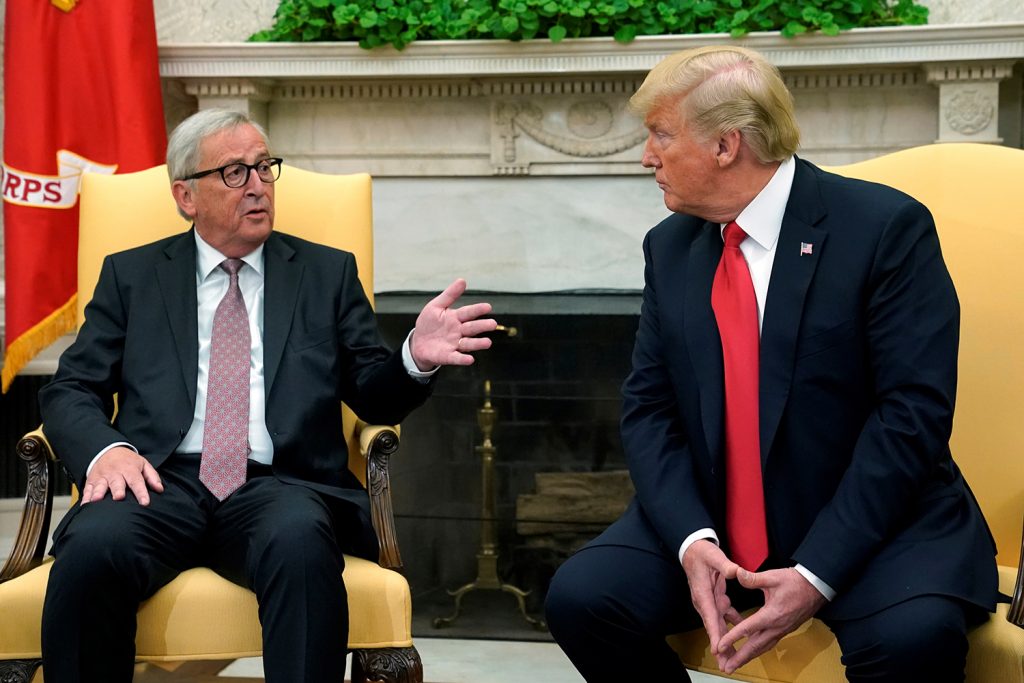 Two years ago, President Trump welcomed European Commission President Jean-Claude Juncker to the White House to face off escalating trade tensions. Instead of sparring, as many had predicted, they greenlighted a blueprint for fresh negotiations. But where are we two years on? Data, tax, and WTO disputes have taken center stage, while many of the traditional standoffs remain untouched. Four experts discuss what has and hasn’t changed, and how to keep momentum behind this fundamental, yet troubled project. Read our other three pieces by Marie Kasperek, Marc L. Busch, and Julia Friedlander.

Two years after the summit between European Commission President Jean-Claude Juncker and US President Donald J. Trump temporarily halted an escalating tit-for-tat on trade matters, it is worth looking a few years out into the future on the prospects for real progress in the transatlantic trade relationship. Talks since the summit have been limited and any success has been due to a realistically low level of ambition. The two sides reached an agreement on beef trade, but otherwise have little else to show for two years of discussions.

On the EU side, a picture is emerging of two foreign policy paths: one in the case of Trump’s reelection, the other in case of a Biden presidency. In the past weeks, EU leaders have strategically delayed key decisions to early 2021—see the recent delay on digital taxes. With an EU Commission focused on geostrategic issues, relationships with a second term Trump administration will be tense, though there could be some collaboration on addressing China’s trade practices. With a Biden administration, more conventional diplomatic dialogue would return and deepening of aspects of the trade relationship would be possible.

Regardless of the occupant of the White House, three topics will loom large in the next few years in trade and other bilateral discussions.

The first is China. Like the United States, the EU is concerned with the country’s horrid trade practices but also with the disruptive strategic position China is building within the EU through its Belt and Road Initiative investments. A Biden presidency would continue a tough public diplomatic stance on all aspects of the China relationship and is for example unlikely to change direction on Huawei. The EU’s stance is limited by commercial interests of especially German companies in China, which leads Germany to take a cautious approach in its dealings with Beijing. On trade matters, a reinvigoration of the tri-lateral Japan-EU-US efforts to combat China’s theft and cheating would be the most likely path during a Biden presidency.

The second topic is big tech. The EU and the United States disagree on how to deal with the oligopolies of the new economy on almost every policy topic, from privacy concerns, industrial organization and regulation, and tax. Just last week, the European Court of Justice dismissed the legal basis for data transfers between the EU and the United States. Among many other topics, the high-profile role of Facebook and other companies in election interference will inevitably lead to more pressure in the EU to break big tech companies up, induce competition, and/or limit their access to the data of EU citizens. It is also hard to envision the EU Commission approving further mergers in the sector that affect data and privacy of EU citizens. This topic will be a source of tension no matter who wins the US presidential election.

Finally, there is climate change. A Biden administration can be expected to re-join the Paris climate accord, but it worth noting that the EU has over the past few years moved to deepen its commitment to achieving the accord’s targets. The transformation to a greener economy was a cornerstone of the recently approved coronavirus economic recovery package, for example. There is no political appetite in the EU for lowering environmental or food safety standards in return for favorable trade terms. In the parlance of those who follow this topic closely: US-produced chlorinated chicken or beef with growth hormones will not make it into the EU.

Image: US President Donald Trump meets with European Commission President Jean-Claude Juncker in the Oval Office of the White House in Washington, US, July 25, 2018. REUTERS/Kevin Lamarque