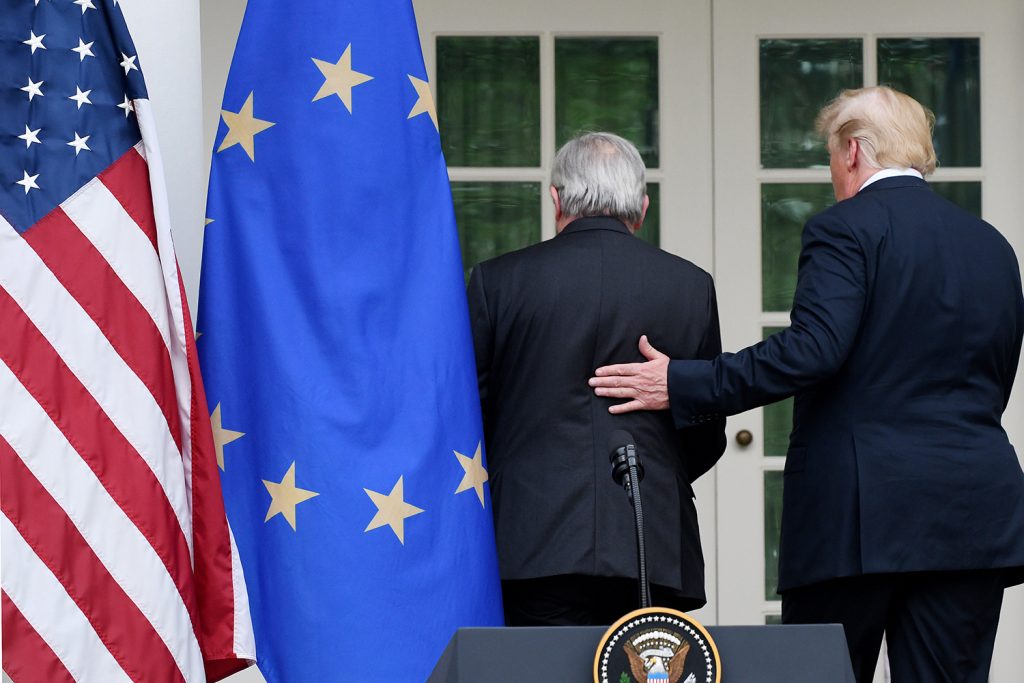 Two years ago, President Trump welcomed European Commission President Jean-Claude Juncker to the White House to face off escalating trade tensions. Instead of sparring, as many had predicted, they greenlighted a blueprint for fresh negotiations. But where are we two years on? Data, tax, and WTO disputes have taken center stage, while many of the traditional standoffs remain untouched. Four experts discuss what has and hasn’t changed, and how to keep momentum behind this fundamental, yet troubled project. Read the other pieces from Bart Oosterveld, Julia Friedlander, and Marc L. Busch.

One important element of the “Rose Garden Deal” between US President Donald J. Trump and European Commission President Jean-Claude Juncker two years ago was an agreement to work together on the reform of the World Trade Organization (WTO). While there was initial progress, transatlantic cooperation on reform has fizzled out. Contrary to the transatlantic aspirations in the summer of 2018, there is now less cooperation, more setbacks, and a bleak outlook for at least the rest of 2020.

Established in late 2017 to lead WTO reform and fight non-market-oriented policies and practices of third countries, the trilateral working group, consisting of the United States, the EU, and Japan, proceeded in line with the spirit of the July 2018 Rose Garden Deal. However, after several positive meetings over the course of the past two years, the working group has been notably stagnant (at least publicly) since its last meeting in January. While the world is understandably occupied with the economic fallout of COVID-19, it is even more important in times of economic uncertainty to advance reforms of the WTO and reverse market distorting policies.

Yet transatlantic cooperation on WTO reform had fizzled out long before the pandemic—and political leaders are not likely to revitalize it any time soon. Here are three reasons why:

The first is the Airbus versus Boeing case at the WTO over unfair subsidies to the two companies by the EU and the United States, respectively. While the dispute between the EU and the United States has been drawn out for over a decade, the WTO recently ruled the EU’s subsidies of Airbus illegal and allowed the United States to impose tariffs on billions of dollars’ worth of EU goods. Instead of settling the dispute, it escalated to a vendetta of Trump versus Europe, with the EU bracing to fight back as soon as they receive the WTO’s final ruling on countermeasures against the United States’ unfair subsidies to Boeing later this summer. The case threatens to further damage transatlantic relationship in the near future, while also reinforcing Washington’s criticism that the WTO is too slow and ineffective.

Further strife stems from the US blocking appointments of new judges to the WTO Appellate Body, an integral part of the WTO’s Dispute Settlement System, rendering the body non-operational in late 2019. In an effort to put the system on life support and uphold a two-step dispute settlement system, several WTO members formed an interim appeal arrangement. While China is a part of the interim solution, the United States has unsurprisingly opted out—putting another damper on the spirit to find a joint solution.

Lastly, the announcement by WTO Director-General Roberto Azevêdo of his departure in May, more than a year before the end of his term, put reform efforts on hold. The bi-annual WTO ministerial meeting in June that could have produced decisions on reforms has been postponed to next year. Now instead of making substantive decisions, the body is occupied with finding a new leader.

This is only one of two nominations this year that have the power to impact the revival of transatlantic reform efforts. At least equally important are the US presidential elections in November. While both presidential candidates are expected to be tough on China, we can expect their approach to the WTO to be very different: A believer in multilateral cooperation, Joe Biden will likely push for joint WTO reform (possibly by reviving the trilateral working group) but is unlikely to continue to block appointments to its appellate body. If Trump were to be reelected, he will likely continue to threaten to leave the WTO altogether as part of a negotiating strategy.

Mirroring the lead-up to the Rose Garden Deal, transatlantic cooperation on WTO reform is once again stuck in a holding pattern, until the new WTO chief is elected, the US elections are over, and potentially until the next WTO Ministerial next summer. Unless the United States and EU can take meaningful action sooner, China will gladly fill the void.

Marie Kasperek is a nonresident senior fellow with the Global Business & Economics Program and director of the Institute of International Economic Law at Georgetown University.

Image: US President Donald Trump (R) and President of the European Commission Jean-Claude Juncker, walk back to the Oval Office after a press conference in the Rose Garden at the White House July 25, 2018 in Washington, DC. Photo by Olivier Douliery/ Abaca Press