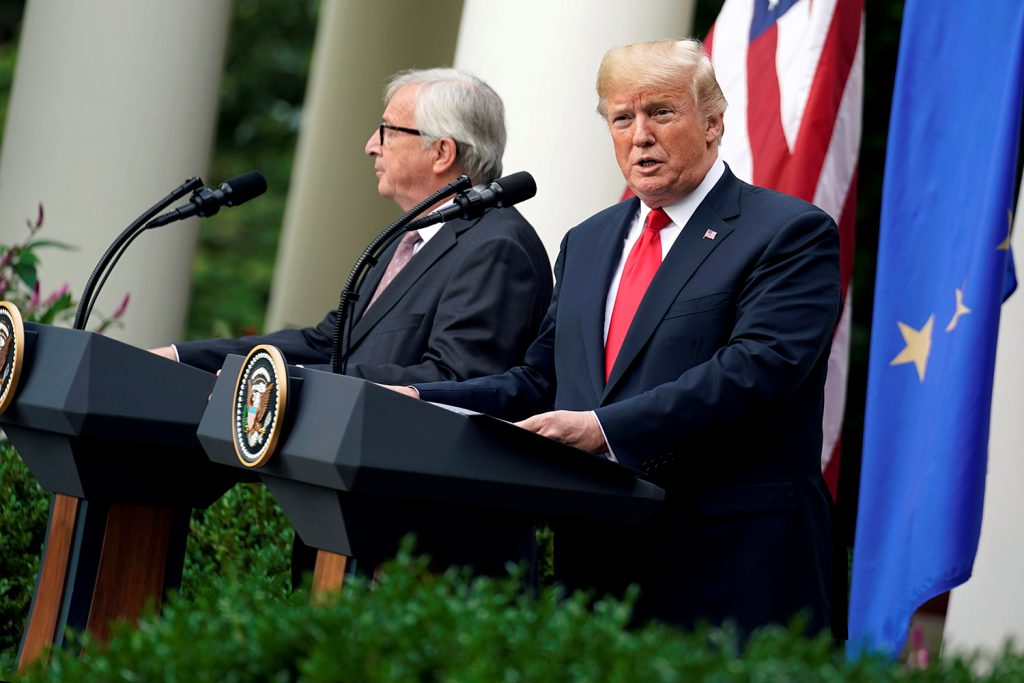 US President Donald Trump and President of the European Commission Jean-Claude Juncker speak about trade relations in the Rose Garden of the White House in Washington, US, July 25, 2018. REUTERS/Joshua Roberts

Two years ago, President Trump welcomed European Commission President Jean-Claude Juncker to the White House to face off escalating trade tensions. Instead of sparring, as many had predicted, they greenlighted a blueprint for fresh negotiations. But where are we two years on? Data, tax, and WTO disputes have taken center stage, while many of the traditional standoffs remain untouched. Four experts discuss what has and hasn’t changed, and how to keep momentum behind this fundamental, yet troubled project. Read the other pieces by Marie Kasperek, Bart Oosterveld, and Marc L. Busch.

Two years ago, US President Donald J. Trump welcomed then President of the European Commission Jean-Claude Juncker to the White House to face off escalating trade tensions between Washington and Brussels, and ultimately to call a truce. It was an interesting sell for staffers on both sides of the Atlantic. US officials argued that ultimately the best thing to do was get the two in a room together to hash it out and give negotiators a fresh mandate after the Transatlantic Trade and Investment Partnership (TTIP) had fizzled and the US president threatened tariffs on automobiles—a cleverly identified Achilles heel for European exporters. For those of us in the Rose Garden that day, watching with disbelief as the two leaders delivered a hastily assembled joint statement that set us on the road to new talks, there was a giddy sense of relief but also a long sigh of recognition—our work would never be as easy as getting Trump and Juncker to kiss.

In his recent address at Chatham House, US Trade Representative Robert Lighthizer criticized the EU for negotiating seventy-seven individual trade agreements globally, promulgating European and not internationally arbitrated standards. Whether you believe the EU is justified in doing this is a matter of opinion, but what was more striking in this comment was not the criticism of Brussels, but what that number revealed about the transatlantic dilemma. Europe can take home ancillary prizes but the golden goose—an agreement with the United States—remains out of reach.

TTIP grew too big for its britches because of the sheer scope of the negotiating mandate, as experts and politicos set aside the prospect of a narrower agreement in the glow of the moment. But the rhetoric went even further. The United States and the European Union are a community of values—transparency, democracy, open markets—”so there is no reason why we can’t reach agreement,” officials repeated, and “this should be the easiest thing.” It’s time to turn this argument on its head and manage expectations. Moving forward, let’s acknowledge that this is one of the hardest and most nuanced negotiations out there.

The United States and the EU are nearly equal sized markets and are competitors. In many sectors they are near perfect competitors—witness the Airbus-Boeing standoff playing out in real time—meaning there are fewer comparative advantages available to make concessions worthwhile. To take an easy example, let’s wager that both the United States and the EU want to import cheap textiles from Vietnam, and not from each other. Previous negotiations had gotten most tariff lines to zero, but the going gets tough on standards and regulation. Washington and Brussels each present two sophisticated and advanced regulatory frameworks, with equal claim to fairness and transparency, and an equally long list of the other’s transgressions. Geopolitics aside, it’s hard to see, by analogy of game theory or just a chess board, why either would give way.

But where can we show some leg? Tax and state aid. Let’s try and give an optimistic case for both.

Finance ministries have a way of getting along even while fighting. Like lawyers, economists like to exchange friendly fire over principle. The Trump administration’s sweeping tax reform caused many in Europe to bristle, not over politics but out of jealousy that the United States could push corporate rates through a glass floor. The OECD negotiations on digital taxation—derailed just as much by Congress as the coronavirus—will continue despite USTR’s bullseye on French wine. The European Court of Justice’s rejection of the Commission’s case against Apple last week is a lob into America’s court. Brussels had wrongly presumed that a proxy battle with a US tech company could lay a stake in EU tax harmonization because taking on Ireland would never survive a veto by the same. There is also reason for optimism that individual EU member states introducing autonomous regimes at the promise of quick windfall will see their efforts backfire, especially as tech holds up a greater percentage of the corona-economy. The companies themselves have stopped trying to ax the concept and are now, reasonably, lobbying for clarity.

One of the greatest parries on the regulatory front surrounds state aid and public procurement, an unforgiveable irony for two trade blocs waving the free trade flag. The United States has cleverly funneled sponsorship for technology innovation and heavy industry through defense budgets, and the Buy America Act, according to Brussels, is not even thinly veiled protectionism. Meanwhile, Washington maintains a longstanding bugaboo over Europe’s direct subsidies to key industries such as agriculture and manufacturing. In this area, both are equal sinners with constituencies that won’t take changes lightly. But things are moving. First, the coronavirus has shifted conversations on both sides of the Atlantic on what it means to be competitive to include structural changes within our economies. If the United States needs to introduce comprehensive unemployment insurance and a viable option for universal public health care, the European Union is learning the hard way (at the recent EU Summit for example) that fiscal heterogeneity is a lasting and dangerous holdover from the eurozone crisis.

Second, a parallel agenda in negotiations with China will eventually force a convergence of interests and tactics. Phase 2 of the proposed negotiations (when and if it starts) between Washington and Beijing, which should cover subsidies for state-owned enterprises, sounds a lot like the draft EU-China Investment Agreement (when and if those negotiations resume). The Capital Markets Working Group, comprised of US agencies examining the behavior of Chinese corporates in US markets, sounds like the EU’s recently amended competition policy, which requires third party participants to adhere to the rules of the Single Market. “Why are we going after each other when we need to go after China together?” is a common lament of the past years. On a hot, sticky July day in Washington, this author is cautiously optimistic that this convergence will occur in time to avoid irreparable damage to the global economy.

In the meantime, Brussels and Washington will chip away at the cracks in the areas identified two years ago in the Rose Garden. BusinessEurope’s excellent publication from this month provides an exhaustive list of a positive US-EU trade agenda. US and EU leaders don’t need to kiss (please don’t!), but they do need recognize that fair competition, alongside cooperation, is the ideal that our institutions dare to uphold.