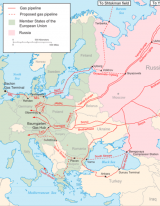 “European countries from Germany and Poland to Italy and Turkey now need to ensure they have emergency plans in place to deal with a possible cut-off of Russian gas supplies,” Atlantic Council Senior Fellow John Roberts writes in an essay. As new violence erupted this weekend in eastern Ukraine, Roberts notes that a swath of Europe stretching southeast to Turkey gets about 20 percent of its gas from Russia via Ukraine, and a cluster of countries in southern and eastern Europe are especially dependent on the pipelines through Ukraine.

“Bulgaria, Croatia, the Czech Republic, Hungary, Romania, Slovakia and Slovenia – together with some non-EU states like Serbia and Macedonia, rely on Ukrainian-transited Russian gas for about three-quarters of their total supplies,” Roberts says. Italy also would be hit hard by any halt in Russian gas via Ukraine, which formed more than a third of its total consumption last year. (One of Italy’s other main suppliers, Algeria, has reduced its exports following last year’s attack on a critical gas plant by al-Qaeda-backed terrorists.)

The new assaults this weekend on Ukrainian police and government centers by Russian-backed gunmen underscores that the crisis has grown so acute that any number of events could trigger a cut-off in Russian gas pumped through Ukraine. Ukraine’s interim government says it fears an overt invasion by a Russian force poised near Ukraine’s border. And a dispute is growing between the two countries over Russia’s pricing and Ukraine’s unpaid bills for gas.

While the Russia-Ukraine conflict directly threatens a disruption of supplies piped through Ukraine, it poses a secondary risk to Russian gas supplies that reach Europe through other pipelines. These include the Nord Stream system, which feeds Germany and other countries via the Baltic Sea; the Yamal-1 pipeline via Belarus to Poland; and Blue Stream, a pipeline that stretches under the Black Sea to Turkey.  “Russia has shown a readiness to use gas cutoffs as a weapon and could disrupt these supplies to retaliate for European support of Ukraine in the current crisis,” Roberts notes.

“The underlying problem is that, right now, Moscow is involved in too many disputes with Kyiv to make it possible to envisage Russian gas flowing smoothly across Ukraine,” he writes.