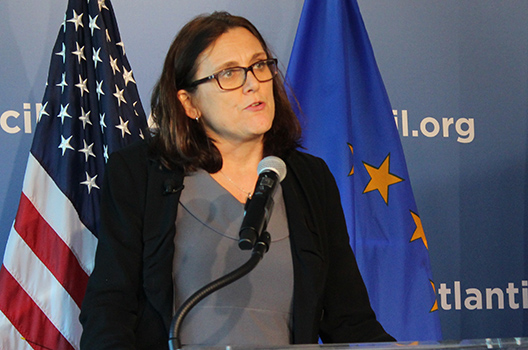 A multilateral effort needs to be made to save the World Trade Organization (WTO), the European Union’s Commissioner for Trade Cecilia Malmström said at the Atlantic Council in Washington on January 10, noting that the twenty-four-year-old intergovernmental body to regulate international trade is “under increasing pressure.”

“So we need to save it,” Malmström said, warning “it is quite urgent.”

Malmström spoke following a January 9 trilateral meeting in Washington between US, Japanese, and EU trade officials to discuss reform plans for the WTO. The effort was the fifth of its kind and was born out of an initiative started by the respective trade ministers on the sidelines of the G20 summit in Buenos Aires late last year. At the presidential level, the desire to reform the WTO was reiterated in a July 25 joint statement between US President Donald J. Trump and European Commission President Jean-Claude Juncker, which included European promises to import more US soybeans and liquefied natural gas, but also mentioned that both sides would “work closely with like-minded partners to reform the WTO.”

Trump promised in July not to place additional tariffs on the EU as long as negotiations for a larger free trade deal were still ongoing. By autumn 2018, however, the Trump administration had grown impatient with negotiation progress, with US Commerce Secretary Wilbur Ross saying on October 17 that “the president’s patience is not unlimited.”

Malmström responded at the time that US officials had yet to prepare for negotiations and that “the ball is in their court.” On January 10, Malmström pushed back on reports that talks were stalling, saying there has been “constant work; we are really not resting after that meeting in July.”

The Trump administration’s frustration has reportedly caused US officials to prepare new tariffs on EU automobiles should talks continue to sputter. Malmström said that the EU expects that it would be exempt from any new tariffs the US places on foreign car imports. When asked if Brussels would consider implementing a quota on its automobile exports to the United States to avoid tariffs, Malmström responded: “No, we wouldn’t.”

Malmström met with US Trade Representative Robert Lighthizer on January 8 and January 10, and while she did announce that the EU is ready to begin negotiating an industrial goods trade agreement with the United States, Brussels will not allow agricultural goods to be discussed.

Malmström maintained that “industrial goods is what was discussed in the White House in July— that is where we see we can make quite quick progress and results.” She also appeared to distance herself from Trump’s stated July 2018 desire to pursue a “fair trade deal,” arguing that “there does not have to be one final package where we solve all the problems,” but rather “stages” of successes on specific areas of low-hanging fruit.

Malmström remains confident that Washington and Brussels can continue to work together. “The US and the EU have always been partners,” she said. “We want to maintain that relationship, but also work together to face the joint challenges of the 21st century.”

As the Atlantic Council’s Global Business and Economics Program nonresident senior fellow Barbara C. Matthews explained, the EU has sent strong signals of its willingness to play ball with Washington by releasing new data showing the increase in European purchases of soybeans since the July Trump-Juncker statement and its decision to seek WTO authorization to extend steel import restrictions to all of its trading partners for three years.

This last effort, Matthews argues, is aimed squarely at China, whose product dumping and unfair trading practices are fueling the European, Japanese, and US desire to reform the WTO.

In his address to the United Nations General Assembly on September 25, 2018, Trump said in thinly veiled comments aimed at China: “countries were admitted to the World Trade Organization that violate every single principle on which the organization is based.”

“While the United States and many other nations played by the rules, these countries use government-run industrial planning and state-owned enterprises to rig the system in their favor. They engaged in relentless product dumping, forced technology transfer, and the theft of intellectual property. The United States lost over three million manufacturing jobs, nearly a quarter of all steel jobs, and 60,000 factories after China joined the WTO,” he said.

The EU is focused, Malmström said, on “how we can find a way to make sure that China [increasingly] plays by the rules.” To achieve that “systematic change” in China’s behavior, Malmström argued, you “need global rules” that only the “best system we have for open border trade”—the WTO—can provide.

Through their trilateral reform effort of the WTO, Malmström said, Japan, the United States, and the EU can give the organization the tools needed to “achieve systemic change that is enforceable and long-term sustainable.”

In December 2018, however, the United States rejected the EU’s Appellate Body proposals. “With respect to the proposal advanced by the European Union, China, and India, it is hard to see how it in any way responds to the concerns raised by the United States,” Deputy US Trade Representative Dennis Shea said in prepared remarks seen by Bloomberg.

The Trump administration, in a bid to force WTO reform, has blocked new appointments of judges to the Appellate Body and Trump has even threatened to withdraw the United States from the WTO.

The EU and the United States “have not exactly agreed” on Appellate Body reform yet, Malmström conceded. She expressed her desire, however, that “the US will stop blocking the appointment of arbitrators, because if that does not happen sometime in late fall, there will be no Appellate Body. There are only three judges left… If anything happens to one of them, it ceases to exist.”

“The Appellate Body is not perfect,” Malmström admitted, but “that’s why we have made concrete proposals to improve it. If the WTO is going to be effective, it needs to have credibility.” She also pointed out that the dispute resolution mechanism “has been good for the US. The US has been winning most of the cases in the Appellate Body.”

Malmström was clear that there is a real risk that the WTO could fail if significant action was not taken this year. “Without the WTO, there are no rules,” she said. “International trade without the WTO would be anarchic. Countries would be bullied, companies would fall victim to unfair practices—there would be no reliability, no stability. So we need to repair and stand up for the system.”

In a veiled reference to the frustrations of Washington, Malmström continued, “some suggest that closing is a good option—to redirect investment and wealth back towards their own countries. That will not work. Even if it did, they would sacrifice two things: First, their values… Second, their connection to the world.”