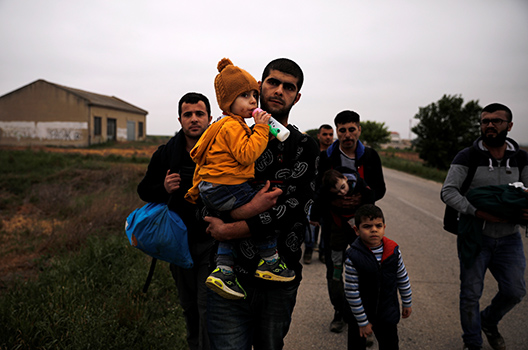 Syrian refugees from Afrin who crossed the Evros river, the natural border between Greece and Turkey, walk on the road at the village of Nea Vyssa, Greece, May 2, 2018. Picture taken May 2, 2018. (REUTERS/Alkis Konstantinidis)

While the story of 3.5 million Syrian refugees pouring into Turkey and the European Union has captured the world’s attention in recent years, those displaced souls weren’t the first to flee war, tyranny, and oppression, and they won’t be the last. With inhospitable temperatures across North Africa and Central Asia, constant war and conflict in Middle East hot spots, and the advance of authoritarian regimes, today’s refugees don’t represent a temporary conundrum, but rather a new normal of European life.

This was the consistent message during my recent trip through the Atlantic Council’s Millennium Fellowship to the migrant-heavy region spanning from Gaziantep, Turkey, just thirty miles from the Syrian border, to the coastal escape of Çeşme on the Aegean Sea, to the Greek island of Lesbos, a major transit point for asylum seekers, and then to the country’s capital itself, the birthplace of Athenian democracy. High-level government officials, non-governmental organization leaders, and citizens repeated the refrain: there’s no end in sight to the mass influx. For instance, even if the Syrian war ended tomorrow, whether through negotiated solution or the forced removal of Bashar al-Assad from power, the problem will persist for decades to come.

For this reason, use of the word “crisis” was discouraged in every location we visited, and with every host with whom we communicated. We were told the crisis was one of invention, not of reality. The challenge, the line of thinking goes, is that this is not a humanitarian, economic, or security concern, but rather a political dilemma that requires a political solution. For some, that solution is using refugees as a scapegoat to exact electoral victories across the European continent; while for others, the solution is something more constructive and lasting.

And the next crisis, in whatever form it comes, won’t be a crisis either. It will simply be the next wave of a reality that has befallen Europe for decades. For instance, during and following World War II, an estimated 50 million people fled their homes to take up residence elsewhere in Europe, the Americas, and the Middle East. This phenomenon was iconically captured in the 1942 classic Casablanca, which was, at its heart, about refugees stuck in a cosmopolitan purgatory on their eventual way to the United States.

Then again, in the 1970s, upwards of 200,000 Greek and Turkish Cypriots were displaced following a Turkish invasion of the island. The Balkan wars of the 1990s sent another 2 million deeper into Europe, while also displacing 2 million internally; and now Syria, with a war in its eighth year, and other Middle Eastern and African nations such as Eritrea, are the latest sources of refugees.

To be sure, the new normal is not necessarily a bad thing. In fact, it could be a positive development. Europe is an aging continent with a median age of 42.9 years old, according to the CIA World Fact Book, and a fertility rate of 1.6, based on data from Eurostat (only eight countries outside of Europe have a higher median age than the EU as a whole). These staggering statistics make maintaining population growth nearly impossible without the help of migration.

But the dire predicament that Europe faces right now is not the flood of people, but the lack of political will. Already, the leaders of the EU, the true migrant magnet, and Turkey, the geographic buffer zone, are fatigued. German Chancellor Angela Merkel, the European continent’s champion of refugees, faces a heavy contingent of resistance within her own country. Regardless, the future of European security, economic growth, and political clout is at stake, and addressing the situation is a necessary endeavor. Why? Economic growth is tied to population growth as much as it is to innovation and technological advancement, and can help lift people out of poverty and improve living conditions. Similarly, population also equals clout on the international stage. The largest countries, by virtue of density alone, earn a bigger voice in debates. If Europe allows itself to shrink in numbers, its sway will subside, too.

In order to reach an effective political solution, European leaders must galvanize support among their constituencies to develop long-term strategic policies that are beneficial to all. That may take one of any number of forms, including closed borders or severing services, as some countries have proposed and implemented, or doing as Turkey and Germany have done and welcoming one and all with the promise of shelter and subsidence.

No matter the avenue taken, an issue of this scale and magnitude, and affecting so many facets of life and society, will undoubtedly require burden sharing among all involved. Unless every nation has at least some skin in the game, and some vested interest in the outcome, Europe’s days as a major international force may be numbered.

So, while the worst of the present “crisis” may mostly be behind us, the next phase of the new normal is coming ashore. And it’s up to Europe—all of Europe—to determine its collective destiny.

Pete Seat is a former White House spokesman for US President George W. Bush, as well as former US Sen. Dan Coats, who now serves as Director of National Intelligence. He is also an Atlantic Council Millennium Fellow. You can follow him on Twitter @PeteSeat.