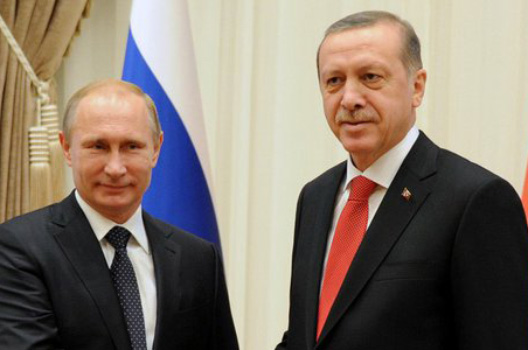 Three recent events in and around Turkey raise concerns about this country’s direction for the United States and its European allies.

Amid Turkey’s arrests last week of dozens of journalists, hopes are fading for any near-term revival of negotiations over Turkey joining the European Union. Negotiations between Turkish and Greek Cypriots also have soured recently over competition for oil and gas reserves in the Eastern Mediterranean. And Russia is offering to build closer ties with Turkey by jointly developing a new natural gas pipeline.

Recent visits to Turkey by the EU high representative for foreign affairs, Federica Mogherini, and by British Prime Minister David Cameron had raised hope within the pro-EU circles here for some new momentum in relations with Europe. The visits came after Prime Minister Ahmet Davutoglu had declared the importance of Turkey’s path to the EU after taking office in August.

But any momentum was reversed December 14 when Turkey arrested more than thirty journalists, TV scriptwriters, and police. Government officials accused the media workers, including journalists with the prominent daily newspaper Zaman, of threatening the state through articles (and a TV soap opera) critical of the government. The arrests came as the government has cracked down this year on what it calls a “parallel state” led by the exiled Islamic cleric Fethullah Gulen.

The European Commission (the EU’s executive arm) immediately declared that “this operation goes against the European values and standards Turkey aspires to be part of.” EU Enlargement Commissioner Johannes Hahn said the arrests were “not really an invitation to move further forward” with Turkey.

President Recep Tayyip Erdoğan responded sharply: “We have no concern about what the EU might say, whether the EU accepts us as members or not, we have no such concern.”

Later in the week, the stall in the EU’s process with Turkey was reinforced when EU heads of state held a summit meeting omitting any reference, to continuing the accession negotiations. The following day, a Turkish court issued an arrest warrant for Gulen, who lives in the US state of Pennsylvania.

Although Turkey’s EU accession negotiations process started in 2005, only fourteen of thirty-five chapters of the required accession agreement have been formally discussed so far. Agreement is stalled on eighteen chapters, in many cases because of the disagreements over the divided island of Cyprus. (After its declaration of independence in 1983, the Turkish Republic of Northern Cyprus, on the northern one-third of the island has been recognized only by Turkey, against the internationally recognized Republic of Cyprus, which is an EU member.)

Political relations between Turkey and the EU cooled further in 2013. Street protests in Istanbul erupted in June against plans to develop the city center’s Gezi Park, and the demonstrations were suppressed violently by police. In December police and prosecutors arrested dozens, including the sons of three cabinet ministers, after corruption allegations and this was followed by bans on social media.

The recent visit by Mogherini, Hahn, and EU Humanitarian Aid Commissioner Christos Stylianides was an expression of good will to meet the new Turkish government’s expressed aim of advancing its accession process. But the visitors’ main objective was to persuade Turkey to work more closely with the international community in the fight against the militant Islamic State of Iraq and al-Sham (ISIS). They sought Turkey’s help in blocking foreign fighters from entering Syria to join ISIS, and in increased intelligence sharing.

Prime Minister Cameron’s visit, the first in four years, also aimed at ensuring Ankara’s closer cooperation in the fight against ISIS, particularly in stopping British jihadists travelling back to the UK through Turkey.

Differences on Syria, Tensions with Cyprus

Yet, the EU and Turkish priorities on Syria seem to differ. While the EU backs the UN-led plan to “freeze” the fighting in Aleppo, Turkey’s main aims are to create a buffer zone in northern Syria along the Turkish border, and see the removal of the Assad regime. Ankara believes that attacking ISIS will not be enough to resolve Syria’s conflict, as it was the Syrian regime that allowed ISIS to grow.

The European officials’ visit came a week after that of Russian President Vladimir Putin. During his visit, Putin announced its abandonment of the South Stream project to pipe Russian natural gas to Europe. He named Turkey its preferred partner for an alternative pipeline. In return, Turkey pushed for a discount on the price of its gas imports from Russia.

An expansion of Turkish ties with Russia is of concern to the US and the EU. Turkey has not imposed sanctions on Russia over its actions in Ukraine and the EU is urging Turkey to do so—or at least not to take advantage of the suspended EU exports to increase its own trade with Russia. During the EU delegation visit, Mogherini said the EU would not be drawn into a battle with Russia for influence over Turkey.

It is important to remember that the Turkey-Cyprus peace talks stopped in October after Cyprus walked out in response to Turkey’s protest against Cyprus’ oil and gas exploration in the Eastern Mediterranean. The proposed new Russia-Turkey pipeline project can also be seen as Turkey’s reaction to feeling frozen out of energy exploration in the Eastern Mediterranean. There, Israel and Cyprus are planning to send gas to Egypt, Greece, and Italy, while bypassing Turkey.

Despite the long stall and the current tensions in the talks over EU membership for Turkey, it remains crucial to sustain the process to ensure that Turkish society has a future with the core European values of freedom, democracy, equality, the rule of law, and respect for human rights.

Pınar Dost-Niyego is based in Istanbul as the associate director of the Atlantic Council’s Energy and Economic Summit.