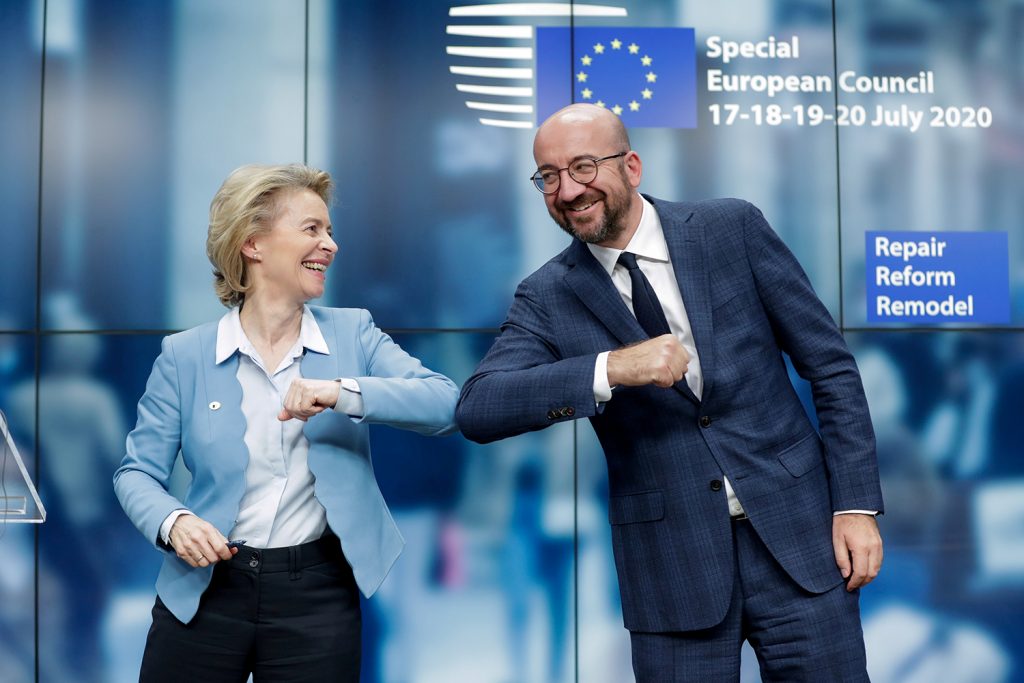 After five days of negotiations, European Union leaders agreed on July 21 to borrow €750 billion jointly in order to recover from the coronavirus economic crisis, while also passing a new €1.074 trillion seven-year budget. A major sticking point in the negotiations was the composition of the proposed coronavirus recovery fund, which the “Frugal Four” of the Netherlands, Austria, Denmark, and Sweden argued should consist of more loans than grants. In the end, the recovery package included about an equal number of both (€390 billion of grants and €360 billion of loans). Despite the lengthy debate and budget cutbacks to win over the Frugal Four, the agreement to borrow the recovery funds jointly marks a major step for the European Union.

Atlantic Council experts react to the July 21 agreement and what it means for the future of the European Union:

Josh Lipsky: The European project is alive and well.

Olivier-Rémy Bel: A compromise that focused on the big picture.

“The agreement is a historic achievement leading to more solidarity in the European Union to respond the economic fallout of the coronavirus. The EU Commission will be able to borrow on financial markets to provide grants (at €390 billion) and loans (€360 billion) to hardest hit countries, an innovation. In addition, the twenty-seven leaders agreed on a €1.074 trillion new Multiannual Financial Framework (MFF), the EU budget.

“This comes close to the initial Franco-German plan, that had been adopted and completed by Commission President Ursula Von der Leyen. The Commission president has done a masterful job in her first crisis in stepping up European ambition to respond to the moment. It is also a personal success for French President Emmanuel Macron who has made deeper economic integration of the EU to withstand shocks a key priority of his presidency. It is also a success of his relationship with Chancellor Angela Merkel who, by embracing the plan, significantly shifted the European balance of power away from the so-called Northern bloc. Will it have lasting consequences in German politics for further eurozone integration schemes? The future will tell. Although this recovery plan is a temporary one, it creates an important precedent, which is the way the EU has often moved forward.

“It took time, in the longest summit in twenty years, it was messy, and sometimes antagonistic. The devil is in the details, and critics will point to the rebates and safeguards granted to the “Frugal” countries. But democracy at twenty-seven is complicated. What will history remember? That after weeks of wobbling, the EU was much quicker and decisive to react to this crisis than the previous one. That the European Central Bank was not left alone holding the ship while Member States defended their short-term national interests (short term because a major economic hit in one country will hit others anyway). This is needed as Europeans face an unprecedented economic calamity, and the effects on unemployment will start to feel as partial employment schemes run out of money. It is also needed because this economic response is also a geopolitical one. A divided EU, leaving its hardest hit members on the side of the road, would provide an easy prey for malicious Chinese investments, as the previous crisis has proven.”

The European project is alive and well.

“This historic agreement is a reminder that the European project is alive and well. Twenty-seven leaders came together and agreed to borrow money as a union and distribute that money as grants to individual member countries. That single step is an extraordinary accomplishment and one that seemed unlikely at the onset of this crisis. There will be two significant stress tests on this deal in the days and years ahead. In the short-term, will any member of the Frugal Four try to hold up money set to be disbursed to Italy or other countries in need? And over the long-term, will these innovations during an emergency lead to lasting change that moves the EU toward a fiscal union?”

Europe created the framework for fiscal stability and recovery.

“Each crisis has its own peculiarities. There has never been a question of overnight sovereign default and collapse of the common currency as there was nearly a decade ago; never that overnight headline. But the coronavirus has taken a magnifying glass to entrenched structural problems in the bloc that the last crisis’ recovery did not solve. For European leaders what was and is at stake is a slower burn: the competitiveness of the EU Single Market, the future of work, and negotiating leverage not among each other, but with the global economy. In negotiating immediate assistance and a six-year budget in one, the EU has set a framework (the proof will be in the implementation of course, and more will be needed) for fiscal stability and recovery. It is the United States, this time, that lives in fear of a fiscal cliff, and that overnight headline.”

A compromise that focused on the big picture.

“Not since the Nice Treaty negotiations twenty years ago has the European Council [summit] lasted so long. What came out of it is indeed a historic deal. Some may point to the downsides—such as priorities like climate and innovation not faring so well or the Frugals obtaining increased rebates—but, as any deal, it is a compromise that focused on the big picture items, namely ensuring a bold recovery plan.

“Three things are worth pointing out:

“The EU is allowed to borrow on financial markets to fund expenditure on a large scale. Although it is a one-off arrangement rather than a permanent fiscal union, it breaks a conceptual and ideological glass ceiling. Moreover, the deal contains interesting language, though not as forward leaning as initially anticipated, on developing the EU’s own resources, such as the plastic waste levy. Funding the EU through own resources rather than Member States contributions is important in moving the conversation away from calculations of net beneficiaries/contributors, thereby allowing a greater focus on spending priorities. Expect this to be picked up.

“Franco-German coordination on Europe is back in full swing. The joint proposal in May paved the way for the July deal at the European level. Macron and Merkel are reported to have operated as a tight-knit duo for five days—so much that “Merkron” has started trending on Twitter. This is Europe getting a key engine back. This has been years in the making, with important groundwork laid in the January 2019 Aachen Treaty and the June 2018 Meseberg Declaration.

“This is the first time the EU budget features a defense section. Although overshadowed by the recovery plan, it is a truly historic achievement—politically unthinkable a decade ago—that highlights the shift towards a more geopolitical Europe. In particular, the European Peace Facility, an instrument enabling the EU to equip partner military forces, is an underreported tool that might be worth keeping an eye on. The defense budget, however, is not as high as initially proposed, especially for Military Mobility and the European Defence Fund, so that getting prioritization right will be more critical than ever.”